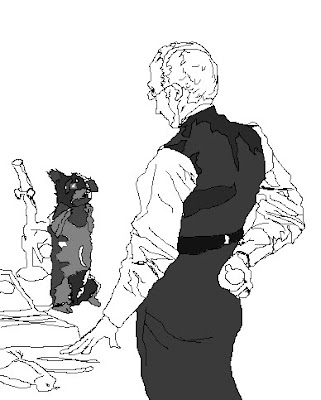 [From an engraving by C.J. Tomkins of a painting or drawing titled “Vivisection—the last appeal,” by John McLure (or McClure) Hamilton. The original work was exhibited in 1884. The engraving now resides at the Welcome Institute for the History of Medicine, London.]

A physiologist is not a man of fashion: he is a scientist, absorbed by the scientific idea which he pursues: he no longer hears the cry of animals, he does not sees the blood that flows, he sees only his idea, and perceives only organisms concealing problems which he intends to solve. -- Claude Bernard, 1865 (1)

Throughout history, but increasingly since the late 17th century, a small number of people have been restraining living, awake, resisting subjects and dissecting them, or otherwise causing them unremitting intense pain and fear. In the 1800s skilled vivisectors invented ways to keep animals alive throughout many hours of demonstrations and investigations, cutting into, cutting out, destroying, and otherwise mutilating ever more critical tissues and organs. Even after ether was introduced as an anesthesia in 1846, these monsters continued to inflict horrific suffering.

The early history of modern vivisection and the accompanying antivivisection effort has been researched and written about by a number of scholars; my purpose here is not to retell this dark and profoundly evil chronicle, but to note that the modern attitude regarding animals in research is rooted in this period and that today, the scientists spoken of and alluded to in this series of essays, are direct academic heirs to and adherents of the values established then. Few of them, of course, can today imagine themselves dissecting living screaming animals, but humans are notorious for their false beliefs about themselves.

Today, few people will say that they would have taken part in the Nazi persecutions, yet many people did. Given permission, and certainly when ordered to do so, the large majority of us will willingly do many evil things. But there seems to be a distinct and important difference between the large majority of us who do what we are told, and the small minority of us who choose on our own to do things that we know will cause great suffering. The first group are humans: error prone and gullible, but who naturally adhere to the Golden Rule; the second group are monsters.

An important part of this ancestry is various governments’ protection. People who did really gruesome things simply because they claimed that what they learned by doing them added to our knowledge or might be put to good use some day by medical doctors were more or less given free reign to harm animals any way that they liked. In the United States, this attitude was extended to African slaves; experimental surgeries were performed on them without anesthesia, for instance.

While human rights efforts eventually and severely curtailed (but have not ended) the use of orphans, blacks, prisoners, the mentally retarded, and other politically weak groups in harmful experiments, no similar gains were made for animals, and only cursory progress has been achieved even now.

Today’s monsters stand squarely on the shoulders of their predecessors. René Descartes (1596-1650), with his claim that animals do not feel pain, gave permission and encouragement to all who had been bothered by their similarity to us. According to Descartes, only humans have immortal souls, and thus, only humans have consciousness; animals are machines only and can experience neither pain nor pleasure. Descartes’ authoritative influence might be hard to overstate. He has been called the Father of Modern Philosophy, the Father of Analytical Geometry, and has had a profound influence on subsequent thinkers.

One eyewitness account from circa 1664 reports on Cartesians investigating the physiology of dogs:

They administered beatings to dogs with perfect indifference, and made fun of those who pitied the creatures as if they felt pain. They said the animals were clocks; that the cries they emitted when struck were only the noise of a little spring that had been touched, but that the whole body was without feeling. They nailed the poor animals up on boards by their four paws to vivisect them and see the circulation of the blood which was a great conversation. (2)

But even at that time, there were those who themselves were cutting into live animals yet questioned Descartes claims about animals not feeling pain. Those who believed that animals do have feelings and suffer under the knife are of a different kind altogether from someone who might be coaxed into physiological examinations of living struggling animals if they genuinely believe that the struggles are not indications of pain, a mind, and fear.

Among those who readily acknowledged animals’ pain, yet ignored it, were highly influential scientists whose persona was so strong as to establish a moral right to inflict great suffering. As we will see in the essay on Harry Harlow, this is a common character trait that has and continues to partially account for the enduring acceptance and support of vivisection by various facets of society.

In the early to mid 1800s vivisection became more widespread in Europe and the United States, due largely to the notoriety and influence of two French vivisectors, François Magendie (1783 – 1855), Chair of Experimental Medicine at the Collège de France, and his student and successor to the Chair, Claude Bernard (1813 – 1878), considered by some to be the father of experimental medicine. Magendie, Bernard, and their students performed public demonstrations that shocked even other experimental physiologists. In 1863, the Paris correspondent for The Times of London reported on the practices of Bernard’s students:

At the veterinary college at Alfort, a wretched horse is periodically given up to a group of students to experimentalize upon. They tie him down and torture him for hours, the operations being graduated in such a manner … that sixty and even more may be performed before death ensues.(3)

These “experiments” included dissections of the horses’ eyes, the viscera, and even the removal of the hooves. And all of this was done without benefit of anesthesia of any sort whatsoever.

It seems more than clear that the majority of us would never do such things to an animal or another human being, but it is undeniable that a few of us not only would, but do so with fervor and gusto. This behavior is so far outside the norm that it cannot be thought of as a normal human behavior. The only way to explain such behavior is to admit that there are monsters among us who do not hesitate to inflict misery and who find a certain joy in doing so.

It is precisely this moral and mental aberration that government has protected and encouraged when passing the occasional and always weak law limiting to a small degree what would be allowed. But such laws have come grudgingly and only after significant campaigns by the public demanding that such cruelties be stopped. Even today, in the United States, the law is quite clear; nothing per se is out of bounds; anything can be done to an animal providing that the institution approves it. The US Animal Welfare Act:

Nothing in this Act... shall be construed as authorizing the Secretary to promulgate rules, regulations, or orders with regard to design, outlines, guidelines or performance of actual research or experimentation by a research facility as determined by such research facility.(4)

The world of vivisection is populated by a race not like the rest of us. Simple kindnesses like adequate food and water and clean cages and bedding must be legislated in order to be more or less likely in the labs. Inspections by government agents have proven to be necessary to assure that such basics are more or less in
place. Even so, because the laws are weak, violations are common.(5) In the absence of oversight, conditions are bleak and cruel because the natural propensities of the vivisectors and the industry that supports them can operate true to their nature.