The Vilas Monkeys (Part One)

The Vilas Monkeys (Part One): The Ten-Year Anniversary of the University of Wisconsin-Madison’s Most Blatant Instance of Animal Cruelty and Lying to the Public. A Story of Cover-up, Conspiracy, Adultery, Battery, Disdain for Public Sentiment, and Crimes Too Unbelievable and Hideous to Discuss in Polite Company

In 1996, I learned that the United States government maintains giant facilities dedicated to using monkeys and chimpanzees as medical and behavioral research subjects. The details of the inherent cruelty of this endeavor motivated me to give up my teaching career and to dedicate myself to ending this publicly funded atrocity. [An extended essay Teaching Kindness [.pdf 250K] details the events in 1996/97 leading to my decision.]

When I first learned about the primate labs, I thought that the differences between those who worked in the labs or supported them and those who were working to close them was a simple matter of differences in honest opinion. Like past arguments over the use of Africans as slaves, it seemed to come down to whether or not anyone other that a human (or a white land-owning male) was deserving of some legally enforceable, stipulated set of basic rights. My error was based on the notion that honest people can have honest disagreements coupled with my then naïve view that the people working in the labs are as honest as most people.

In 1997, a year-long saga ensued over the fate of about 200 monkeys owned by the Wisconsin Regional Primate Research Center housed at the Henry Vilas Zoo in Madison. Shortly afterwards, I wrote an essay detailing some of that year’s events.

The Vilas Monkey Debacle and subsequent scandals involving the primate center make it plain and clear that primate experimentation attracts a subset of individuals lacking in some characteristics common to the public at large. Because we expect people to be fundamentally honest, it is easy for the primate researchers to consistently hoodwink the public and our policy-makers. 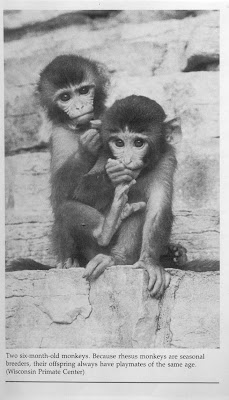 A partial chronicle of a few of the Vilas monkeys’ lives prior to their unforgivable betrayal by the primate researchers and the University of Wisconsin-Madison is contained in chapters three and four of Peacemaking Among Primates by Frans de Waal, originally published in 1989. Excerpts here and in subsequent Vilas essays are from the 1996 Harvard University Press paperback edition (pp 88-169.) Before quoting him, let me be clear: de Waal shares the responsibility for the torture that the Vilas monkeys and their progeny endured and continue to suffer. In some ways, because of his personal intimate knowledge of these animals’ lives, his guilt is of a darker more disturbing kind than the guilt of the Wisconsin vivisectors who have never pretended much concern for the animals.

When the initial story about the monkeys broke in the local press, there were three colonies of monkeys at the Vilas Zoo, two rhesus macaque colonies of 40 to 60 animals each and a colony of stump-tailed macaques of about the same size. According to de Waal, one of the rhesus colonies was among one of the last groups to be trapped in India and shipped to the U.S. prior to the Indian government’s ban on monkey exports. According to Deborah Blum in The Monkey Wars (Oxford University Press, 1994. p 120) the ban was enacted when India (and Bangladesh) learned from U.S. activists that the U.S. military was using the monkeys in radiation experiments, a violation of formal agreements with the U.S. that the animals would be used in medical research.

de Waal says that one of the rhesus colonies had been captured in Uttar Pradish, a state in the Himalayas in northern India. 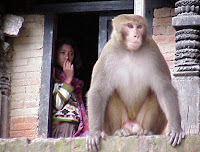 The monkeys found there are commonly seen in the towns and villages living commensally with the humans.

Following Jane Goodall’s (at the time) controversial method of identifying animals, de Waal named the monkeys he studied rather than assigning them identification numbers. He writes about the O-family: Orange, Oona, Ommie, and Orkid, and members of other families like Ropey, Beatle, Heavy, Kashew, Gray, Hulk, Mopey, and many others as he details their relationships and political maneuverings.

de Waal sums up his chapter about the rhesus monkeys with this:


The point is that their actions become more understandable if we assume that they have insight into the social network in which they live. Regarding them as beings with a rich social knowledge and a will of their own permits us to interpret data that would not otherwise make any sense. So I am talking here about a theoretical framework rather than a proven position. This framework, known as cognitive ethology, is more stimulating and promising than the classic view of animals as robot actors in a play that they hardly understand. Instead of arrogantly thinking that we human investigators fathom the meaning of nonhuman primate behavior better than they do, the impression never leaves me that it is the other way around. It takes thousands of hours of waiting and watching to reach a depth of insight into their social life that, in my estimation, is shallow compared to the insight of the monkeys themselves. (p 141; de Waal’s emphasis.)

The monkeys at the Vilas Zoo were observed and their behavior recorded and analyzed almost daily from the time they arrived in 1972, until they were shipped to Louisiana in 1998. They were the most carefully observed group of monkeys in the world. But, when it was discovered that they had also been the victims of the primate researchers’ repeatedly broken promises to the Zoo’s owners (Dane County and the taxpayers of the county), the university acted swiftly to send them to another lab and to raze the building that had housed them for two decades.

When I first wrote about the Vilas monkeys I hadn’t understood the events leading up to the formal agreement between the university and Dane County safeguarding the monkeys. I had thought that the agreement had grown out of public protests and pleas to protect the zoo monkeys from the experiments occurring to other monkeys just a short distance across town at the primate center.

It turns out that the public protests and reasonable letters of concern may have been insufficient in and of themselves. The catalyst for the policy was probably the vandalism that occurred at the zoo. Apparently, over a period of months, repeated graffiti critical of the zoo and its willingness to allow researchers to harvest monkeys from the zoo appeared on the monkey house to the great embarrassment of those who claimed to actually like and respect animals, as most zoo officials are wont to do.

Over the next months I’ll be writing periodically about the Vilas monkeys and things that happened during the university’s year-long campaign to get rid of them once their lies were exposed, once the public learned some of the ways the animals were being tortured. All-in-all, this is the single darkest mark on the university of which I am aware, and I am aware of a number of events since the Vilas debacle that are examples of a profound deficit of ethics and honesty.

There are still Vilas Zoo monkeys in the UW monkey labs.
at 1:00 PM