In the summer of 1964, the University of Wisconsin Primate Center, then under the direction of Harry Harlow, built a monkey house at the Vilas Park Zoo, a park owned and operated by Dane County, WI.

In 1972, the Primate Center received one of the last groups of monkeys trapped and exported from India. These animals were kept in the monkey house and eventually became the largest continually observed intact social group of rhesus monkeys in the world.

By 1989, much had been written about this group and two other groups that were also housed at the monkey house. Some zoo goers knew the monkeys by name. The monkey house was the top attraction at the zoo until it was destroyed.

In 1989, public protest had been unable to stop the university from harvesting babies for use in its labs. 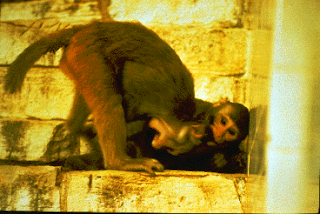 Animal rights oriented graffiti began appearing on and around the monkey house. As a result, the Primate Center promised the Henry Vilas Zoo, in a written document – signed by the Primate Center director, Robert Goy, five senior staff, and by the monkey house supervisor – that no animals born at the zoo would ever again be used in any harmful experimentation, and that, if the animals were sent elsewhere, they would remain protected by the agreement.

The primate center renewed this agreement in writing on two subsequent occasions over the course of six years.

In 1997, a whistleblower leaked documents that demonstrated unequivocally that within months of the first agreement, the primate center had resumed its culling and that over the intervening eight years, at least 201 monkeys had been secretly taken from the zoo, experimented on and killed in the UW labs, or were sold to other labs around the country.

A Dane County Supervisor introduced a resolution asking that the Dane County consider ways to pay for the care of the monkeys or to have them relocated to a sanctuary. The university vigorously opposed the resolution and argued strongly against it before three committees and the entire Board of Supervisors. The University said the monkeys were a health risk and too expensive for the county to care for.

In the end, the university successfully frightened Kathleen Falk, the Dane County Executive, into choosing not to use county funds to aid the monkeys. The Alliance for Animals found a sanctuary in San Antonio willing to take the monkeys; the sanctuary donated $15,000 to cover the transportation costs and initial care. The university refused to let the monkeys go there, calling it a “roadside zoo.” They shipped off two of the groups, the wild-captured group that had lived in the monkey house since 1972 and a second group, about 150 rhesus monkeys all told, on March 4, 1997, while people protested at the gate. 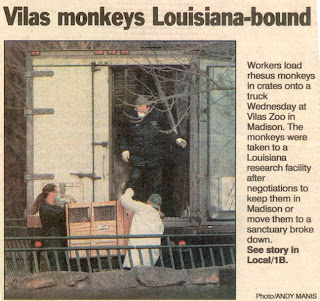 They were sent to the Tulane primate center where they endured ninety days of solitary confinement which Tulane termed quarantine. Their family groups were destroyed. Some were placed into breeding situations, some died (at least one during solitary confinement), others were experimented on and then killed.

The third group, about 50 stump-tailed macaques, was hard for the university to get rid of; no lab wanted them. They finally sent them to the same sanctuary that they had previously told Dane County Supervisors was a roadside zoo and far worse than a laboratory.

During the course of the agreement that they would not hurt the monkeys, the university secretly used and sold 201 of them, and then shipped 150 to Tulane. This amounts to 351 individual lies to the citizens of Dane County.

Once all the monkeys were gone, the university had the monkey house bulldozed and hauled away. It’s almost as if they didn’t want people to remember anything about the Vilas Park Monkeys.

This is only one of a number of occasions that the Wisconsin National Primate Research Center and the scientists working there have been caught lying to the public, violating scientific protocols or covering up the details of their experiments on monkeys.

Learn more at www.madisonmonkeys.com
at 9:49 AM

It may interest you to know that the "roadside zoo" to which the stump-tailed macaques were sent was more like an animal hoarding situation claiming to be a sanctuary. Inevitably, this "sanctuary" went bankrupt, but I know for a fact that the remaining stumpies made it out okay. They were relocated to a much larger, internationally financially supported, very private (no visitors) sanctuary elsewhere in Texas several years ago. They enjoy exploring spacious, heavily vegetated, open-top enclosures and remain housed as a very close-knit family. Some are getting up there in age, but an on-staff veterinarian keeps them all as healthy and comfortable as possible. Can't say how I know, let's just say a little bird told me ;)

Awesome. Thanks for the update.