These two confounding facts were again responsible for yet another HIV vaccine clinical trial being shut down.

Federal researchers have faced a major setback in the pursuit of an HIV vaccine, shutting down a clinical trial on Thursday after determining that volunteers who received the vaccination shot were more likely to contract the virus than those who were given a placebo. The vaccine also failed to reduce virus levels in the blood of volunteers who contracted HIV, according to the National Institute of Allergy and Infectious Diseases (NIAID). ...

The study began in 2009, and researchers had immunized half of the 2,504 volunteers with a DNA-based vaccine called HVTN 505 that was intended to “prime the immune system to attack the AIDS virus. Then a different vaccine, encasing the same material inside a shell made of a disabled cold virus, acts as a booster shot to strengthen that response. Neither vaccine could cause HIV,” according to the Associated Press.

Results from a series of nonhuman primate studies influenced the decision to expand the HVTN 505 trial, says Dieffenbach. Animal data showed that about half of rhesus macaques given a simian immunodeficiency virus (SIV) vaccine regimen similar to the HIV vaccine regimen used in the HVTN 505 trial were protected against SIV following SIVsmE660 challenge, and that a low level of neutralizing antibodies to Env, and an Env-specific CD4+ T-cell response correlated with this protective effect.

Dieffenbach says the large number of animals (129 macaques) used in the study, and the fact that the protection occurred in the presence of robust cellular responses and low levels of SIV-neutralizing antibodies, suggested that the HVTN 505 regimen could have the capacity to prevent HIV acquisition in people. “You are only as good as the data you have in front of you,” says Dieffenbach, reflecting on the expansion of the HVTN 505 trial. “We [haven’t had] many efficacy trials and if we have the opportunity and there is plausibility, we need as a field to take a chance.”

Davidson and his guru back in the news

Now read this by the same author: http://www.madisonmagazine.com/Madison-Magazine/June-2008/Its-a-Jungle-in-Here/#.UXH_KJ2ZGmg.facebook

This is the video linked in the above article.

University of Wisconsin-Madison vivisectors Ned Kalin and his colleagues have come under criticism, both from people who abhor cruelty, and even from some with somewhat similar sensitivities who work within the university's guarded walls.

How might a public relations department go about diffusing the criticism or work to set the stage to defend itself from future criticism?

One way to confuse the public, to mislead any nosy independent journalist, or to just build the walls of illusion a little bit higher would be to claim importance where little to none exists.

This is a very common vehicle for spin doctors. Dramatic medical breakthroughs are announced by university PR departments almost every day; and yet, articles written by less biased observers, by people not being paid to hype their institution's work, convey a much different picture. See for example:

The Medical Revolution: Where are the cures promised by stem cells, gene therapy, and the human genome? Emily Yoffe. Slate. Aug. 24, 2010.
Why Almost Everything You Hear About Medicine Is Wrong. Sharon Begley.

In my last post, Conflicts of Interest, I pointed out some of the glaring conflicts of interest that limit legitimate reporting of controversies involving the University of Wisconsin-Madison's use of animals.

I failed to notice another staff member of the Department of Life Sciences Communication (LSC) who is yet another previous staff writer for the Wisconsin State Journal. Coincidentally, the university recently issued a release about a newly published paper by Ned Kalin, et al. The release was written by LSC Senior Lecturer, Susan Lampert Smith.

The university's news release hyping this new paper must read like something from America's Finest News Source to clinical psychiatrists and others with even a passing familiarity with neurosurgery. The fundamental claim, in much of Kalin et al's work is that by identifying areas of the brain associated with some disabling mental affect like severe anxiety that it will be an easy next step to drill a hole through someone's skull and fix them or to come up with a new miracle drug. 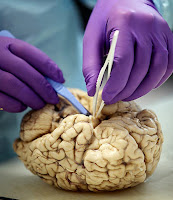 But right now, brain surgery is relatively crude. Surgeons remove tumors, ablate small regions, and perform some vascular repairs. The idea that we are anywhere close to having the understanding and ability to fix a part of the brain associated with something as complex as a disabling emotion is like saying a surgeon could fiddle with your neural pathways and give you an extra hundred IQ points if only we knew where in the brain geniuses differ from the average Joe. An analogy from history is William Harvey' small book on the heart and circulation published in 1628. The first cardiac surgery wasn't conducted for another two-and-a-half centuries, until 1895, and the heart-lung machine wasn't in use until the 1950s. Arguably, Harvey's observations were so far ahead of the technology needed to put them to use that that they were of no material value at all.

But you can just imagine the hype that the UW spin doctors would have made of it.

And a new miracle drug that will be more effective than the drug therapies currently available, as a result of some brain scans on frightened young monkeys? Any celebration is premature. Kalin is a psychiatrist, not a pharmacologist or even a chemist.

The release about Kalin's new publication, written by LSC Senior Lecturer, Susan Lampert Smith, says that "this line of research sets the stage for improved strategies for preventing extreme childhood anxiety from blossoming into full-blown anxiety disorders." Unfortunately, that's far-fetched nonsense. It is an example of invented importance. It is a fabrication widely divergent from the plain facts. But that's the nature of propaganda.

Nothing in a brain scan or a dissected slice of a young frightened monkey's brain is going to help anyone prevent extreme childhood anxiety from blossoming into a full-blown anxiety disorder. The prevailing opinion is that childhood anxiety disorders often go undetected or untreated and that early identification and intervention is of great importance. To put Kalin's announcement of having identified brain regions associated with fearfulness in young monkeys into practice, it would appear that every preschooler will need a brain scan. A wholesome breakfast for all kids might be a better goal.

Kalin et al have been "setting the stage" for better care of anxious children for decades by frightening baby monkeys, burning away various regions of their brains, killing, and dissecting them. The stage has become very dusty and bloody. No one has yet been able to write a script that incorporates the frightened monkey "discoveries" into a story line that concludes with better care or treatments for anxious children.

Clinical pediatric psychiatrists are unlikely to glean much from this latest hyped announcement that will help them help their patients. Where are the cures and preventions? They're certainly not hiding in Kalin's experiments on fearful young monkeys. In spite of the spin doctoring by LSC staffers.

In the process of writing this I stumbled across an interesting article written by a Wisconsin State Journal reporter on the Association of Health Care Journalists website: Reporter offers advice on avoiding embarrassing incident. The reporter blames himself for an unfortunate incident, but it seems to me that the university might have been so focused on some good PR that they just couldn't think of anything else. Notice too, the name of the UW Hospital "PR person" near the end.

You may find this article worth reading if the general topic of research into anxiety is of interest: Understanding the Anxious Mind. NYT Magazine. September 29, 2009.