Where are the Monkeys?

Here's a set of satellite images of the eight NIH national primate research centers and the New Iberia Primate Center. These are links to Google maps.

Note: For whatever reason, the links sometimes go to just the map. You might need to click Satellite or Hybrid in the upper right hand corner to access the satellite image.

California National Primate Research Center University of California, Davis. Davis, CA. Just under 5000 monkeys acording to PIN. They are working to increase the population to 7000.

New Iberia University of Louisiana at Lafayette. (Sometimes refered to as the University of Southwestern Louisiana.) New Iberia, Louisiana. New Iberia is so large that it is difficult to get it all into a single image that is recognizable. The main entrance is to the north of Hanger Drive. The main entrance is marked by the large circular building. The dots in ordered rows are all corn cribs. 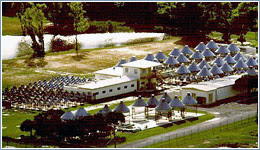 The row of buildings along W. Admiral Doyle Drive, include the chimpanzee housing. Continuing south along W. Admiral Drive, you can make out additional rows of corn cribs that I have always assumed is the SPF colony. According to PIN, there are about 5000 primates here.

Oregon National Primate Research Center Oregon Health Sciences University. Hillsboro, Oregon. Oregon once billed itself as the largest supplier of rhesus macaques in the U.S. The large rectangular areas are outdoor breedoing corrals. There are just under 4000 monkeys, according to PIN.

Southwest National Primate Research Center (really, just the Southwest Foundation for Biomedical Research.) San Antonio, TX. The circular corrals are, I think, where the 3000 baboons are held. According to PIN, there are about 3500 primates here, including 250 chimpanzees.

Tulane National Primate Research Center. Covington, LA. The buildings north of Three Rivers Road are the labs and administration buildings. To the south is the giant outdoor cage area. There are close to 4500 monkeys here, according to PIN. But the data is not up to date. There are probably more. If you zoom out, you can see that there is green space leading all the way to Lake Pontchartrain. This is generally subtropical Louisiana swamp forest, much better habitat for a macaque than the mesh cages they are in right now.

Washington National Primate Research Center. University of Washington. Seattle, WA. Tucked away within the Hutchinson Health Sciences Cenetr, once billed as the largest area under one roof in the world, are 1000s of monkeys. Wahington has colonies scattered across the globe. PIN doesn't mention a number.

This is the Yerkes Field Station in Lawrenceville.