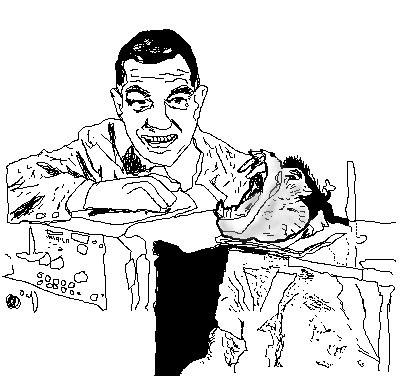 [From a photograph titled “Dr. Nello Pace and monkey, December, 1966, UC Berkeley,” by Ansel Adams. The original may reside in the California Museum of Photography, University of California, Riverside.]

I must have been about eight or nine years old, maybe I was ten, but I’m certain it was before fifth grade, when I went to the drive-in with my brother and two of his friends, who were, I think, also brothers; I don’t recall their names. My brother was driving. I was in the back seat with one of the brothers. My parents might have made him take me along in exchange for borrowing the family car, a 1959 Oldsmobile Super 88 hardtop convertible. They were all much older than me. We saw a double feature. The two movies were the 1956 The Black Sleep and the 1961 Black Sunday. I’ve never forgotten about them and wonder about their influence on my life.

Of the two movies, Black Sunday scared me the most; it frightened the bejeezus out of me. Looking back, I think this must have been around Christmas vacation because one scene was so utterly frightening that I buried my face in the lap next to me. I remember it being a heavy wool peacoat. That’s the sort of thing that someone would wear for only few months in the winter in Houston.

It must have been around Christmas vacation because I didn’t have to go to school for a few days afterward. This detail might be uninformative though, because I don’t think I was capable of going to school. I experienced a feverish mania. I was so distraught that I drove my mother out of my room with my screams. I remember saying that she was staring at me and wouldn’t stop. My brother was able to come into my room without setting me off. I was hallucinogenic. I remember believing then and afterward that Black Sunday was the reason for my fear and craziness. My mother’s eyes seem to have reminded me of a main character in the movie.

My fright-induced madness isn’t completely surprising. Bravo TV ranked one of the scenes in Black Sunday 40th in its 2004 mini series, the 100 Scariest Movie Moments. I was about nine years old.

But The Black Sleep seems to have had a more lasting impact on my life.

“Beyond any terror ever known.

“Pass through a mad man’s hell-fire.

“Enter an ancient abbey’s secret passage into the most terrifying torture dungeon from the medieval past.

“Shocking victims of a famous brain specialist gone berserk, plunging you into a reign of terror.

“A horror beyond belief; feeding on beauty; lusting to claw the world apart.”

The Black Sleep, sometimes billed as Dr. Cadman’s Secret, is out of print, maybe for films one says ‘out of production.’ But I found someone peddling homemade DVDs of the film on the Internet. So, after nearly 50 years, I watched it again.

When I was in seventh grade, there were two boys who wore steel leg braces. Maybe they were among the last unvaccinated polio victims – I don’t know what had crippled them. They were both meaner than the other students. The meanest one, Gary, had a brace on each leg; he was two or three years older than everyone else and had probably been held back in elementary school. Gary would pinch you very hard if you came within an arm’s reach of him. I learned to stay away from him, as did every other seventh grade wimp. The other kid, who I’ll call Wayne, but I don’t remember his name, had a brace on only one leg. Circumstances and what I took to be their common need to appear tough made them allies.

I sat behind Wayne in English and got to be friends with him while we both failed the class. Gary sat off by himself on the side of the room; the teachers had learned that he should be kept away from the rest of the students. But because I made friends with Wayne, Gary came to accept me more or less; at least he didn’t try to pinch me quite as much. Sometimes, they would take off a leg brace and use it to intimidate the students sitting around them.

For a while, and periodically for many years, I had a recurring nightmare about Wayne and Gary. I dreamed that their legs were crippled because they were being used in medical experiments. I was at once sickened by the condescending and sickly sweet attitude of the doctors and nurses using them. I was deeply disturbed by the boys’ pitiful cries and their fear.

Now, in hindsight, I think that my dreams about them were somehow kindled by a lasting reaction to The Black Sleep.

The Black Sleep may be responsible for many of my attitudes. When I began learning about the Holocaust, the facet that affected me the most, and continues to haunt me, was the fear people experienced when they thought the Nazis were coming for them, particularly for medical experimentation.

Over time, I have learned that scientific experimentation on unwilling or unsuspecting human subjects has been a common occurrence; it continues today. Books on this topic take up a few feet of shelf space in my library.

Another area that has attracted my attention is animal mind. This grew out of my interest in animals generally. We always had pets when I was growing up; my parents readily and regularly acknowledged them as individuals with distinct personalities.

There was never any hint that they weren’t alert and mentally present.

At some point, as I began learning the details of laboratory research using animals, I was struck by how like Dr. Cadman the vivisectors are. My visceral reaction to the animal experiments was the same one I had upon learning details of the Nazi’s human experiments and to my dreams about Gary and Wayne. At the forefront of all my feelings was a distinct gut-tightening utter distaste for the scientists doing these things.

Monsters come in various forms. There’s Godzilla, Dracula, the Creature from the Black Lagoon, giant spiders, ants, subterranean worms, The Blob, and various and sundry other eerie bugaboos, but the real standouts have human form. From fiction, we recall Mr. Hyde, Dr. Jekyll’s evil alter ego and the movie version of Dr. Frankenstein’s monster. But more creepy are the otherwise completely normal characters like Dr. Cadman, played by Basil Rathbone, in The Black Sleep.

In his secret laboratory he conducts experimental brain surgery on humans and then chains his victims in a dungeon, in a sort of dismal sideshow-like collection of freaks. His victims have had different results depending on the part of their brain he operated on. One hulk of a man is blind and grunts unintelligibly, another believes he is a character from the Old Testament; a woman is covered in patches of hair and cackles with hysteria. Another, Lon Chaney, is an imbecile with a murderous bent who Cadman keeps around as a sort of pet; Chaney’s character, Mongo sleeps curled up in a hallway. Cadman’s butler, Bela Lugosi, another victim, is mute. Dr. Cadman is doing his research in order to find a way to operate on his wife who has been a coma for a few months.

In one scene, he is operating on a new victim and is being assisted by a new assistant, John Carradine, who does not realize that the man is alive. The man later develops a grotesque facial tumor-like growth as a result of the experiment. That’s him just below. Cerebral fluid spurts out when Dr. Cadman cuts his brain. Carradine is shocked when he realizes that the man is alive. 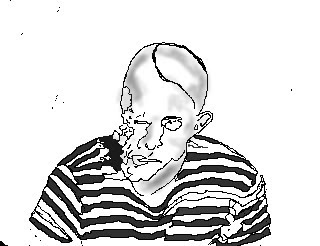 [From a screen shot of the movie The Black Sleep. The actor is George Sawaya.]

He challenges Dr. Cadman, who replies: “Why be short sighted? You must take the long view, the important view of what this will mean for humanity.”

“In the interests of science, anything, anything is justified,” says Cadman.

Cadman’s victims have become monstrosities, but he is the monster.

Doctor Moreau is another such character. On his infamous island he is surgically mutilating animals and twisting them into human forms.

He is asked, “Where is your justification for inflicting all this pain? The only thing that could excuse vivisection to me would be some application – ”

He answers: “In my view – in my view. For it is just this question of pain that parts us. So long as visible or audible pain turns you sick; so long as your own pains drive you; so long as pain underlies your propositions about sin, – so long, I tell you, you are an animal, thinking a little less obscurely what an animal feels. This pain –

“Oh, but it is such a little thing! A mind truly opened to what science has to teach must see that it is a little thing. It may be that save on this little planet, this speck of cosmic dust, invisible long before the nearest star could be attained – it may be, I say, that nowhere else does this thing called pain occur. But the laws we feel our way towards – Why, even on this earth, even among living things, what pain is there?”

He goes on to explain his motives: “... I went on with this research just the way it led me. That is the only way I ever heard of true research going. I asked a question, devised some method of obtaining an answer, and got a fresh question. Was this possible or that possible? You cannot imagine what this means to an investigator, what an intellectual passion grows upon him! You cannot imagine the strange, colorless delight of these intellectual desires! The thing before you is no longer an animal, a fellow-creature, but a problem! Sympathetic pain, – all I know of it I remember as a thing I used to suffer from years ago. I wanted – it was the one thing I wanted – to find out the extreme limit of plasticity in a living shape....

“To this day I have never troubled about the ethics of the matter... The study of Nature makes a man at last as remorseless as Nature. I have gone on, not heeding anything but the question I was pursuing.”

At least Cadman was hoping to save his wife; Dr. Moreau was driven by simple curiosity and a sense of power. Like Cadman’s and even Dr. Frankenstein’s, Moreau’s victims were monstrosities, but they weren’t monsters. The monsters were the scientists who made them.

More disturbing is the fact that such evil isn’t something that happens only in fiction or happened only in the past, it’s still happening – modernized, industrialized, and underwritten by taxpayers.

The essays in Monsters look briefly at the historical roots of modern vivisection and then showcase recent and current instances – every bit as horrific as the careers of Dr. Cadman and Dr. Moreau. Monsters are living among us.
at 1:10 PM