Max Rosenbaum: Beware of risky flu virus research
I strongly concur with the epidemiologists from Harvard and Yale who warned about the potential release of a possible virulent virus in the June 12 article about UW-Madison flu research. State Journal reporter David Wahlberg reported that UW-Madison ...
UW-Madison flu studies raise risk more than prevent it, biosafety panelist says
at 5:54 PM No comments: 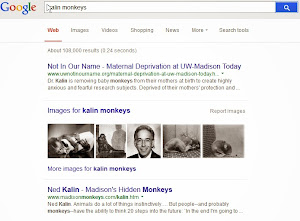 Ironically, Dr. Robert N. Golden claimed that Dr. Murry Cohen's letter included distortions and misleading claims. But his rebuttal was richly spiced with errors and an altogether odd misunderstanding of Kalin's work given the fact they are both psychiatrists.

I don't think it is a coincidence that Dr. Golden is defending Dr. Kalin's research. Over a five year period, Kalin's project will receive $1,749,018 in tax dollars. At least a few cents of it will end up in Dr. Golden's check.

Dr. Golden claimed that Ned Kalin's past experiments on monkeys have demonstrated "that high levels of anxiety early in the lives of monkeys ... can result in the development of severe disabling anxiety." I can only guess, but it appears that Dr. Golden (or whoever wrote the letter for him) merely skimmed the titles of few of Kalin's papers. And certainly, the words "anxiety" and "primates" appear frequently in the titles. But Kalin does not appear to have ever published a paper on the subject of early anxiety causing severe disabling anxiety later in life. Most of the monkeys used in Kalin's anxiety related experiments are killed in the course of the experiment. Further, the anxiety in monkeys he has been studying over the past decades is a characteristic he and Richard Davidson found to be a "trait-like" characteristic of certain monkeys. Kalin's previous work based on this apparent genetic trait is not very closely related to the maternal deprivation experiments underway.

Dr. Golden says, "Kalin’s work seeks to uncover new understandings of the brain alterations that underlie anxious children’s high risk for these illnesses." That is what Dr. Kalin claims, but an examination of his hypotheses, his experimental design, and his past research using monkeys fatally undermines Dr. Golden's description. Kalin himself says that he is trying to find a miracle cure, a one-size-fits-all treatment for poor parenting and all forms of child abuse. He hopes that he might be able to actually prevent the problems associate with poor parenting with a pill for children based on the brain chemistry of emotionally and socially deprived infant monkeys.

Dr. Golden seems to know that about Kalin's goal. Dr. Golden says: "These insights can lead to effective early interventions for preventing the long-term effects of serious psychiatric disorders in at-risk children." Probably not. The interventions that are needed would be much more likely if the money being used by Kalin was given to local mental health service organizations.

Dr. Golden claims that Dr. Cohen's use of the term maternal deprivation is just the use of a "shocking catch phrase" used by animal rightists, and that in fact, the babies will be raised in a "nursery" "with their peers" "the way some farm animals are raised' "but with more care." And this absurdity: "While away from their mothers, the monkeys will live with and socially interact with their peers." Dr. Golden may be a gifted administrator for all I know, but he seems not to have a clue about how the monkeys are being raised.

Kalin's protocol is even available on-line thanks to the Alliance for Animals, Dr. Golden should have read it. The monkeys will be taken from their mothers within 24 hours of birth and housed completely alone for up to six weeks. Such individual housing of infant monkeys is a known detriment to them. Then they will be put with another infant of the same age who was also maternally deprived. These monkeys will never know their mothers, yet Dr. Golden says, "While away from their mothers, the monkeys will live with and socially interact with their peers." The so-called "interactions" in such deprived infants amount entirely to clinging to each other. And then Dr. Golden makes the wild leap: "This mild level of early adversity is designed to model the early life stress and adversity associated with unfavorable rearing and abandonment, which occurs all too frequently in humans around the world."

There is nothing "mild' about keeping a baby alone in a box; nor is it "mild" to put two babies in a box. I suspect that if human children were being kept like this, Dr. Golden would call it something other than "mild adversity."

Dr. Golden asks rhetorically "Why is this study important?" but he guides readers away from the real answer. Dr. Golden fears, just as everyone who experiments on animals does, that if the public actually raised its voice in concern (fat chance) that the seeming infinite fount of tax revenues flowing into the university to pay for experiments like Kalin's, which help pay his salary, might be slightly reduced.

Golden says, "Kalin’s lab is now on the threshold of identifying specific molecular targets for new treatments for anxiety and depression." Every lab in the country receiving tax dollars is always "on the threshold" of some major breakthrough that somehow never seems to pan out.

Dr. Golden saves his wildest claims for the end of his rebuttal. He says, "UW-Madison encourages healthy debate about the role and limitations of animal models in biomedical research." But it doesn't. He is either confused or just being the propagandist. There are occasional lectures and a few questions from the audience. There is no "healthy debate" about the use of animals; the tax dollars raining on the university to support animal experimentation do a pretty admirable job at silencing any hint of such debate.

Dr. Golden says, "These discussions, often led by our bioethics faculty, are important to our public service mission." There are few discussions. The one bioethics faculty member involved in these show pieces has been so co-opted by the situational pressures that he has become part and parcel of the problem.

Dr. Golden repeats the standard pro vivisectionist line: "We believe the use of animals in research should be limited to those situations where there are not effective alternatives, and where the goal is the advancement of human health." But no one at the university involved in the use of animals really believes this. It sounds good, they think, but as their actions and the experiments they approve go to show, they really believe the use of animals should be limited only by the money that can be garnered to pay the salaries of the people conducting the experiments.

Dr. Golden says: "There are multiple levels of review for any proposed animal study, which includes oversight from outside the university as well as from within." I wonder if he has access to government grown weed?

Golden digs way up into his ass to pull out his final gem: "Patients and their families are counting on his work to provide new insights into these devastating psychiatric illnesses and the development of new treatments and better prevention strategies." No one is counting on Kalin for anything but some more money for the university, and Golden knows it. His spin on Kalin's work is mere propaganda, meant to confuse and delude. His letter is but another example the abuse of authority so common today; there is no honor or honesty among those who experiment on animals or those whose salaries are somehow dependent on the atrocities that occur in the labs.