Vivisectors write and say some pretty dumb things pretty regularly. Check this out: 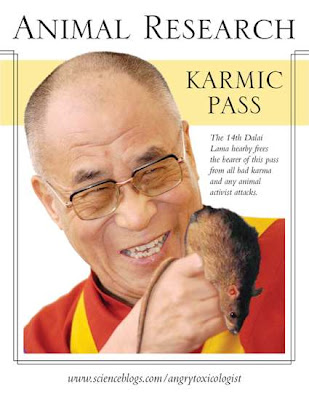 The author of this poster writes:

I should note that this isn't meant to poke fun at his Holiness; in fact, I respect him. It's a way of showing how absolutely outside of any accepted moral realm these violent extremist are. If done right, Bhuddists are with us! Who's with the extremists? Nobody. Well, at least no one in their right (or left, or any) mind.

A couple of observations spring to mind...

The host for this guy's blog (gal's?) is Scienceblogs. The only thing that makes these people froth at the mouth more than they do over animal activism is mention of a spiritual realm. Fair enough, but this odd embrace of the Dalai Lama discloses the very shallow nature of what passes as thought among vivisectors.

Mention of "flood geology," "creation science," or "intelligent design" can set off long strings of comments about the sanctity and supremacy of science and rationality. Again, fair enough. So how odd is it that vivisectors deny fundamentalist Christianity and then embrace the opinions of someone who has been taught since the age of two that he is the living reincarnation of his predecessor the 13th Dalai Lama, and thus an incarnation of Avalokitesvara, the "Lord who looks down," the Buddha of Compassion?

What is it about "his" Holiness that this toxicologist respects? S/he obviously knows very little about "Bhuddists." Maybe they're from Bhutan? This careful attention to detail is likely seen throughout this toxicologist's misery-filled work.

The toxicologist "explains" the poster: "It's a way of showing how absolutely outside of any accepted moral realm these violent extremist are." What gibberish is this?

Toxicologist must not know what was taught by Siddhāttha Gotama. Among the Noble Eightfold Path are the recommendations to engage in Right Action and pursue a Right Livelihood.

Right Action includes things like abstaining from killing and being merciful and compassionate to all living beings. Nothing like the Dalai Lama, that callous prick.

Right Livelihood is based on the concept of harmlessness and includes the admonishment not to engage in trades or occupations which, either directly or indirectly, result in harm to other living beings. Nothing like most toxicology.

In point of fact, the only reasons that toxicologists and other vivisectors embrace Tenzin Gyatso is that His Holiness has embraced a meat based diet and vivisection, things entirely at odds with classic Buddhism.

Their new spiritual guide, Tenzin Gyatso, swooned at the power of technology; living in what was essentially a medieval pre-scientific feudal society based on serfdom and ancestor worship, Tenzin was bedazzled.

Tibet and the Dalai Lama became cause celebres as dual victims of the dirty Red Chinese communist bastards. He was catapulted to international fame, with every star and leader in the western world literally stumbling over themselves to have him bless them or at least be photographed with him -- all they can think of is Shangri-La. It's easy to see how he lost his bearings.

It makes perfect sense that vivisectors now raise up on their shoulders this very confused man and declare themselves right with karma and a part of the "accepted moral [no doubt, sacred] realm."