Hey UW! Nothing to hide? 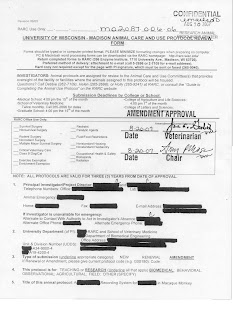 (Click on the images to see a larger copy.)

When government hides details of its activity it undermines the American ideals of government of the people and by the people.

These ideals are fundamental elements of democracy. Simply, you can’t make an informed decision or offer an informed opinion regarding publicly funded and regulated government activity unless you know what is going on. When government blocks access to information about its activity, citizens should be alert to the strong possibility that it is doing so because it speculates that public knowledge of its activity would lead to a loss of revenue or power.

UW Madison, like any other governmental body, is required to provide copies of documents to the public when those documents were produced using public funds. Generally, only the location of animals, trade secrets, and personal information of its employees can be legally censored from public view.

When it comes to information regarding animal experimentation, the general guidelines for what is hidden from public view include the locations of animals (ostensibly to stop someone from liberating them), trade secrets--like the names of proprietary investigational drugs and devices (in order to protect possible future patents), and personal information on the individuals involved in the research (in order to protect their privacy.)

When universities are accused of keeping details of their experiments on animals secret, they generally protest that they aren’t hiding anything because researchers’ publish papers that describe their experiments in scientific journals available to the public. But it is a simple observation of fact that the details published in the journals are far less specific than the descriptions and explanations in the written protocols researchers submit to their universities and funding agencies—usually an institute within the NIH.

The proof is in the pudding. The University of Wisconsin, Madison is always being asked for copies of documents associated with its use of animals. I doubt that there has been even a moment in recent years that there hasn’t been a public records request sitting on someone’s desk and awaiting a response. 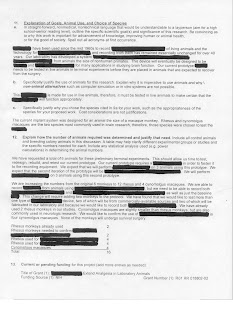 It's pretty clear that what's being hidden here is something other than the location of animals, trade secrets, or personal information. 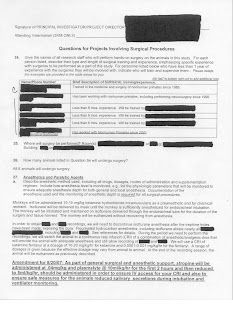 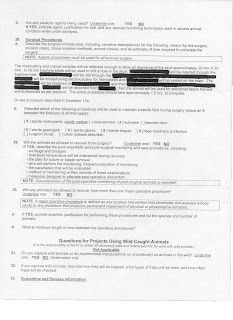 Can you imagine writing to anyone or speaking to anyone about this public funds expenditure? Dear Senator Fiengold, I'm concerned that [something] is being done to monkeys in order to prove? show? develop? [something] by [doing something] to them!

It seems clear that the university simply doesn't want the public to know what it's doing with the public's money. Nothing to hide?

What's so not amusing is that NIH also allows a PI to censor their grant information but not filling in any data.

Abstract:
This abstract is not available.


There are no thesaurus terms on file for this project.