Hey kids! Bored? Summer too long? Why not try a little dissecting?

“Actually, no one wants to experiment on animals.” Dr Mark Matfield, director of the Research Defence Society.

You hear similar statements all the time. Vivisectors claim that they don’t like using animals, but simply have to. This seems pretty weird to me since at least some of them like to hunt and fish. (I have no idea what the dicks with this dead bear do for a living.) 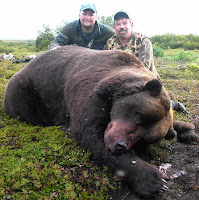 I’d be surprised if at least some Spanish vivisectors aren’t bullfighting fans.

And, there can’t be very many vegan vivisectors. People have always enjoyed the blood sports.

So, it seems that they must be saying that vivisection is the one area of
animal use that is problematic. It’s pretty clear, I think, that they are trying to cast themselves in a good light rather than making an honest statement.

The silliness of their claim is apparent when one considers that many people like to watch others be hurt or killed. It isn’t farfetched to imagine that people who like to hurt animals or who don’t have qualms about hurting them would be natural candidates for work in the labs.

Here in Madison, WI, the local school district sponsors a collection of summer classes. Together, these are under the direction of Madison School & Community Recreation (MSCR), the public recreation provider for the residents of Madison (within the boundaries of the Madison Metropolitan School District).

As you might imagine, given the “recreation” focus, area residents and students can learn how to make balloon animals, learn Spanish, go canoeing, learn digital photography, how to sail, dance, or learn many arts and crafts. And kids can dissect animals. That sounds like fun.

The dissection class is called Zoology. It targets students in grades five through eight.

ZOOLOGY
Do activities dealing with the zoological world such as dissection and animal behavior. Each student receives a white rat to care for 24 hours a day. Adoption option at the end of the program. On the first day of class, bring small cage, water bottle, pencil and pocket folder. [Emphasis in the original.]

Students will dissect a fetal pig, a frog, a clam, a starfish, a crayfish, and a perch.

The students will “socialize” their rat with others’ during the class.

The two week-long class runs for an hour and fifty minutes, plenty of time for in-depth study of these dead animals’ anatomies, don't you think?

The enrichment coordinator, Welda Simousek, explains that the instructors feel that the “dissection experience is crucial for students who may be encouraged to pursue a medical field in the future…”. Crucial.

I don’t suspect that more than a very few of the 10, 11, 12, or 13-year-old students who take this “class” will go on to be medical doctors. What does seem clear is that they are being taught that these animals’ lives are worth two weeks of their summer boredom. I suspect that children exposed to this indoctrination are more likely to become vivisectors than medical doctors. And, when they do, they too will make up stories about how they wish they didn’t have to experiment on animals.