Rats Know What They Know 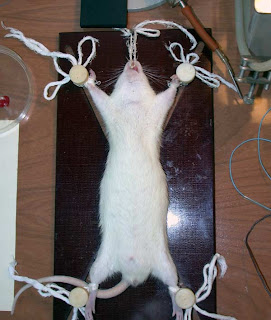 The history of bigotry is the history of false claims about the superiority of a particular group or the inferiority of another. The arguments, when rationality is claimed as a basis, always hinge on the claim that we (historically, men, white men, white men owning property, Americans, Europeans, the rich, or just humans) have characteristics and sensibilities that they (historically, women, people of color, or different ethnicity, religion, or language, the poor, mentally retarded people, people with disabilities, or just animals) do not.

In the case of the human/nonhuman animal dichotomy, this has traditionally taken the form of various claims about so called "human characteristics." These have been things like using tools, making tools, emotions like grief and joy, self-sacrifice and altruism, and as often as such characteristics have been proposed as the reason killing or hurting a human is illegal but hurting an animals is sport, a livelihood, our culture, or science, the proclaimed justification has turned out to be present in species other than Homo sapiens.

Recently, the gatekeeper has been something called metacognition, or knowing what ones knows. But even here, the wall has been breached as Foote and Crystal report below. Worse news for the defenders of human bigotry, this "human" characteristic isn't being found in just other primates, but in rodents as well.

About the only arguments left for those who defend the claim that we have some right to hurt members of other species are religious or might-makes-right sorts of claims.

The ability to reflect on one's own mental processes, termed metacognition, is a defining feature of human existence. Consequently, a fundamental question in comparative cognition is whether nonhuman animals have knowledge of their own cognitive states. Recent evidence suggests that people and nonhuman primates but not less "cognitively sophisticated" species are capable of metacognition. Here, we demonstrate for the first time that rats are capable of metacognition--i.e., they know when they do not know the answer in a duration-discrimination test. Before taking the duration test, rats were given the opportunity to decline the test. On other trials, they were not given the option to decline the test. Accurate performance on the duration test yielded a large reward, whereas inaccurate performance resulted in no reward. Declining a test yielded a small but guaranteed reward. If rats possess knowledge regarding whether they know the answer to the test, they would be expected to decline most frequently on difficult tests and show lowest accuracy on difficult tests that cannot be declined. Our data provide evidence for both predictions and suggest that a nonprimate has knowledge of its own cognitive state.