I occasionally read the vivisection trade magazines just to see what the industry is telling itself. You can glean some interesting tidbids now and then.

I was recently given a new issue of one of these magazines, Lab Manager and discovered a featured cartoon strip named Lab Bratz. And wouldn't you just know it, the writer is a lab manager at a lab at the University of Wisconsin, Madison.

The episode in Lab Manager caught my eye because it it was so offensive: 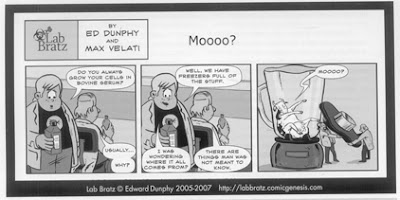 The on-line color original is here.

The frame of the live cow in the giant blender is of course just a comedic device, and it isn't what struck me as sufficiently offensive to write this. What caught my eye were the topic and dialog:

Fat dumb scientist: "Do you always grow your cells in bovine serum?"

FDS: "Well, we have freezers full of the stuff. I was wondering where it all comes from."

BDS: "There are things man was not meant to know."

The funny reality behind what we are not supposed to know is that bovine serum is usually fetal bovine serum. Here's an on-line ad:

Available in USDA or US Origin-See full list for pricing

The production of this material (especially in light of the availablity of human serum and artificial serum) is ethically controversial. See for instance:

The use of fetal bovine serum: ethical or scientific problem?

Fetal bovine serum (FBS) is a common component of animal cell culture media. It is harvested from bovine fetuses taken from pregnant cows during slaughter. FBS is commonly harvested by means of a cardiac puncture without any form of anaesthesia. Fetuses are probably exposed to pain and/or discomfort, so the current practice of fetal blood harvesting is inhumane. Apart from moral concerns, several scientific and technical problems exist with regard to the use of FBS in cell culture. Efforts should be made to reduce the use of FBS or, preferably, to replace it with synthetic alternatives.

The entire paper -- providing more than you may want to know about this issue -- is available here. This probably isn't a funny topic to anyone other than those deadened to suffering in the labs.

I can just imagine these clipped and tacked to the bulletin boards in labs around the country: "Man, that rat suffering with the tumors is just so funny."

These people are certifiably ill.
at 10:28 AM

I like how your first link is the tribute to Jack.