Do Not Put Dead Monkeys in the Freezer 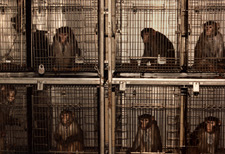 Monkeys at the laboratory,
monkeys doing countless somersaults
in every cage on the row,
monkeys gobbling Purina Monkey Chow
or Fruit Loops with nervous greedy paws,
monkeys pressing faces
through a grille of steel,
monkeys beating the bars
and showing fang,
monkeys and pink skin
where fur once was,
monkeys with numbers and letters
on bare stomachs,
monkeys clamped and injected, monkeys.

I was a lab coat and rubber gloves
hulking between the cages.
I sprayed down the batter of monkeyshit
coating the bars, fed infant formula in a bottle
to creatures with real fingers,
tested digital thermometers greased
in their asses, and carried boxes of monkeys
to the next experiment.
We gathered the Fear Data, keeping score
as a mechanical head
with blinking red bulbs for eyes
and a siren for a voice
scared monkeys who spun in circles,
chattering instructions
from bewildered brains.

I did not ask for explanations,
even when I saw the sign
taped to the refrigerator that read:
Do Not Put dead Monkeys in the Freezer.
I imagined the doctor who ordered the sign,
the moment when the freezer door
swung open on that face,
and his heart muscle chattered like a monkey.

So I understood
when a monkey leapt from the cage
and bit my thumb through the rubber glove,
leaving a dollop of blood that gleamed
like icing on a cookie.
And I understood when one day, the doctors gone,
a monkey outside the bell curve of the Fear Data
shrieked in revolt, charging
the red-eyed mechanical head
as all the lab coats cheered.

From: Imagine the Angels of Bread. W.W. Norton. 1996.
Reprinted here with the author's permission.

Martín Espada teaches English at the University of Massachusetts Amherst. He has been called the Pablo Neruda of North American authors. He was a lab worker in the UW monkey labs in 1979-80 or 1980-81.