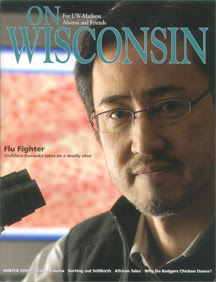 Based on the cover story from the Winter 2006 On Wisconsin, the UW-Madison alumni magazine, it appears that Dr. Yoshihiro Kawaoka walks on water.

And that, the story goes, is why the university has committed to building him a (currently estimated) $11.4 million dollar BSL-3-Ag lab, with saftey features just a sneeze less rigorous than those found in a BSL-4 lab like the one the UW is trying to establish in the bucolic Town of Dunn, just a few minutes from Madison. More on that here and here.

What most excites Kawaoka -- and what most complicates the job's completion -- is that the building will include a so-called BSL-3-Ag lab, a highly secure space designed to allow researchers to work safely on life-threatening biological agents. BSL-3-Ag, which stands for Biosafety level 3- Agriculture, denotes the second-highest level on the federal government's biosafety regulations and is prescribed for work with viruses that would pose health threats if they escaped the lab. Since no facility of this standard currently exists on campus, Kawaoka has had to ship some of his research projects -- including one to build and evaluate a replica of the 1918 Spanish flu virus -- to a lab in Canada. (p 26.)

Hum? If this is true, would someone please explain to me the implication of the minutes taken during closed session of the November 2, 2005, University of Wisconsin-Madison Institutional Biosafety Committee (IBC). And the minutes of the following meeting.

One of the safeguards mentioned in the On Wisconsin article ["Flight Lessons." Michelle Penn. On Wisconsin. Winter 2006. pp 20-27.] is that:

Every bit of air circulating inside will be filtered and purified. Every drop of water used will be boiled and cooled before entering the sewer system.

But the minutes of the IBC make it clear that the Kawaoka lab is hosed down and the water just goes down the drain. One of the improvements required by the IBC prior to approving his use of the reconstructed 1918 flu virus was that the lab had to "treat the drain regularly with disinfectant..." That's comforting.

1. If what Kawaoka is doing in his lab is safe, why does he need a new lab?

2. If the new lab is needed in order to make his research safe, why is he being allowed to use the Spanish flu and the Ebola virues in his current lab already?

3. Will one of the IBC members or someone from Kawaoka's lab write to On Wisconsin to clarify these seeming and presumably important contradictions?

One of the university's arguments for encouraging Homeland Security to build its new BSL-4 lab in the Town of Dunn is that the facility will be of use to UW researchers. Having these two labs in such close proximity is likely to increase the liklihood of conveying very dangerous disease agents back and forth, increasing the liklihood of possible public exposure due to an unanticipated accident.

The bottom line for wanting to keep Kawaoka in Madison is money. He brings in well-funded federal grants and has a proven potential for producing patentable products.

Considering that 48% of this gets deposited directly into the university's general fund, it's clear that Kawaoka is a cash-Tajima-ushi.