In Vivisectors Love Animals - Part One and Part Deux, I reported on the nature of the event that led to me picking up the little booklet -- "Love Animals? Support Animal Research" -- from the Foundation for Biomedical Research, paid for by 176 companies including a number taxpayer-funded laboratories and institutions.

In Vivisectors Love Animals - Part 3A, I began looking at how FBR and the little booklet's 176 co-sponsors attempt to bamboozle the public. Nowhere in the little booklet is there an honest representation of what is done to the animals used in the labs.

Last year, animal rights activists gained entry to the buildings and videoed what they saw. You can read an in-depth article about their efforts and the use of beagles in research here, it includes numerous pictures and video clips.

Here is an image from "Love Animals" (the middle one, as if that needs saying), and two from inside Ridglan:

All the images in the little booklet are intended to deceive the public; there isn't any other rational explanation for using pictures of seemingly happy and well-cared for animals rather than pictures actually illustrative of what is happening in the labs and in the breeding sheds.

The claims, in the text accompanying the happy beagles, are equally skewed and misleading. The entire book is clearly meant to mislead readers.

FBR and the little booklet's 176 co-sponsors write: "The number of dogs involved in research is small (less than 1/2 percent)." Presumably, they mean 1/2 percent of all animals used, but it is certainly an even smaller percentage if all the invertebrates, fish, mice, and rats are included. But so what? Why does the number of animals being hurt matter? Further more, the largest consumer of dogs are the product testing labs like Covance in Madison, which reported consuming 4,297 dogs in 2016.

FBR and the little booklet's 176 co-sponsors pose the question, "But can't you just use rats and mice?" They say "No, not really. The path from concept to cure is complicated." They make the tired claim that researchers begin with cell cultures, tissue samples, and computers and then must add animal models to their study. They say, "Most start with mice and rats. When they get positive results, they advance to an animal model that more closely resembles humans. That's where dogs usually come in."

But that is pretty much gibberish, a commonly told story told to quell alarm and anger. Reality is much different.

A recent case in point is the outbreak of birth defects associated with the Zika virus. On February 1, 2016, the World Health Organization declared that the association between Zika and the cluster of birth defects in Brazil was a public health emergency.

Within a few months of that news, vivisectors who had been (and are) infecting monkeys with an AIDS-like virus began infecting pregnant monkeys with the Zika virus. There was no gradual build-up to using monkeys, they simply went right to them. This is a common pattern. In the 1950s, scientists injected human tissue from people with Kuru into the brains of two chimpanzees to see whether they would become ill; they did.

Having looked for about 20 years at the research conducted by vivisectors around the county, it has become quite clear to me that the NIH-funded scientists are not involved in some sequential series of steps as is claimed in "Love Animals." Those whose work I've followed and examined have done the same sort of experiments on the same species for decades; most of the animal experiments taxpayers are forced to pay for is basic science that rarely -- essentially never -- gets translated into clinical care.

FBR and the little booklet's 176 co-sponsors also make the crazy claim that dogs are used because humans and dogs share 4 out of 5 genes. That's sort of true, but its like saying that because two concertos use many of the same musical notes that we will learn the melody line of one from hearing the other. Here's an interesting resource on comparative genomes.

And then, there's this caption and image: 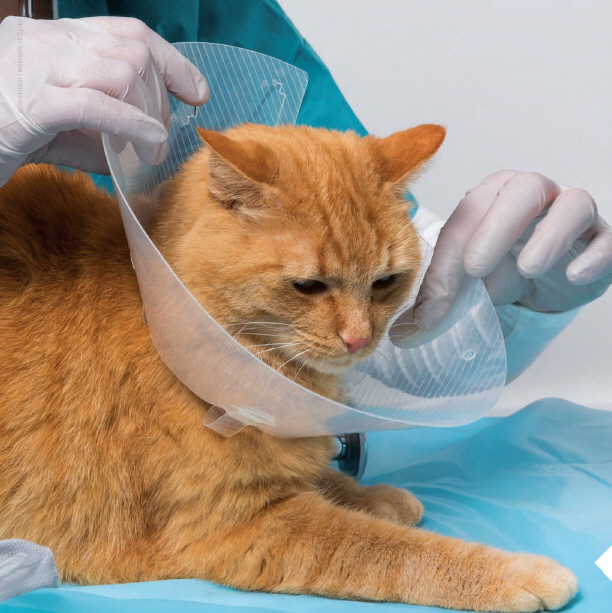 I suggested previously that FBR et al's claim concerning dogs and muscular dystrophy was probably motivated by Peta's campaign to stop Texas A&M's hideously cruel experiments using dogs with an inherited mutation causing them to develop severe symptoms reminiscent of the human disease.  I pointed out that FBR's income is generated by defending institutions and labs that come under fire for the terrible things they do to animals.

I suspect that the allusion to cochlear implants and cats might be a similar case. A few years ago it came to light that a vivisector at UW-Madison was using cats in his research on hearing. and that he had photographed some of the cats who had undergone surgery to implant the cochlear devices and hardware in their brain and screwed to their skulls. His name was Tom Yin. (An aside, he had never used mice, rats, cell cultures, or tissue samples.) You can read about that case here. 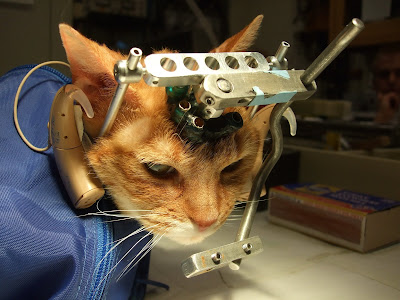 Can you see the difference? FBR and the little booklet's 176 co-sponsors want the public to think about the cat with the cone around his/her neck when they imagine cats being used in research. They too must believe that were the public to learn the truth that their ilk might be driven out of business or at least dramatically constrained compared to what they are allowed to do right now.

The two images, the happy beagles playing together and the cat with the cone around his neck make it abundantly clear that the reality of what is happening in the labs is so terrible that those associated with the industry will do everything they can to keep the reality hidden from the public. And not just hidden; they aim to deceive. There isn't an easy alternative explanation for publishing the little booklet.