In Vivisectors Love Animals - Part One and Part Deux, I reported on the nature of the event that led to me picking up the little booklet -- "Love Animals? Support Animal Research" -- from the Foundation for Biomedical Research, paid for by 176 companies including a number taxpayer-funded laboratories and institutions.

In Vivisectors Love Animals - Part 3A, I began looking at how FBR and the little booklet's 176 co-sponsors attempt to bamboozle the public. Nowhere in the little booklet is there an honest representation of what is done to the animals used in the labs. The pictures they chose to use are evidence that they believe the public would be disturbed and would not be supportive if they knew the truth. In this regard, FBR and the 176 co-sponsors have chosen to ignore the reasons people are opposed to what they do to animals. "Love Animals?" is proof-positive that the industry thinks they need to mislead the public. They're right.

According to "Love Animals?", "Lab people ♥ their lab animals." Yes sir, love, love, love. As proof they have this picture: 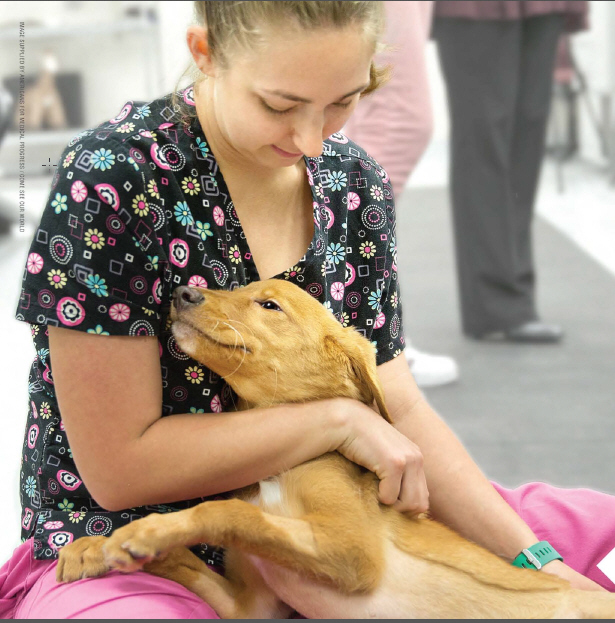 The image is from Americans for Medical Progress (AMP; see the SourceWatch profile) on a website they call, "Come See Our World," which is just more hornswoggle. But they did reveal that the dog in the picture is named Peanut, and is being used to study Duchenne muscular dystrophy, and that caught my eye.

Golden retriever muscular dystrophy (GRMD) is a progressive, fatal disease characterized by degeneration of skeletal and cardiac muscle, but some muscles paradoxically undergo hypertrophy. Signs of disease show soon after birth because affected pups are often ineffectual sucklers. Although all Golden retriever muscular dystrophy (GRMD) dogs feature a total absence of dystrophin, phenotypic variability is frequently observed. Some severely-affected pups survive only a few days, while other dogs that survive for years with mild clinical involvement have also been documented.

Laboratories maintain colonies of these sick dogs; they breed them knowing that they will suffer until they die or are killed. This is another dog, Jelly, who was also used in these experiments: 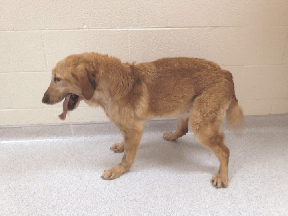 It makes a sort of sick sense that AMP and FBR would use a photo of a dog being used in muscular dystrophy experiments because Texas A&M University has been under fire for breeding these sick dogs, and AMP and FBR's reputation among vivisectors is enhanced when they defend a lab and do what they can to fool the public.  It isn't a coincidence that they chose a picture of cute puppy being held on someone's lap; their goal is to mislead people so that the labs' income steams are not negatively affected. Accompanying the misleading picture of the puppy is misleading text. They say: 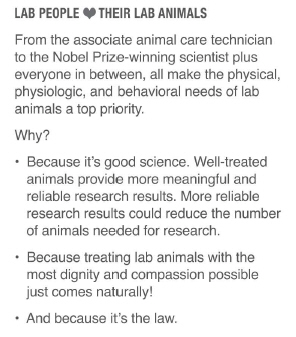 And they treat them "with the utmost dignity and compassion"? Like the Nazi's did the Jews.

And that bit about the law? The industry must be very happy with the changes the Trump administration is implementing.

And then, FBR and the little booklet's 176 co-sponsors assert that the U.S. research regulations are "among the strictest on the planet." Well, maybe. It's hard to imagine that a tumor-burdened rat in a plastic box could differentiate an American lab with, say, a Chinese lab. And according to a map near the bottom of this page, only New Zealand, India, and Europe have banned cosmetic testing. And given what is allowed to be done to animals in American labs, the possibility that American laws are among the strictest speaks volumes about the world-wide plight of animals being used in the name of money and science.

FBR and the little booklet's 176 co-sponsors point to the fact that some institutions are required to have an Institutional Animal Care and Use Committee; "Love Animals?" doesn't clarify which labs have to have oversight committees. A product testing lab that uses only mice, rats, fish, and/or invertebrate animals does not have to have such a committee. A lab involved only in agricultural research doesn't either.

But every lab using Animal Welfare Act-covered species or receiving federal funding does. But sadly, these committees are not much more than rubber stamps. It is telling that in spite of institutions' violations of the Animal Welfare Act and research that has pointed to the weaknesses of these committees, that those within the industry have never cared enough about the problems to look into them; or if they have, they've kept the results a secret.

The simple fact that these committees are comprised of people whose own projects will be subject to inspection by the researchers they are evaluating has made the system ineffective at best, and in practice, little more than a rubber stamp.

Interestingly, the two-page spread that claims the U.S. has strict laws, features this image supplied by the Jackson Laboratory, of mice, captioned with the observation that there are more than 9,000 strains of mice available to the vivisectors. Here's the image:

Someone reading the little booklet would assume that those mice are protected by the laws being touted in the text, but they aren't. Purpose-bred mice, like those in the image, are not covered by the Animal Welfare Act. They are nominally covered by the Public Health Service (PHS) Policy, but that policy is little more than a mirage.

USDA inspectors make annual visits to labs and institutions and make spot checks to see whether the vivisectors are complying with the Animal Welfare Act. When they find a violation, they tell them to do better. About the only real result occasional embarrassment if the public learns that the university down the street isn't too concerned about the animals it hurts and kills. Monetary fines are exceedingly rare and almost always paltry. But as weak and hollow as enforcement of the Animal Welfare Act has become, the Public Health Service (PHS) Policy makes it look like a police state.

Compliance with the PHS is only promised. Institutions need only promise in writing that they will follow a set of very weak policies. There are only rare and very occasional inspections to check that the policies are being followed, and those occur only when some issue has become too big to sweep under the rug. The PHS requires only that an institution promises to follow the recommendations in a small book called the Guide for the Care and Use of  Laboratory Animals (the Guide.) And even after long-running serious violations have been discovered, action is rarely taken. For more the Guide this see my essay: "The New Watered-Down Version of Oversight of U.S. Government-Funded Experimentation on Animals,"(7-26-12).

Back when the Guide said that labs had to obey state laws, the University of Wisconsin, Madison was violating them regularly, and thus violating the Guide. You can read more about the case that brought these criminal acts to light here. [The university succeeded in getting the law changed to exempt them and did so in a way that made public comment impossible. They were loath to have the public engage in discussion about their use of animals.]

The image of mice was misleading. First, this is the way mice are commonly stored in a lab: 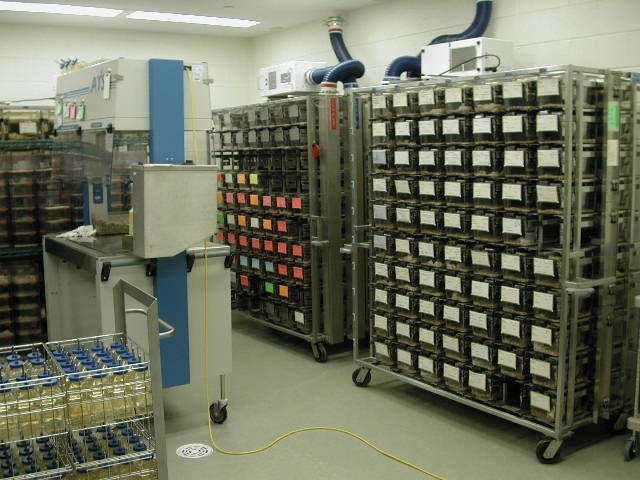 Second, an image of seemingly healthy mice is altogether misleading. The fact that FBR and the little booklet's 176 co-sponsors chose not to include images like these: 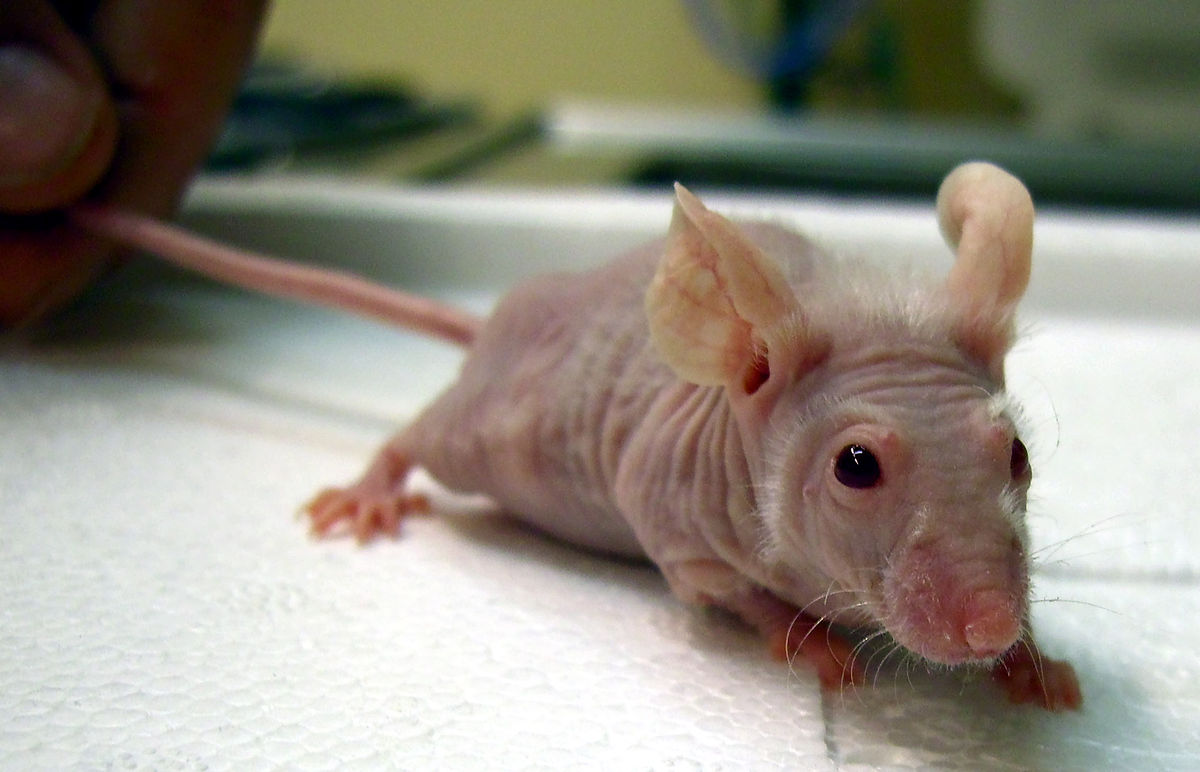 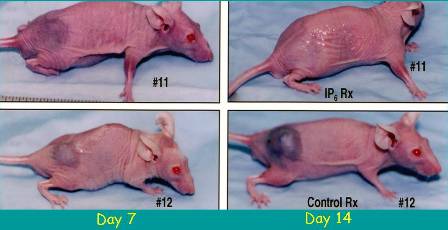 reinforces the my impression that FBR and the little booklet's 176 co-sponsors do not want to have a frank public discussion about using animals as mere tools.Why wouldn't they? The reason is neither complex nor nuanced; the simple answer is money.