In Vivisectors Love Animals - Part One and Part Deux, I reported on the nature of the event that led to me picking up the little booklet -- "Love Animals? Support Animal Research" -- from the Foundation for Biomedical Research paid for by 176 companies including a number taxpayer-funded laboratories and institutions.

I think it reasonable to assume that all 176 of the sponsors and Temple Grandin, who is featured in "Love Animals", want the readers -- the general public -- to believe that the information in the little book is accurate and forthcoming. They must know it isn't, but want the public to believe it is.

The pages aren't numbered, but about 8 pages in, there a 2-page spread showing a closed to door and caption: "To see what's going on in America's research institutions, turn the page."  And when one does, the lying shifts into hyper-drive. There is this photograph from the Oregon National Primate Research Center: 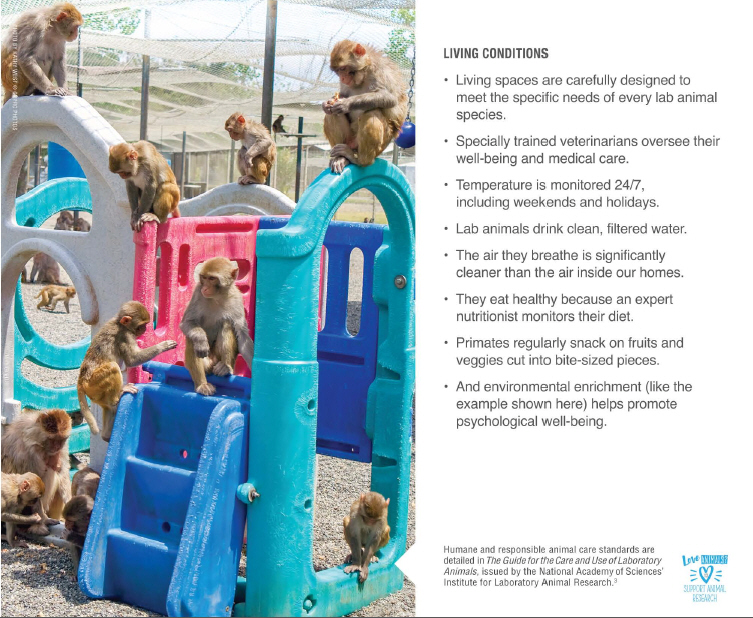 The caption may be hard to read. Here it is again: 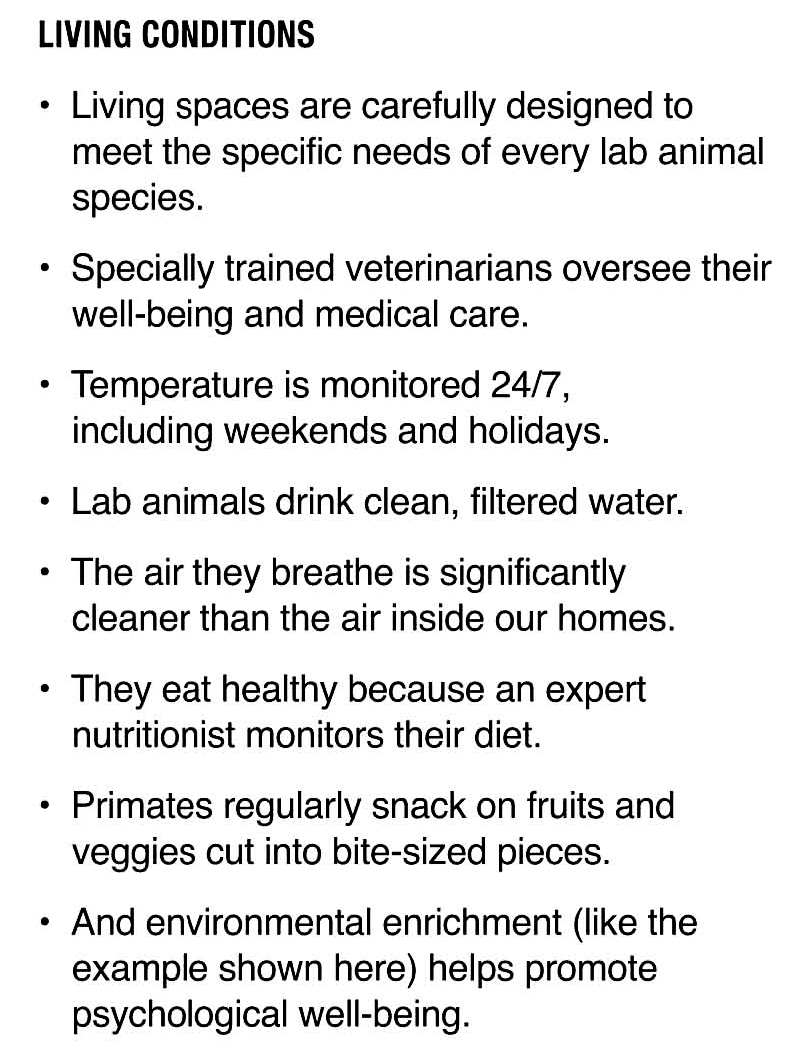 "Living spaces are carefully designed to meet the specific needs of every laboratory species."


The law requires the Secretary of Agriculture to issue "standards, rules, regulations" regarding the humane care and use of animals which have to include minimum requirements concerning "handling, housing, feeding, watering, sanitation, ventilation, shelter from extremes of weather and temperatures, adequate veterinary care, and separation by species where the Secretary finds necessary for humane handling, care, or treatment of animals."

The law requires that dogs have the opportunity to exercise and that primates' environments promote their psychological well-being. The law also requires researchers to consider alternatives to procedures likely to cause pain or distress, and that steps be taken to limit and ameliorate the pain and distress when alternatives are not available or used. In practice, these requirements are weakly adhered to and the stipulated minimums are de facto standards. For instance,

My dog Micky is about 22 inches long. The law says that a dog his size would have to be provided an opportunity for exercise only if the cage he was in was smaller than about 10 1/2 square feet. In other words, as long as the cage was just over three feet by three feet (3.2 ft on a side), a laboratory or university would not be required to ever provide him with more space. Micky has a large backyard and goes on two long walks around the neighborhood everyday. Sometimes we go to a dog park. He loves chasing a tennis ball. He has the run of the house. Keeping him in such a small space would be inhumane. It would be cruel. Worse, the "acceptable" minimum space for him would be a mere 28 inches on a side. As long as he was given some opportunity to be in a larger space for an unspecified period of time, to be determined by the attending veterinarian, he could be kept forever in such a tight space. Keeping Micky in these conditions would meet the legal requirement of a lab having to provide an opportunity to exercise. (From "We All Operate in the Same Way." p 280.)


Mice and rats and other rodents are kept in small plastic boxes. Birds can't fly. More about "Love Animals?" absurd claim below.

Consider this: Doctors complete a 4-year undergraduate degree program, spend 4 years in medical school, and then complete 3-7 years of residency training before they are eligible for medical licensing. Veterinarians complete a 4-year undergraduate program and a four-year veterinary medical degree program. Doctors learn to treat one species. At a vet school like the University of Wisconsin's, students learn to treat dogs, cats, cows, and horses. The curriculum is focused on animals used in agriculture and dogs and cats. Lab animal vets commonly spend 2-3 years of residency training and may be called on to treat many different species.

Additionally, they are sometimes directly involved in using the animals in their care, much like some of the Nazi doctors who worked in the death camps and experimented on the prisoners.  The attending veterinarian at the Wisconsin National Primate Center, Buddy Capuano for instance, oversees the care of thousands of monkeys and co-authors papers on their illnesses after being intentionally infected with various viruses. You can review some of his publications on PubMed. The animals' well-being is a secondary concern for many lab animal vets.

"Temperature is monitored 24/7, including weekends and holidays."

In the many sets of laboratory oversight committee meeting minutes I've reviewed, deaths from overheating as a result of faulty cooling have not been uncommon. The minutes have reported on animals left in overheated transport vehicles, animals dying of thirst from clogged or broken watering systems, animals gnawing on hoses left on the tops of cages, and on and on. The labs are supposed t monitor the animals closely, but in practice entire roomfuls of animals are sometimes overlooked. Animals in dire situations are sometimes left overnight without care. I learned of these events from the oversight committee meeting minutes and USDA inspection reports, back when the USDA was still sort of enforcing the Animal Care Act.

In some cases, the animals are given very little water in order to keep them thirsty. Thirst is used to motivate them to perform in ways the vivisector desires. In some cases, the water is laced with any of numerous chemicals or drugs. USDA inspectors have found animals having to drink stagnant water; they have found animals having to wade through mud and scum.

"The air they breath is significantly cleaner than the air inside our homes."

This is probably true in some cases. But, many animals are caged outdoors, even in urban settings near busy streets. Also, some animals are used in experiments that force them in breath noxious and harmful fumes and gasses. A paper from vivisectors at the University of Colorado published in 2018, reported on the effects to rats forced to breath in chlorine gas. They wrote, "Massive chlorine inhalation caused severe acute respiratory failure, hypoxemia, decreased cardiac output, neuromuscular abnormalities (ataxia and hypotonia), and seizures resulting in early death." And the knew it would.

"They eat healthy because an expert nutritionist monitors their diet."

Like the previous assertion, this is probably true that in in some cases, animals in labs are receiving adequately nutritious food. The notion that "expert nutritionists" are involved is simple blather. In fact, labs to a terrible job meeting the dietary needs of many animals, even when diet and nutrition are the focus of the research.

The most straightforward example I know of is the Wisconsin National Research Primate Center's twenty-five years-long study on caloric restriction using monkeys. They reported that the monkeys in the control group were dying younger than the monkeys in the experimental group who received less food. (They claimed, based on that data, that reducing one's caloric intake might make one live longer.)

It turned out that the Wisconsin monkeys were being fed a diet very high in processed sugar. The monkeys in the control group, allowed to eat all the wanted, were morbidly obese, as the picture below shows. 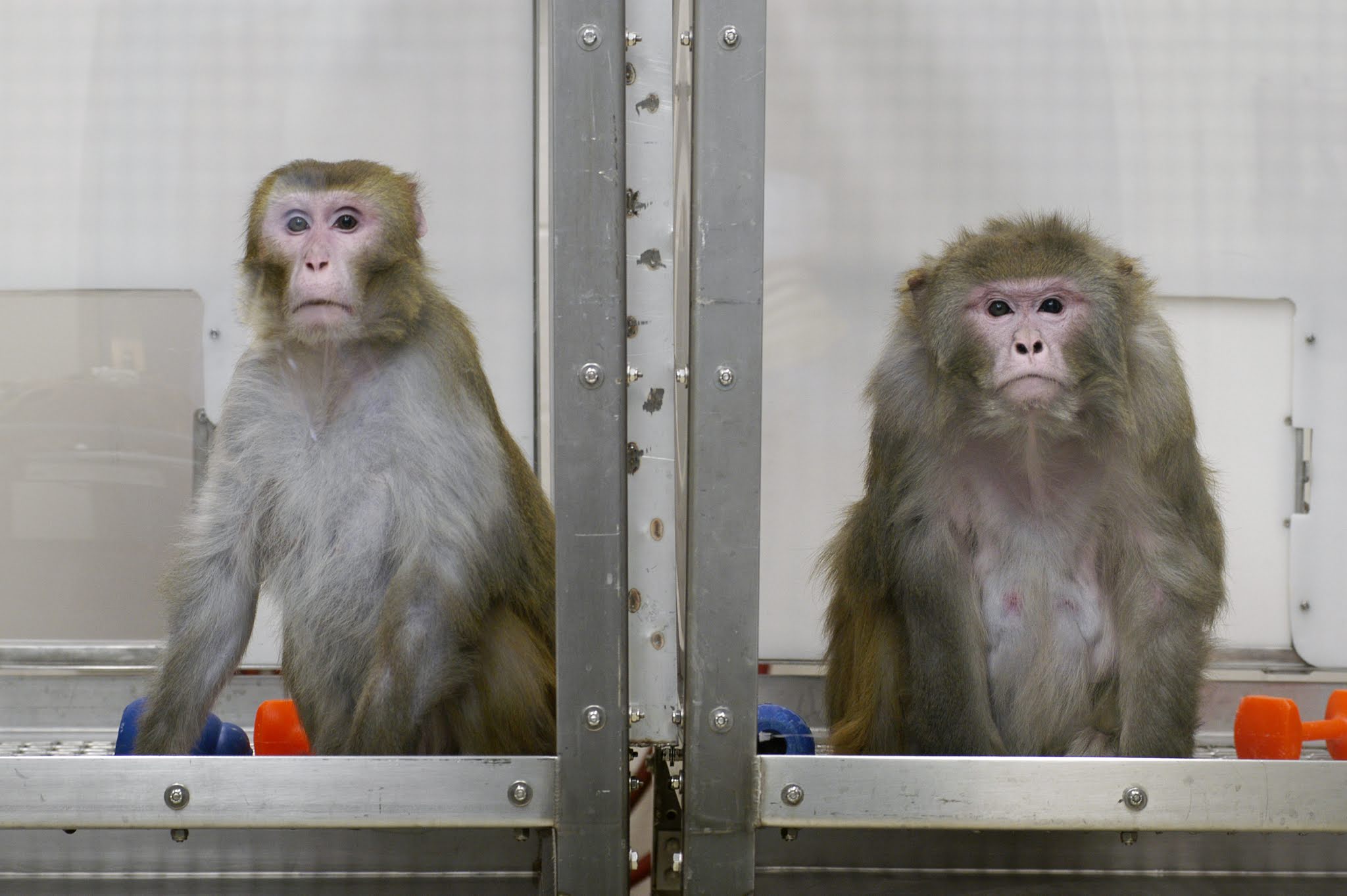 The scientists involved in this long running project were squarely focused on diet. They were, arguably, just the sort of experts being referred to in "Love Animals?" Of course, the authors of the little booklet were simply saying whatever they thought might quell the public's concerns. Truth was obviously not their goal.

How lucky they are! In fact, efforts are made to make such food items less than easy to eat. A universal problem in the monkey labs is self-injury. The monkeys in the labs are kept in profoundly small barren cages. These animals are smart and in the wild are confronted with complex problems that they must think about to solve.

Like human prisoners in solitary confinement, the common laboratory conditions cause many of them to harm themselves, to develop repetitive behaviors to cope with the mind-numbing dullness and constant threat from humans. They are trapped, there is no escape, and as you or I would, they try to cope. The labs are forced to deal with their self-inflicted wounds and related chronic diarrhea. To reduce some of these problems, the labs have developed ways to take the monkeys' minds off their situation. Many of these involve making prized food items hard to get forcing the monkeys to have to work to get them. FBR's claim is misleading and hides the hard truth.

Of all the claims on their list, this is the most misleading and absurd. It is the most dishonest. The fact that NIH National Primate Research Centers help finance the production and distribution of such misleading propaganda underscores their dishonesty and desire to fool the public. The people who hurt these animals are lying about what they do to them and how they are treated. Look again at the photo they are using from the Oregon National Primate Research Center. This is a photo of one of their outdoor breeding colonies. Compare the proffered Ptempkin village with the reality: 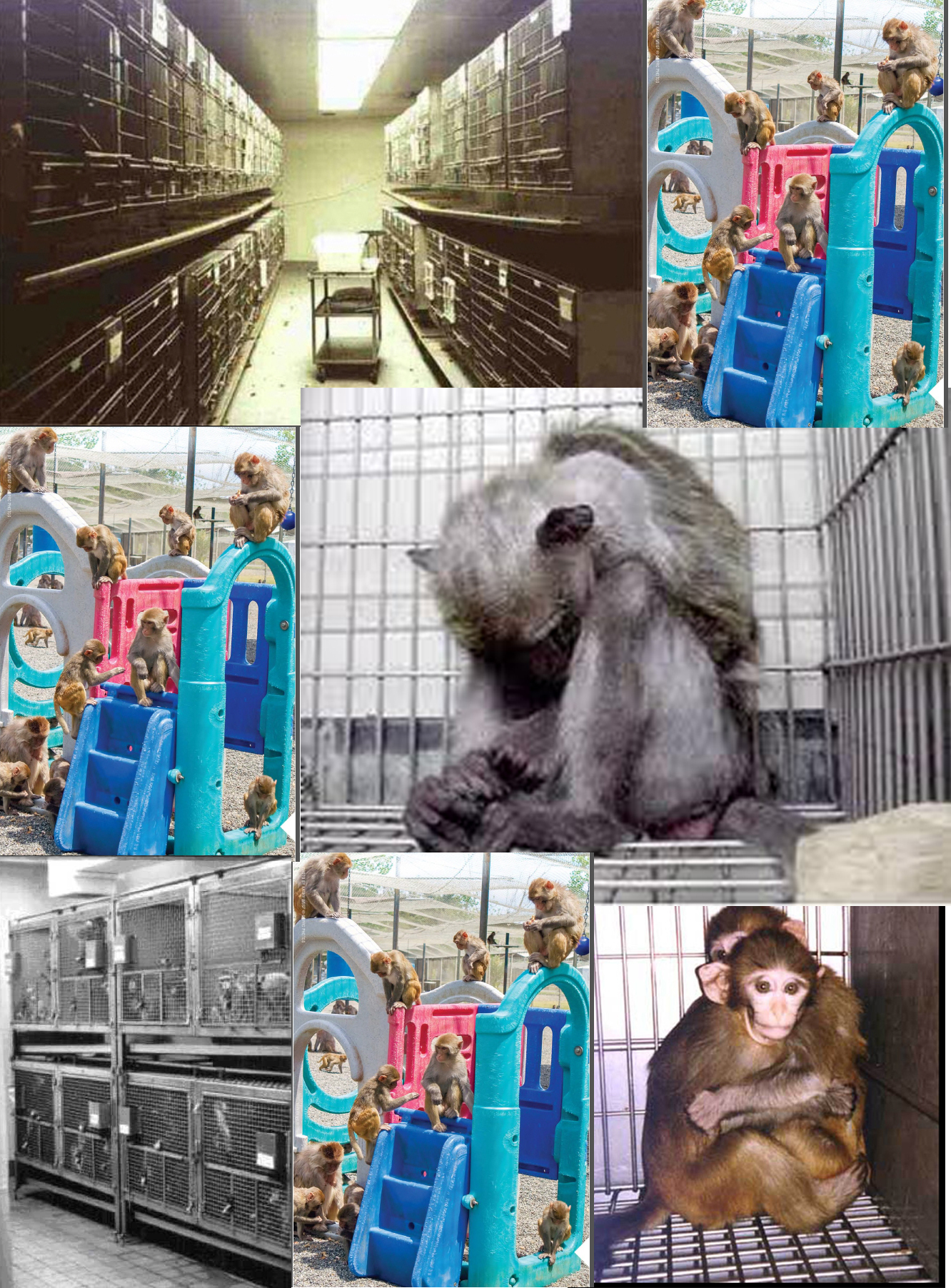 Monkeys are harvested, just like the Morlocks harvested the Eloi in H.G. Well's The Time Machine. Claiming that an outdoor breeding colony is representative of how these animals are treated is the epitome of dishonesty and hoodwinking. It shows in spades that the people who work in these places, the people who try to fool the public about what goes on in them them, who mislead the public about how the animals are treated, should not and cannot be trusted. They are liars who get rich hurtiing those who are much weaker than themselves.