The Biology of Iron

Yes, sometimes the animals are like us and other times they are different than us. One of my early professors taught me that we can learn as much sometimes from how animals are different from us as they are the same. In many cases, as in the study iron deficiency, my topic area, the biology of iron is the same in a monkey, and a rat, and a human, and one can learn a lot from it. -- Chris Coe, Dane County Supervisors Executive Committee, July 8, 2010. (My emphasis.)

I mentioned in my last post that Dr. Coe's assertion concerning the biology of iron was worth looking at a little more closely.

Iron is a nutritional requirement for a number of species, perhaps even most, if not all. This isn't surprising given the fact that iron is a commonly occurring element and that life on earth has been exposed to iron throughout evolutionary time.

But needing and using iron has not led to a common fixed biology of iron, despite Coe's assertion.

His claim is far-reaching and inaccurate. Not only is monkey, rat, and human iron biology different, as would be generally assumed given these species' evolutionary separation, but, as it turns out, even within each "species" there is variability in the biology underpinning iron requirements and metabolism. ["Species" is inaccurate in this context. There are many species of rats and monkeys. Biomedical researchers using animals frequently and routinely interpret results from a small experimental group of animals of the same species with overly broad claims about the entire species or even multiple Families, as in claims about "monkeys" a generic term which encompasses somewhere around 500 species.]

Consider first the biology of iron in rats of the same species but from different strains. 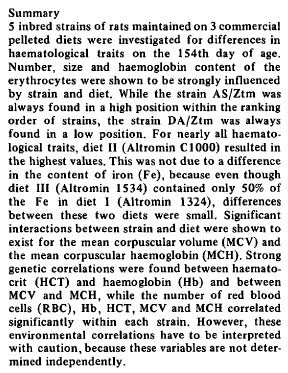 So what about the biology of iron in the approximate 500 monkey species? It is quite variable. But to be fair to Coe, I'm sure he doesn't have an inkling about the iron requirements or the biology of iron in all of these distinct species; he was probably referring to one of the three species most commonly used: rhesus monkeys, long-tailed macaques (aka crab-eating macaques or cynomolgus monkeys), and common marmosets, (or maybe even squirrel monkeys, species he once erroneously prophesied would "play an increasing important role in research." (See Rosenblum LA, Coe CL Handbook of squirrel monkey research. Plenum Press. 1985. vii.)

Marmosets (Callithrix jacchus), [like lemurs], develop hemosiderosis in captivity; it is also believed to be caused by high-Fe diets. When a diet lower in Fe (100 mg·kg-1) was fed, liver Fe was only one-tenth that of animals fed a high-Fe diet (500 mg·kg-1), demonstrating that lowering the Fe content of the monkey diet can reduce the risk of hemosiderosis. (p 100)

In Comparative haematological and plasma chemistry values in purpose-bred squirrel, cynomolgus and rhesus monkeys, Matsuzawa T, Nagai Y. Journal of Comparative Haematology International, 1994, the authors write (in regard to iron-related measures only):

In fact, iron biology even varies between human populations.

For unclear reasons, anemia is more common in American blacks than whites. The authors evaluated anemia prevalence (using World Health Organization criteria) among 19,836 blacks and whites recruited in 2003–2007 for the REasons for Geographic And Racial Differences in Stroke Renal Ancillary study and characterized anemia by 3 anemia-associated conditions (chronic kidney disease, inflammation, and microcytosis). They used multivariable models to assess potential causes of race differences in anemia. Anemia was 3.3-fold more common in blacks than whites, with little attenuation after adjusting for demographic variables, socioeconomic factors, and comorbid conditions. Increasing age, residence in the US southeast, lower income, vascular disease, diabetes, hypertension, and never smoking were associated with anemia. Age, diabetes, and vascular disease were stronger correlates of anemia among whites than blacks (P < 0.05). Among those with anemia, chronic kidney disease was less common among blacks than whites (22% vs. 34%), whereas inflammation (18% vs. 14%) and microcytosis (22% vs. 11%) were more common. In this large, geographically diverse cohort, anemia was 3-fold more common in blacks than whites with different characteristics and correlates. Race differences in anemia prevalence were not explained by the factors studied. Future research into the causes and consequences of anemia in different racial groups is needed.