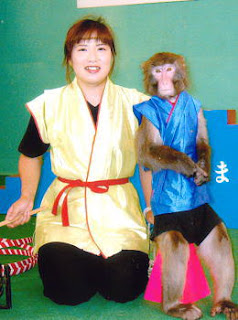 While looking at recently published primate experimentation papers, I happened upon one titled "Textural characteristics of the iliac-femoral trabecular pattern in a bipedally trained Japanese macaque," (2007). A little on-line investigating revealed that there is a tradition -- begun in Japan apparently, but now spread to various countries in southeast Asia -- called sarumawashi, a compound word from Japanese: saru (monkey) and mawashi (trainer), sometimes translated as "monkey turn."

Monkeys used in sarumawashi have been the subject of a handful of scientific papers, the most recent of which was the one I mentioned above (the abstract is copied at the end of this post.) Others have included titles such as:

"Postcranial skeleton of a macaque trained for bipedal standing and walking and implications for functional adaptation," (1995)

"Curvature of the lumbar spine as a consequence of mechanical necessities in Japanese macaques trained for bipedalism," (1988) 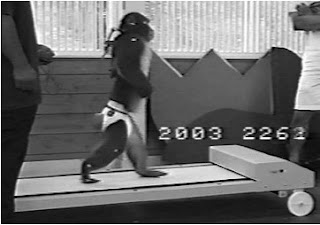 I also found a number of short videos of sarumawashi. There is something about the monkeys' behavior that suggests that they have been "trained" with methods other than love and patience.

The deformities discussed in the papers on forced bipedalism in macaques do not question whether there is any accompanying pain or discomfort. If naturally bipedal primates suffer chronic back pain, I suspect that quadrapeds forced into bipedalism with resultant bone deformities must be more severely afflicted. It seems that human contact with other animals is, more often than not, a nightmare of exploitation. 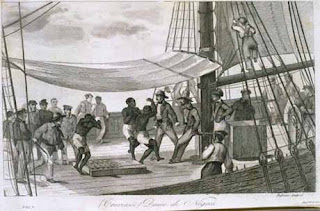 When monsters have you in their power, you have few options other than doing as they command and hoping not to be punished. In such a situation, most of us would do as ordered just to survive. Imagine having throngs of giants laughing and jeering as you were forced to dance for their entertainment.

Previous research has revealed that Japanese macaques (Macaca fuscata) trained in bipedal performance (Saru-mawashi) display a number of functionally related external skeletal changes, as well as some site-specific endostructural cortical and cancellous adaptations. Through radiography assisted by digital image processing, we investigated the trabecular pattern of the ilium and femoral neck of Sansuke, a macaque habitually bipedally trained for 8 years. A set of eight regions of interest on Sansuke were recorded for subtle structural characterization of the cancellous network and compared to a sample of 5 ilia and 23 femurs from 26 adult wild Japanese macaques. The measured variables include trabecular thickness, trabecular bone volume, and degree of anisotropy. As a whole, the site-specific textural characteristics of the cancellous network detected on the ilium and proximal femur of the bipedally trained macaque can be interpreted as functional adaptive responses to more compressive loads dissipated along the axis from the sacro-iliac to the coxo-femoral joint, and back.