There is a big and important difference between being wrong and trying to fool people. Anyone who writes very much about things done in secret is bound to get things wrong every now and then. But knowing the truth and telling people something different is a whole other matter.

When one knows the truth, but tells someone something different, to financially benefit oneself, it is an example of the worse sort of lying. It will come as no shock to my regular readers to learn that a very recent case of this sort of swindle involves the group of self-interested vivisectors who misleadingly call themselves Speaking of Research.

The group wrote on their website something they titled “Open letter: Private workshop on the “necessity” of monkey research does not represent broad public interests or the scientific community.” (Isn’t everything on a public website an “open letter”?)

They were up in arms that Jeffrey Kahn, Director of the Johns Hopkins Berman Institute of Bioethics, had the gall and timidity to convene a workshop centered around the question of using monkeys in biomedical research. How dare he, they complained, since the NIH (forced by concerns from member of Congress) put on a workshop less than a year earlier (“Continued Responsible Oversight of Research with Non-Human Primates”) that came to the (NIH-wanted) conclusion that the use of primates in NIH-funded research was just as it should be.

To understand the fullness of their deceit, you should review what transpired at the NIH “workshop.” It was a sham, a show-trial for those pesky members of Congress.

Speaking made the outlandish claim: “The scientific community has publicly weighed in on the necessity of primate research,” and pointed to hundreds of vivisectors who support the continued use of primates. (Previously, Speaking was all hot and bothered by the change in U.S. policy regarding the use of chimpanzees.) But the “scientific community” has decidedly not weighed in. Moreover, since it is claimed that science per se is morally neutral, opinions held by scientists on moral questions should not have more weight than anyone else’s. Particularly not when the opining scientists have a clear vested interest in the answer to the question. Examples of scientists accepting cash and then providing a wanted scientific opinion for a company or industry are legion.

The claim that the “scientific community” has weighed in is also very misleading. A tiny number, relative to the size of the entire scientific community, have voiced an opinion, and the opinions of those who have, have been cherry-picked by the vivisection community to bolster their claim that without experiments on animals all medical progress will screech to a halt and babies will die.

But nearly all of those who have added their names to the claim that we must keep hurting and killing monkeys are financially vested in the practice or in the practice of hurting and killing other animals. Characterizing this extraordinarily biased constituency as the “scientific community” is either a grandiose delusion or else just simple propaganda, in other words, a lie. Here’s the vivisection community’s spiel which includes a list of the people who signed on in agreement: “Primate research is crucial if we are to find cures for diseases like Parkinson's.” The Guardian, 9-16.

Reading down the list of people who added their names, almost all have clear professional and financial ties to animal experimentation. It’s like saying that the energy production community says that without coal we won’t have electricity and to prove it, here’s a letter saying so signed by coal company executives and miners.

Moreover, Speaking says that the conclusion of the NIH-convened workshop, stacked with those vested in the system, proves that everything is as it should be, but the self-serving nature of the workshop was blatant.

Speaking’s criticism that the Johns Hopkins workshop on the necessity of monkey research did not represent “broad public interests or the scientific community” is ludicrous. Polls show that public opinion is shifting, with a clear majority of women opposed to animal experimentation. Published surveys have shown unequivocally that the general public has significantly more concern over the use of primates than the use of rodents.

It is clear that the Johns Hopkins workshop was much more in tune with broad public interests than the silly and staged NIH workshop, let alone vivisectors’ self-serving endorsement of hurting and killing more monkeys.

In looking at the publications on this topic, I happened across one in Science that reported on the changes in a response that resulted from changes in the words used in the questions asked by pollsters. [How much does the public support animal research? Depends on the question Science 9-14.)] In the U.K., people seem to be more supportive of “animal research” than they are of “animal experimentation.” That begs the question of whether any words can adequately express what is being asked in such polls. It would tell us much more about public opinion if people could get a good idea what they are being asked about. 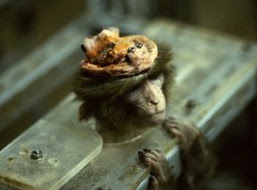 Let’s educate people about what is done to the animals, how they are stored, and how the data from the experiments is used. They should see videos of the animals in the cages and bins, and of the animals being used, and be provided with an accounting of the clinical benefits or lack thereof that resulted, and then asked whether they are comfortable paying for it all. Don’t hold your breath though, such video documentation is vigorously guarded by the vivisection community; the very last thing they want is an informed public.

Speaking’s protestation notwithstanding, it is awesome that ethicists are looking more seriously at our treatment of those less powerful but no less sensitive or deserving than ourselves.