"Furthermore, in two separate complaints filed with the USDA, PETA accused UW-Madison of multiple violations of the Animal Welfare Act. When two comprehensive, multi-day investigations by USDA veterinarians failed to substantiate PETA's accusations, PETA changed its tune and now says they don't care that the study is being conducted responsibly, they still think it's wrong." -- Eric Sandgren. February 16, 2013. In "Eric Sandgren: Cat research, after all the drama." Wisconsin State Journal.

At UW-Madison, we heard about the complaint, and received a copy from a reporter, at 10:00am on a Wednesday, By 1:00pm that afternoon we were able to state verbally to reporters and anyone else who asked that all of PeTA’s statements were unsupported (we could not respond to specific charges until we knew what they were going to be). That’s 3 hours! The detailed written point-by-point response went up on Monday the next week, after careful review by a lot of people, and we may consider posting something like that sooner should we find ourselves in a similar situation. This all worked because we have developed excellent cooperation among University Communications, our animal research program, and faculty and staff regarding animal activist attacks. We also have people willing to respond immediately. I too am amazed that PeTA keeps getting away with this stuff. How do we put them on the defensive? From the fringe group "Speaking of Research" website/blog


Federal inspectors have cleared UW-Madison on charges by the animal rights group PETA that university researchers violated multiple provisions of the federal Animal Welfare Act in their treatment of cats used in a 2008 eye movement study.

"I believed all along that we had remained in compliance," said Eric Sandgren, animal research oversight director at UW-Madison. "I'm comforted that the USDA agrees." " On Campus: UW-Madison cleared by feds in PETA cat research complaint." October 11, 2012. Wisconsin State Journal

Those damn lying animal rights activists; making up things about the University of Wisconsin. How dare they impugn the integrity of the vivisectors at UW-Madison! 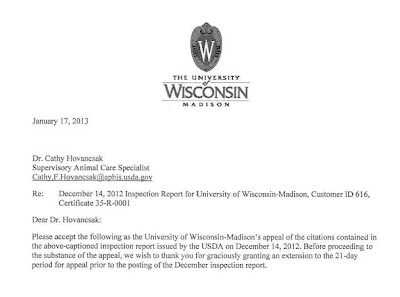 The excerpt above is taken from the University of Wisconsin, Madison's appeal of the USDA citations that resulted from PETA's complaints regarding the care and use of the cats used in Tom Yin's highly invasive and cruel experiments on cats.

This is the opening of their appeal of the results of the USDA inspection report dated December 14, 2012.

Less obvious is that the citations they are appealing are the result of a four day investigation that resulted in the USDA documenting the chronic infections endured by the cats in the Yin lab.

So, all the while Eric Sandgren was telling anyone who would listen that PETA's assertions concerning the cats suffering in the Yin lab were false, he obviously knew otherwise -- because he is the university's head vivisector, the university's animal research public apologist, and he is the director of the university's Research Animal Resource Center. The cats in Tom Yin's labs were and are suffering from chronic infections so severe that some cats' eyes have had to be cut out of their heads.

From December 14, 2012, Sandgren knew that the USDA had indeed found problems that even they  thought deserved citations for violations of the minimal standards set by the Animal Welfare Act.

Come on, say it with me: Eric Sandgren is a paid liar.

Update: A few days after posting this demonstration of the most recent example (among many) of Eric Sandgren's and the university's matter-of-fact lying to the public, I was sent a reminder of Sandgren's appearance on the Jane Velez-Mitchell show with me on February 15, 2013.

The university issued a statement which starts out like this:

The information now being disseminated by People for the Ethical Treatmentof Animals (PETA) and advocates like James Cromwell about research at our university is unsubstantiated and flawed. We have conducted a detailed review of PETA's complaint and can find no evidence to support a single claim the organization makes. Moreover, a lab inspection was conducted by the U.S. Department of Agriculture in response to PETA's complaint and their review found no substance to any of PETA's allegations.

The pictures released by PETA show an animal undergoing surgery to receive cochlear implants. Just like in human surgeries, such procedures are performed under anesthesia and animals receive pain-relieving medication during and after a surgery. After surgery, the cats adapt readily to the implants, which do not cause discomfort or distress. They are healthy and behave normally.

This propaganda is chocked full of lies. In fact, the university was secretly appealing the USDA's citations at the same time they were saying that no violations had been found. There is little about what is being done to the cats in the Tom Yin lab that is "just like" therapeutic surgery on willing humans. In fact, the university knew full well that the cats were not readily adapting to the implants and that the  rate of very serious life-threatening infection from the surgeries was sky-high. Sandgren and the university knew all of this, but said the opposite on a nationally-broadcast television program.

Come on, say it with me again: Eric Sandgren is a paid liar.

Eric Sandgren is a paid sadistic egregious liar, who is right up there with the Monster Josef Mengele. Sometimes I wish the animals would all disappear just so they wouldn't have to suffer because the Human Race is a pathetic excuse to inhabit this planet. I am a strong believer in Karma and until the day I die which will be a long time (because I eat healthy (vegan) I exercise) I will live to see Wisconsin Animal Research Facility close. The public is waking up, and even the people who are deaf, who have animals are appalled and disgusted.