PETA exposes a bit of cruelty at UW-Madison

Note: As I warned earlier, the Yin lab website is no longer accessible to the public. Just as the university blocked informed critics from posting on its Facebook page, it has now censored any public inspection of the Yin lab's website. Funny, in a sad anti-democracy anti-education sort of way.]

Normal people will find the video above a little disturbing.... I don't know the date of the photos, but I'm certain that they come from the Yin lab. Some years ago I stumbled across the Yin Lab webpage and snagged these photos (they seem like a happy crew.) 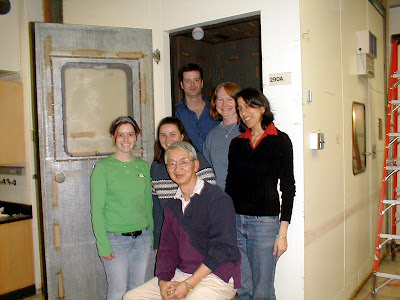 That's Tom Yin in front. The photos were part of a spread on the construction of the lab's new (at the time) sound proof chamber for conducting its experiments on cats. It's mentioned in many of Yin's papers; the tall fellow in the back is his main collaborator -- Daniel J. Tollin, Associate Scientist. Ph.D., 1998, University of Oxford. 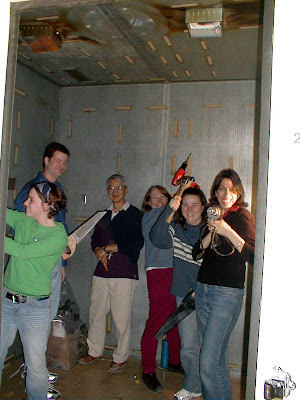 Here are a couple of links to Yin's info at the university. (It might disappear anytime now.)

Check out this video as well before its gone too. It's from the Yin lab. It's much less forthcoming than the PETA video. In the Yin video, it appears that the cat's head is fixed in place. http://www.neurophys.wisc.edu/yin/pinna.asf

As I mentioned above, Yin's main collaborator is Danial J. Tollin, seen here pretending to be a cat before he digs into her brain and ears: 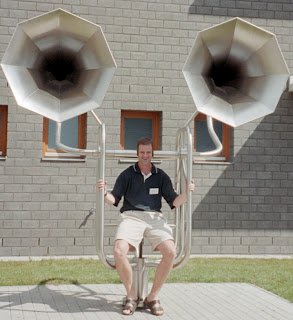 Here's a picture of Tollin's house he kindly added to his university webpage. Proving once again the vivisectors' humility and the austerity and slave wages they endure in their efforts to save humanity: 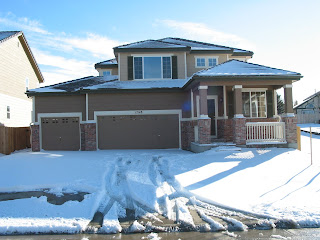 Here's the main PETA page on this. (They don't mention Yin or Tollin by name; it's my understanding that they can't mention who the researchers are. I'm not similarly constrained.)

Here are some links to some of his published papers. Check out the Materials and Methods sections.

Three adult female cats were behaviorally trained to localize sound sources using operant conditioning procedures and food reward. Each cat was surgically fitted with a head post and eye and pinna coils made of fine wire (Cooner Wire, Chatsworth, CA). A detailed description of the surgical and behavioral procedures are given in Populin and Yin (1998a). The magnetic search coil technique was used to monitor eye and pinna position (Fuchs and Robinson 1966) by implanting eye coils around the eye ball and pinna coils subcutaneously behind the pinna as described earlier (Populin and Yin 1998b; Tollin et al. 2009). The eye coils were 18 to 19 mm in diameter, and the pinna coils were 10 mm in diameter. The head was restrained by a head post in these experiments. All procedures used were approved by the University of Wisconsin Animal Use and Care Committee [this is misleading since there are more than one -- guess it's best not to be too specific.] and also complied with the National Institutes of Health [miserably weak] guidelines for animal use.

Cats were food deprived 5–6 d/wk once training began. Body weight was monitored daily and maintained within 15% of pre-experimental weight. Water was provided ad libitum, and the animals were fed without restriction on nontesting days. Once accustomed to the head restraint, cats were trained to make saccades to locations of visual and acoustic stimuli in a dark, anechoic chamber.

Here's the university's tepid response to all this: Statement regarding sound localization research at UW-Madison.

How the F*CK do you people live with yourselves? You have no humanity, none! And, please don't say these experiments are necessary. My hope is that you all manage to be bombarded with fleas and ticks all over your body!

I was there - I worked in Bardeen. I know all about this work. Double Trouble is not, by far, the worst of Yin's work. I've seen far worse than this, on multiple occasions.
Yin also collaborated with Basso. He took over her protocols when she was suspended, allowing her work to continue. Incompetent, and dangerous in his staff's and RARC's opinion, yet veterinarians were prevented from do anything about it. Your tax dollars, hard at work. over 20 years of this nonsense, and not a single, useful result. Not a single 'child' saved. If you cannot be angry at the torture of cats, how about wasting your tax money?

Not the worst, by far, of Yin's handiwork. His own staff complained multiple times to veterinarians and RARC about his incompetence. To top it off, he replaced Basso on her protocols when she was suspended. Thanks to your taxdollars, funding keeps everything going.

15What an absolute POS this guy is, no regard for the sanctity of life what so ever.

What an absolute POS this guy is. No regard for the sanctity of life what so ever.

I think they banned your post from their wall, they banned me too. Anyway, thank you so much for your blog, and let's pray that justice will be served, thanks to brave people like you, chances are it will. My heart and soul break when I think about that poor kitty and all the atrocities she had to endure. I hope they will rot in hell. Thanks again

Yeas, i got banned as well, oh well. I did notice that's Yin's FB has suddenly disappeared, he was searchable on the weekend, now he's vanished. Maybe he was being harassed or something? Weird.

I went home after reading this and gave all my cat's hugs and kisses...I looked at them, I have 6 rescued cat's and told them don't worry I will keep you safe. I wish I could have helped Double Trouble gazed into her eyes and said don't worry I will keep you safe come home with me.......Yin is evil and sadistic and eventually he will have to face what goes around comes around...

You guys have a fundamental lack of understanding about how research works. This research was involved in improving techniques for cochlear implants which can restore hearing for the deaf. Would you rather this be performed on people? Yes, it's unfortunate that some animals have to die. But if animal research was abolished, medical science straight-up WOULD NOT EXIST. There is NO WAY AROUND IT. We would have few or no new drugs or methods for treating patients. Occasionally infections happen, yes. JUST LIKE IN HOSPITALS. Not downplaying the struggle of this cat but there's a little more at stake here. To say that Yin "has not had a single useful result" is a bald-faced lie. Yin has years of research at his back and is one of the most respected researchers of aural aspects of neuroscience. And just because something has not been published does not mean it was not useful. Most research does not produce findings significant or noteworthy enough to be published or lead to a breakthrough, but it does provide the basis for further studies which do. It's not as if we can predict what will turn out to have a significant result and what won't, but obviously the expectation was that it would. This is being painted as "torturing cats for fun," essentially, and it couldn't be further from the truth. There is a rigorous review process for every study using human or animal participants, and it has to be judged by multiple independent sources that the potential benefits outweigh the risks of harm.

In short: grow up. This is not animal makeup testing or some other useless bullshit. Animals die in research so that humans don't have to. That's it, plain and simple. Science and humanity would be completely undermined if animals could not be killed. That is reality. How is it any different than eating meat? In fact, it's more noble than eating meat. It's serving the greater good. Eating meat is killing animals for purely selfish reasons, and yet most of the people I hear squawking about animal research are not vegetarians. What gives? Does a cat's life really have less value than a pig's just because the cat is cuddly?

This is my favorite point: "... just because something has not been published does not mean it was not useful." Other scientists learn about the results via ESP? You must have gone to school at UW Madison.

Ian, you should stop eating animals or advocating for them to be killed.

I don't think Yin tortured cats for fun, though he may have. I think he tortured cats because the money was so good. I think that's the main reason for essentially all experiments on animals.