The University of Wisconsin-Madison promised four years ago to provide public forums to help the public understand its use of animals in it various research programs. You can read about those promises here.

But even the organizers have admitted that the promised forums have not met the goals spelled out by Martin T. Cadwallader, Professor of Geography, Vice Chancellor for Research, and Dean of the Graduate School. Lots of titles, but Mr. Cadwallader should have asked a real teacher or two to help organize the forums because the university staff involved either don't know how to design a meaningful and effective educational activity or else don't really want to talk about the university animal labs, or both.

I've written enough about the "forums" elsewhere. I'm writing here because I have recently gained a little bit more insight into ways that the university tries to control their image. The forums are an example of the university saying one thing and then doing another. The thing they say gets some news exposure, and then the thing they actually do, doesn't. A recent example is the things they said to media about the cats in Tom Yin's lab and PeTA's complaint, and the things they actually did about the problems and about the USDA citations. Their claims were dutifully dispersed by media, but when caught in a series of lies, nothing got reported.

It all comes down to their active propaganda effort. It turns out that you can actually earn an undergraduate degree, a Masters, and a PhD in how to manipulate public perceptions at the university.

Degrees and certificates in "science writing" are offered by a handful of colleges and universities around the country. UW-Madison offers a handful of degree programs in UW-Madison's Department of Life Sciences Communications (LSC).

The LSC webpage explains: "As a department, we further fulfill The Wisconsin Idea through our relationships with UW-Extension, WSUM Madison Student Radio, Wisconsin Public Radio and Wisconsin Public Television."

To begin to see why local media won't report on the problems, lies, cover-ups, and suffering associated with the use of animals at the university, consider the staff at LSC.

It is far too idealistic or naive to imagine that Wisconsin Public Radio or Wisconsin Public Television would ever cover the problems at the university. According to a conversation I had with the NPR Ombudsperson, self-censorship by NPR affiliates associated with universities is a recognized problem that no one has taken the time to address.

In the case of UW-Madison and Wisconsin Public Radio, the reason for the self-censorship could be related to the fact that the Madison station is physically on the UW campus, in a UW building, and that some of the senior staff are university employees. The most obvious example is Larry Meiller, host of the Larry Meiller Show. Mieller is also a Professor, and the Director of Undergraduate Advising and Career Placement, and the Department Chair of UW-Madison's Department of Life Sciences Communications (LSC). You won't ever hear Meiller say something critical of the university's use of animals.

One of his common guests, and his co-host of Calling All Pets, is Patricia B. McConnell, an Adjunct Associate Professor of Zoology at the university. I remember once hearing them on the show laughing together about what was being done to rats in an experiment they were talking about. You can't expect to hear any criticism of the university's use of animals on that show either.

And then there is Tom Still, former associate editor of the Wisconsin State Journal and a currently a regular columnist in the business section. Still is a Lecturer at LSC.

Still is also president of the Wisconsin Technology Council, which has strong ties to the university. Additionally, he serves on the Board of Directors of the very creepy Wisconsin Security Research Consortium (WSRC), a UW sock puppet. Over the years, Still has been a defender of all things harmful to animals that might be economically profitable.

This incestuous intertwining of the university's interests with the programming and reporting in the Wisconsin State Journal and on Wisconsin Public Radio goes a long way to explaining why there isn't much local coverage or discussion of the problems at the university.

But the problem isn't just these obvious conflicts of interest.

UW-Madison's Department of Life Sciences Communications is worth digging into a bit. For instance, the statewide effort to recruit children and turn them into adults who like to kill animals, was apparently designed by staff at LSC:


A new initiative called the Hunters Network of Wisconsin, led by LSC Assistant Professor Bret Shaw, aims to understand how social networking technology may be used to promote hunter recruitment and retention in Wisconsin.....

"The Hunters Network of Wisconsin is targeting people who are interested in hunting but have not been raised in families that hunt,” said Bret Shaw, environmental communication specialist for the University of Wisconsin-Extension and assistant professor of life sciences communication at UW-Madison. “Many people, particularly young people, are heavy users of social networking technologies, and this may be an important way to inform them about hunter education opportunities in their local communities and connect with others who are interested in hunting,” said Shaw. "

It is interesting to read through some of the info at the LSC scimep lab (Science, Media and the Public.)

They explain that the lab is involved in "experimental studies of message processing and public understanding of controversial science, and long-term tracking of media coverage." But as far as I can tell, out of the approximately fifty papers from the lab over the course of its seven years of existence, there hasn't been even one paper concerning the public's perceptions of, or the media's framing, or anything whatsoever, regarding the use of animals in science. This is distinctly odd. The Department of Life Sciences Communications, the department's lab looking at public understanding of controversial science, the matter-of-fact reality that the use of animals is the epitome of controversial science, and yet nary a word. Maybe someone has alerted them to the institutional strategy of keeping the subject hushed up.

It is notable that investigators in a lab that is supposed to be involved in experimental studies and analysis of message processing and public understanding of controversial science aren't looking at the most controversial topics. They aren't looking into the messaging about and the public perception of abortion (When does an embryo begin to feel pain?) or medical testing on animals, or cloning animals, or the use of stem cells from human embryos, or even cloning humans. No, their big investigations and research are focused on the public's perception of nanotechnology. This might seem odd until one realizes that they aren't interested in the topic. They are interested only in how public opinions about controversial areas in science are formed, with the goal, apparently, of being able to manipulate them. 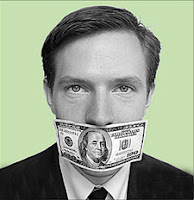 It seems to me that when taken together the unavoidable conflict of interests in media employing UW staff and quasi-staff to report on the university, the university's active encouragement of harming animals, their undeniable financial dependency on harming animals, and their managed propaganda campaign, it all adds up to a likely explanation for why all critical reporting has been dependent on one or two reporters independent enough to report the facts. Now that they have left the field, there is no one left who doesn't have their hand in the university's pocket in one way or another.

Thank you Rick Bogle for this excellent expose of how the University continues unchallenged to operate their animal experiments and other controversial undertakings by obstructing and covering up information about which the public has a right to know. It is depressing to realize how indifferent they are to the wellbeing of the animals - how well organized their coverup is, with money being the imperative bottom line. It makes me ashamed to be an alumnus of what I have always thought was one of our nation's best universities.

To Anonymous, Something good has come out of UW, "You". You have recognized this egregious cruelty, you express your opinion, and you are not embarrassed to speak out against UW. I have heard there are more Alumni that have also spoken out against UW. It is sad they don't care, they have no empathy for any living creature. I'm glad Rick has someone like you supporting him. Take Care