Jennifer Couzin-Frankel: Hello everyone and welcome to Science Live. Today we're going to talk about calorie restriction, primates, and aging.

For years, scientists have known that under certain conditions calorie restriction can dramatically slow aging in many species, like worms and mice. But one big test was whether the intervention also worked in monkeys. Figuring this out takes decades because the animals have naturally long life spans, not unlike people. We now have results from two studies, one suggesting that calorie restriction extends life, the other suggesting it doesn’t. Here to chat with us today are Ricki Colman of the University of Wisconsin, who helped lead one of the studies, and Julie Mattison of the National Institute on Aging, who helped lead the other. We’re delighted you both can join us.

Not too far into the discussion, this exchange took place:


Comment From Brandon Keim: I'm a science reporter for Wired, and have written about both these studies. As time goes on, I find myself less comfortable with the animal ethics involved. I'm not opposed to biomedical testing on animals, but I do believe the suffering we inflict should be minimized, and that it must be outweighed by benefits to humans. As a scientific consideration related to those benefits, when seeking to extrapolate from animal studies to human insights it's important to minimize potentially confounding factors, such as the relationship between psychology and physiology. Given that rhesus monkeys are highly social, relatively intelligent and capable of feeling, why not run calorie restriction studies on monkeys living in social, enriched environments, rather than in long-term isolation? It would be more difficult to ensure equal food consumption, but this doesn't seem insurmountable -- the monkeys could be separated from one another during feeding. And as the monkeys would be far less stressed and less depressed living in social, quasi-natural environments than in isolation, we could ostensibly learn much more from them.

Ricki Colman: Brandon - you have raised a good point. The ethics involved in the research we perform should always be considered. Although the animals in these studies are not housed in natural social groups, they are by no means living in isolation. Unfortunately compromises must be made to perform highly controlled scientific studies. In addition to the social environment within their rooms, all animals are provided with extensive environmental enrichment. Performing these studies on socially living animals would be extremely difficult and could not be done without extensive training prior to study initiation.

1. "The ethics involved in the research we perform should always be considered."

That's true. But there isn't a mechanism in place for doing so, so it doesn't get done very often.  For instance, at a recent animal care and use committee (ACUC) meeting at the University of Wisconsin, Madison -- the same place Coleman works -- there was a discussion about Ned Kalin's (Chair of the Med School psychiatry dept) request for committee approval to maternally deprive 20 male rhesus newborns. There was almost a serious discussion about the ethics surrounding the request but the primate center's attending vet  Buddy Capuano, shot it down. It's pretty clear that such discussions are very rare. Here's a passage from the minutes of the closed session:


... Krugner-Higby said yes and said that she feels the creation of nursery-raised infant non-human primates (NHP) is severe because of what it can do to young animals. Dr. Capuano said this type of research continues to be carried out at other NHP research centers, but acknowledged that this type of research has not occurred at UW-Madison since the 1980s, Dr. Lindstrom asked if this is an established animal model for this work, and asked if separation from the mothers could be half as long as is proposed. Dr. Krugner-Higby said the PI will say that his lab has gone as far as they can within "normal" anxiety range and the research needs to be carried out past that range. Dr. Capuano said that the PI is trying to compare mother-reared animals to nursery-reared animals at a specific developmental stage. He said that he is unsure if the ACUC has the right to tell a PI not to do their research because the research may cause harm. [my emphasis] The ACUC frequently approves protocols that will have adverse effects on animals. Dr. Krugner-Higby said the difference is in other studies of pathogenesis (such as SIV) specific therapeutic or preventative endpoints can be identified and reached, but in these studies endpoints are less clear, noting the behavioral damage to the animals from this type of study is all ready well-known....

When the semi-starvation study was started at UW-Madison in 1989, the amendment to the Animal Welfare Act that mandated labs to provide some environmental enrichment was still relatively new and was being widely resisted and criticized by the industry. Though passed by Congress in 1985, the USDA did not promulgate regulations requiring psychological enrichment until 1991, and did not undertake an industry-wide survey to assess the effects of or compliance with its new regulations for another 5 years. (see: FINAL REPORT ON ENVIRONMENT ENHANCEMENT TO PROMOTE THE PSYCHOLOGICAL WELL-BEING OF NONHUMAN PRIMATES. U. S. Department of Agriculture. Animal and Plant Health Inspection Service. Animal Care. Riverdale, MD. July 15, 1999.)

It's very unlikely that much discussion about the ethics of isolating monkeys and keeping them hungry forever, ever took place among primate vivisectors at UW-Madison in 1989. And to the degree it did, it took place at an institution that was hosting research that led to reports like this one from primate vivisectors at the university the same year the semi-starvation study was begun: A longitudinal study of the effect of differentsocial rearing conditions on cerebrospinal fluid norepinephrine and biogenicamine metabolites in rhesus monkeys. Kraemer GW, Ebert MH, Schmidt DE, McKinney WT. Neuropsychopharmacology. 1989. Here's a quote: "The purpose of this study was to determine whether disruption of early social attachment alters the activity of brain biogenic amine systems in rhesus monkeys (Macaca mulatta). Male rhesus monkey infants were deprived of maternal interaction, peer interaction, or both, during the first 22 months of life."

2. "Although the animals in these studies are not housed in natural social groups, they are by no means living in isolation."

The claim that individually housed monkeys are "by no means living in isolation" is more a euphemism than a statement of fact. This is a common claim whenever the term isolation is used in reference to singly caged monkeys. To a much greater extent than in humans, normal sociobiological behavior of rhesus monkeys involves much physical contact. The forced deprivation of physical contact is likely to produce significant detrimental psychological and physiological effects. Social grooming is an important component of normal macaque behavior. The lack of opportunity to groom and be groomed is isolation if you are a rhesus monkey.

3. "Unfortunately compromises must be made to perform highly controlled scientific studies."

There was no compromise. A compromise would have been necessary if those designing the experiment had disagreed with each other. With regard to giving the monkeys opportunities for direct social contact, this is so unlikely as to be very far-fetched. Colman was posturing, saying we wish we didn't have to be so cruel, because she was speaking in public. Utter nonsense. There was, of course, a real compromise: the monkeys lives were and are being compromised, but that not the sense of the word as Coleman was using it.

4. "In addition to the social environment within their rooms, all animals are provided with extensive environmental enrichment"

But environmental enrichment -- other than social housing -- has not been very successful at ameliorating the various forms of mental illness that are so common in individually caged rhesus monkeys. (See: Stereotypic and self-injurious behavior inrhesus macaques: a survey and retrospective analysis of environment and early experience. Lutz C, Well A, Novak M. Am J Primatol. 2003, and Risk factors and remediation of self-injuriousand self-abuse behavior in rhesus macaques. Rommeck I, Anderson K, Heagerty A, Cameron A, McCowan B. J Appl Anim Welf Sci. 2009.)

The "social environment within their rooms"? What can that mean? Maybe this: 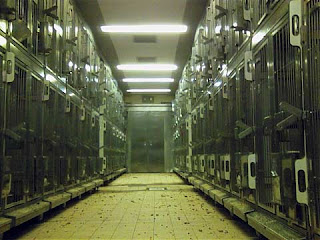 5. "Performing these studies on socially living animals would be extremely difficult and could not be done without extensive training prior to study initiation."

So what? Extensive? What about 30 years of mind-numbing social isolation and gnawing hunger? These people pay much lip service to the things they want the public to believe about them... life saving research, humane care, ethical review, transparency, responsibility, blah, blah, blah...

... “this brings us to an obvious but mostly overlooked weakness in the vivisector's position: that is, his inevitable forfeiture of all claim to have his word believed. It is hardly to be expected that a man who does not hesitate to vivisect for the sake of science will hesitate to lie about it afterwards to protect it from what he deems the ignorant sentimentality of the laity.” (The Doctor's Dilemma, Getting Married, and The Shewing-up of Blanco. George Bernard Shaw. 1911.)