Go ahead, call me a silly wide-eyed optimist, but if enough people knew what was being brewed in Yoshihiro Kawaoka's University of Wisconsin, Madison laboratory, I think they'd raise an eyebrow.

No local media outlet seems disposed to do much reporting on Kawaoka's apparently successful invention of what may well be a virus even more deadly than the 1918 Spanish flu, the most deadly disease yet encountered by humans, which he helped resurrect from extinction. His newest creation is likely to be even more deadly: a very fast-moving, global, species-eliminating, viral epidemic, should his newest invented virus escape from his lab.

No local media outlet seems disposed to mention his Ebola problems, or UW-Madison's history of biocontainment problems, or researchers' biosafety problems, or the university's misleading public statements about potential risks to the public.

University officials work for an institution which skims literally millions of dollars from Kawaoka's NIH-funded research -- they skimmed over $500,000 in 2011 alone. (Universities negotiate what are called "indirect costs" with the NIH, and then take that amount from NIH grants received by grant recipients. UW-Madison is taking about 40%.) The institution is too financially vested to fairly evaluate the risk to its neighbors -- and every other person on the planet -- and defends Kawaoka's very dangerous work by saying that his lab is absolutely, 100% safe and secure. Pay no attention, they say, to this ticking bomb.

If you think I'm being a little too pessimistic about Kawaoka's lab's or the university's inability (or will) to safeguard public health, you just haven't been keeping up-to-date. Here's a somewhat recent timeline of biosafety related matters involving the university and its staff:

In 2005 and into the summer of 2006, researchers at the University of Wisconsin at Madison (UW) made and manipulated copies of the entire Ebola virus genome without proper safety precautions.

Mishandling of Germs on Rise at US Labs
October 3, 2007

Mishandling of Germs on Rise at US Labs
By LARRY MARGASAK

WASHINGTON (AP) — American laboratories handling the world's deadliest germs and toxins have experienced more than 100 accidents and missing shipments since 2003, and the number is increasing as more labs do the work.

The Mother of All Targets
November 3, 2007
H1N1, known colloquially as the 1918 Spanish flu, is the most deadly disease ever encountered.

I am writing with concern regarding the recently completed BSL-3 Agriculture laboratory at the University of Wisconsin, Madison. I understand that the university will be seeking a required CDC inspection of the lab prior to its commission.

As you may know, this lab will be dedicated to research conducted by Dr. Yoshihiro Kawaoka. Recently, it was discovered that Dr. Kawaoka was conducting research with Ebola at the university in a BSL-3 lab and asked for permission from NIH to conduct the research in a BSL-2 lab. NIH responded that the research should be conducted in a BSL-4 lab.

Prior to that, Dr. Kawaoka was apparently conducting research using the 1918 Spanish flu in his Madison lab, and was ordered to stop.

It has come to light that Dr. Kawaoka has continued working with an “altered” Ebola strain in his BSL-2 lab and that neither he nor the University of Wisconsin biosafety committee sought guidance from NIH. (See “UW scientist gains a step on Ebola,” Wisconsin State Journal. 1-22-08. pg 1.)[MSNBC article.]

It seems that there is a general tendency in Dr. Kawaoka’s lab to ease biosafety regulations.

This is worrisome given the deadly nature of the organisms he studies.

I urge the CDC to deny the University of Wisconsin’s request for an inspection of the lab. I urge CDC to find some way to drastically limit the agents that Dr. Kawaoka will be allowed to bring into any lab.

The last thing we need is a 1918 outbreak or the release of a mutated strain of Ebola.

BSL-3s are Hazardous to Your Health
October 12, 2009
This is an addendum to an opinion I had published in the Isthmus on October 8, 2009: “Say no to new UW-Madison germ lab.” 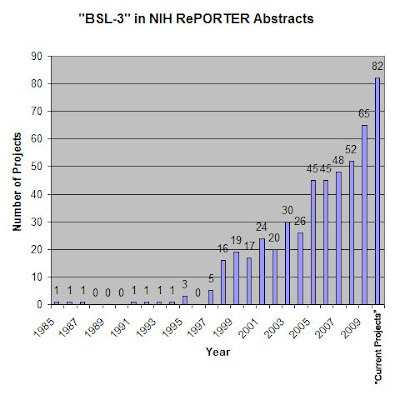 Say what you will, but when others are all coughing up blood, unable to drag the dead from their homes, and are wondering what in the hell happened, I'll be dying too, but at least I'll know more or less what happened and more than a few of those who are to blame.
at 11:05 AM