The Little Angel of St. Louis 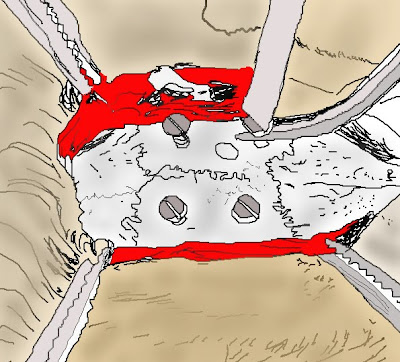 [From an image in Stereotaxic Surgery in the Rat: A Photographic Series. Cooley, R.K., and Vanderwolf, C.H., A.J. Kirby Co. London Canada. 2005.]

It must have been around 2001 when I stumbled on the research publications of Dora Angelaki at Washington University School of Medicine in St. Louis. Angelaki means “little angel” in Modern Greek. The Little Angel of St. Louis designs macabre and torturous devices that might be thought of as diabolical carnival rides for monkeys. They aren’t having any fun of course; the thrill is all hers. Angelaki’s scientific motivation is her desire for a mathematical model of postural awareness that accounts for changes in orientation, acceleration, deceleration, and direction and type of motion a monkey is subjected to.

She has built a couple devices with a monkey restraint chair built into them. She calls one the “sled,” and the other the “motion platform.” She uses stainless steel bolts and dental acrylic to fasten a hard plastic ring to the monkeys’ skulls. Bone is very sensitive, so the post surgical pain from such a procedure might be significant, but she makes no mention of whether such a procedure produces pain or lasting headaches in the monkeys. Would she even know?

Then, she inserts electrodes directly into their brains.

Then she mutilates their inner ears.

Then, she straps a monkey into a restraint chair and attaches another device to the ring already bolted to the monkey’s skull. This devise is then bolted in place to the chair. Now the monkey can’t move his or her head.

The lights are turned off and a small dot of light is projected. The monkey is very thirsty because the Little Angel doesn’t allow them any water before the experiment. In similar experiments going on right now around the United States, monkeys are kept very thirsty throughout the week so that they will perform the little tricks that the monsters have taught them. In most cases, this means that the monkey hasn’t had even a sip of water since the previous day.

The she fires up the ride. The monkey can be turned and spun and shaken. If she keeps his eyes fixed on the light, she gets a drop or two of water. And all the while, the Little Angel's computers are recording eye movement and brain neuron firings.

The papers authored by Angelaki rarely mention a possible health need associated with the experiments she conducts. She does not mention how her work might be useful in combating disease or how the results might offer insight into a human malady. Angelaki is interested in mathematical formulae that might model the vestibuloocular reflex (VOR) and the adaptive modifications in an animal’s system following experimental injury. What might bring someone to the point in their life that they would not only contemplate performing such experiments but also actually carry them out, repetitively? Maybe monsters are born monsters.

Here she explains a specific experimental procedure from 1998:

Seven rhesus monkeys were chronically prepared with skull bolts to restrain the head during experiments and implanted with a dual search coil for three-dimensional eye movement recordings using the magnetic search coil technique. Of these, five animals were used for control responses. In addition, data were also collected from five animals after selective semicircular canals were inactivated by plugging. The lateral canals were plugged in two (LC) animals, the right anterior/left posterior canals were plugged in another two (RALP) animals, and all canals were plugged in the fifth animal…. The efficacy of canal-plugging has been histologically verified…. All surgeries were performed under intubation anesthesia, and animal treatment and handling was in accordance with the National Institutes of Health guidelines.

For experiments, the monkeys were seated in a primate chair with their heads restrained in a position such that the horizontal stereotaxic plane was tilted15° nose-down. In this head position, the vertical semicircular canals were approximately perpendicular and the lateral semicircular canals approximately parallel to the earth-horizontal plane. The monkeys were placed in a primate chair that was secured inside a motorized three-dimensional turntable that could deliver both earth-vertical and -horizontal axis rotations about the yaw, pitch, and roll axes. The turntable was surrounded completely by a light-tight sphere (80 cm radius) covered with a random dot pattern such that eye movements could be studied in complete darkness (when the lights inside the sphere were off). This sphere also could be oscillated independently such that horizontal or vertical (but not torsional) optokinetic optic flow could be generated (with the lights inside the sphere on).

Before experimental sessions, animals were given a small dose of d-amphetamine (1.5 mg orally) to maintain a constant level of alertness. Monkeys were subjected to 2 h of simultaneous vestibular and optokinetic oscillations at each of two frequencies….(1)

She could display shapes and lights on the inside of the sphere that a monkey had been trained to follow or affix his or her gaze on. The sphere was on a track and could be accelerated, decelerated, shook, spun, or moved up and down all at the same time.

She’s still at it.

She published three papers in 2008 detailing her experiments on monkeys:

Frequency-selective coding of translation and tilt in macaque cerebellar nodulus and uvula. Journal of Neuroscience, 2008.

A neural representation of depth from motion parallax in macaque visual cortex. Nature. 2008.

Her publications are good examples of the arcane and highly technical jargon that dresses up reports on animal experimentation in a manner that makes it hard for some readers to interpret, or would find hard to interpret if such papers were ever on the newsstand. They aren’t on the newsstands of course, but that’s another matter that might have something to do with monsters’ common and well-known aversion to daylight.

All of her experiments are more or less the same. She turns monkeys into “scientific” instruments. I have to put scientific into quotations because she’s really just torturing animals. She’s just being true to type; she’s just behaving like any monster that is given access to others and the freedom to do to them as it desires.

Materials and Methods
Subjects and surgery. Physiological experiments were performed in two male rhesus monkeys (Macaca mulatta) weighing 4–6 kg. The animals were chronically implanted with a circular molded, lightweight plastic ring (5 cm in diameter) that was anchored to the skull using titanium inverted T-bolts and dental acrylic… During experiments, the monkey's head was firmly anchored to the apparatus by attaching a custom-fitting collar to the plastic ring. Both monkeys were also implanted with scleral coils for measuring eye movements in a magnetic field... After sufficient recovery, animals were trained using standard operant conditioning to fixate visual targets for fluid reward.

Once the monkeys were sufficiently trained, a recording grid … was fitted inside the ring and … secured to the skull using dental acrylic. The grid was placed in the horizontal plane as close as possible to the surface of the skull. The grid contained staggered rows of holes (spaced 0.8 mm apart) that allowed insertion of microelectrodes vertically into the brain via transdural guide tubes that were passed through a small burr hole in the skull… All animal surgeries and experimental procedures were approved by the Institutional Animal Care and Use Committee at Washington University and were in accordance with National Institutes of Health guidelines.

Motion platform and visual stimuli. Translation of the monkey along any arbitrary axis in 3D space was accomplished using a six degree-of-freedom motion platform. Monkeys sat comfortably in a primate chair mounted on top of the platform and inside the magnetic field coil frame….(2)

In what might be one of her most macabre moments, in a set of experiments she wrote about in 2000, she explained that because she was shaking the monkeys so vigorously, she couldn’t tell with certainty whether the electronics embedded in the monkeys’ brains and eyes were responding to the movements she was measuring or whether the bolts in the monkey’s head weren’t fastened tightly enough to the chair. To assuage her concerns, she cut the monkey’s head off and refastened it to the ride and shook it again:

To investigate the possibility that the head coil did not accurately reflect the movement of the head (e.g., through incomplete coupling or loose head-holder), the following test was performed. Within less than an hour after an animal was euthanized and perfused, the head was put into the superstructure in exactly the same position and was mounted exactly the same way as during experiments….(3)