For first time, monkeys recognize themselves in the mirror, indicating self-awareness
Sept. 29, 2010
by David Tenenbaum

..... a study published today (Sept. 29) by Luis Populin, a professor of anatomy at the University of Wisconsin-Madison, shows that under specific conditions, a rhesus macaque monkey that normally would fail the mark test can still recognize itself in the mirror and perform actions that scientists would expect from animals that are self-aware.

..... Populin, who studies the neural basis of perception and behavior, had placed head implants on two rhesus macaque monkeys, while preparing to study attention deficit disorder. Then Abigail Rajala, an experienced animal technician who is in the university's Neuroscience Training Program, mentioned that one of the monkeys could recognize himself in a small mirror. "I told her the scientific literature says they can't do this," says Populin, "so we decided to do a simple study."

Much to his delight*, it turned out that the graduate student was right.

*Poplin thought to himself, "It's delightful that the monkeys I'm mutilating actually realize what's happening to them. My job's even more fun now!"


Vimeo is sometimes glitchy. You may have to click on the screen or even refresh to get the video to play. [Imagine spending your entire life in a cramped cell like this and completely alone. It's no wonder vivisectors and university administrators are averse to substantive discussions about the ethics of using primates.]

You can read the entire paper here: Rhesus Monkeys (Macaca mulatta) Do Recognize Themselves in the Mirror: Implications for the Evolution of Self-Recognition. be sure to look at the movies and the images.

Here's what Populin writes about one of the movies: "The view of the head implant has been blocked for discretion."

Here's one of the images -- also censored out of concern over the potential consequences of allowing the public to have a feeling for what these isolated monkeys undergo in a university lab: 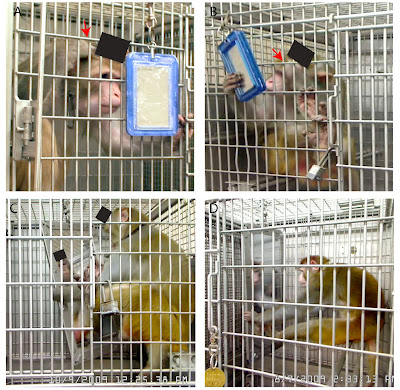 You can glean a little of what Populin's lab does to monkeys (and cats) in this paper, in which he writes about his experiments on Shepard, Glenn, and Conrad: Monkey Sound Localization: Head-Restrained versus Head-Unrestrained Orienting. Luis C. Populin. The Journal of Neuroscience, September 20, 2006.

And: Monkeys See Selves in Mirror, Open a Barrel of Questions
at 10:40 AM