As I mentioned earlier, vivisector have their panties in a bunch over the decision by Oklahoma State University President Burns Hargis not to allow OSU vivisectors to conduct terminal experiments on baboons.

The vivisectors have claimed almost uniformly that the decision was driven by fear of animal rights activists. See for instance the strident mouth-foaming at SpeakingofResearch.

As far as I can tell, the decision didn’t have anything to do with animal rights activism, per se. It clearly had nothing to do with the direct action brand of activism that the vivisectors make a point of claiming that they are opposed to. The project was stopped because the university’s wealthiest, maybe most generous donor, asked them not to kill the baboons. The extreme fringe of the vivisection community spun this into an attack on animal research on a par with flooding Edythe London’s home or blowing up David Jentsch's car.

Anyway, the reason I’m calling attention to the post at SpeakingofResearch is to point out two things: that organization has the support of the extreme fringe of the scientific community and thus, the likely approval of the institutions that skim the tax-payer money that is awarded to their supporters for their cruelty; and that they have made the decision to start posting photographs of the people they are attacking, in this case, OSU president, Burns Hargis. Here’s the image SpeakingofResearch posted: 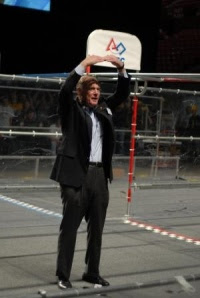 In my opinion, this is a signal of agreement from the government-funded vivisection extremists that putting personal information like pictures of people on line is an acceptable element of the debate and effort to influence people to change their behavior.

It might be argued, as vivisectors do in regard to themselves, that if Hargis feels uncomfortable with his image being posted on an extremist site, then in fact, SpeakingofResearch is guilty of terrorism, by the vivisectors’ own definition of the term.
at 12:12 PM

Rick,
Your argument outlines above is frankly bizarre! The photo is freely available on the web.

According to your argument, a newspaper who writes a negative story about an individual and includes a picture they have taken should be considered carrying out a terrorist action. Clearly a ludicrous argument.

I'm not one to often comment - but this is a very silly argument.

You are confused about the AETA, the law pushed through Congress, largely by the vivisection community. The source of the image in unimportant.

The AETA is clear: Sec. 43. Force, violence, and threats involving animal enterprises: Whoever travels in interstate or foreign commerce, or uses or causes to be used the mail or any facility of interstate or foreign commerce [ie, the Internet] 1) for the purpose of damaging or disrupting an animal enterprise [ie research with animals at OSU]; and (2) in connection with such purpose-- (B) intentionally places a person in reasonable fear of the death of, or serious bodily injury to that person, a member of the immediate family (as defined in section 115) of that person, or a spouse or intimate partner of that person by a course of conduct involving ... acts of ... harassment, or intimidation; ... shall be punished...

If Burns Hargis or a member of his family feels harrassed or intimidated, no matter SpeakingofResearch's actual intent, then SpeakingofResearch is likely committing an act of terrorism as defined by the AETA by posting his picture.

See too, http://www.universityofcalifornia.edu/news/animalresearch/sjmneditorial081108.pdf This is a link concerning UCLAS's proposed local tightening of the AETA. Here's an excerpt: "In an earlier form, which the University of California helped draft, the bill would have banned online posting of addresses, phone numbers and photos of animal researchers..." It doesn't matter where the photo comes from; if the person, according to the AETA, feels threatened by it, then it's terrorism.

I personally find such limitations and broad definitions of terrorism significant attacks on the Constitution, but vivisectors don't have an issue with it so long as the law stiffle's criticism of individual's acts.

The vivisectors involved in Speakingofresearch helped make this bed, now they can lie in it.

Read AETA again. Because I think you need to check where the conditionals lie.

In order to be committing an act of terrorism (according to AETA), Speaking of Research's choice to publish the photo would have to:

a) have the purpose of "damaging or disrupting an animal enterprise"
b) place Hargis or his family in "reasonable fear of the death of, or serious bodily injury" by way of methods including "harassment, or intimidation"

You need BOTH of these to class as terrorism under AETA.
Clearly SR are under no threat of breaking a).As far as b) goes:
1. Do you think Hargis has a reasonable fear of death or bodily injury by the publishing of these photos?
2. Does publishing a already-published photo of a well known figure class as either harassment or intimidation (because if it does newspapers are about to get MANY law suits)?

Feeling threatened by it is not enough (and can you provide ANY evidence that Hargis or his family feel either threatened or intimidated - I much doubt it), you must also show how it puts him in reasonable fear of death or bodily injury.

AETA is phrased carefully in how its conditions work.

You got one thing right: all it would take would be for Hargis or a member of his family to say they feel threatened.