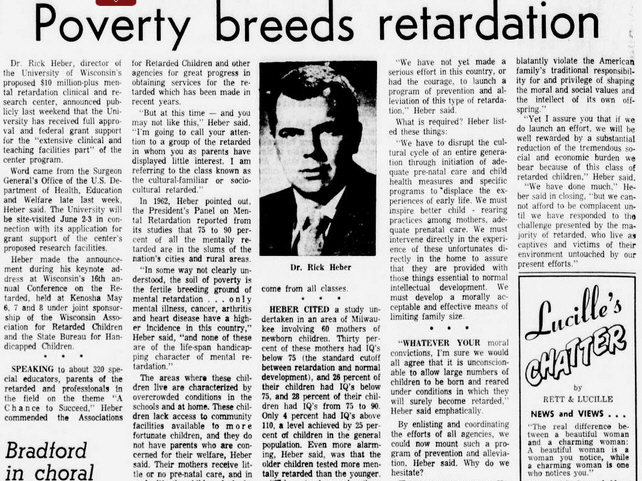 grifter: someone who cheats others out of money. Grifters are also known as chiselers, defrauders, gougers, scammers, swindlers, and flim-flam men. Selling a bridge and starting a Ponzi scheme are things a grifter might do. The difference between a grifter and a thief is a grifter tricks you out of money through lies, while the thief takes it by force. [From vocabulary.com]

UW-Madison is a textbook case of "experts" overlooking obvious nonsense and falsehoods from the charlatans in their midst when the elixirs they are selling are bringing in lots of money -- typically taxpayers' money. The most straightforward and incontrovertible example was Rick Heber. For some reason, the university doesn't remind people about the miracle cures he was selling or about the university's head-over-heals embrace and promotion of his snake oil. I briefly summarized the Heber incident in my book, "We All Operate in the Same Way."

Before continuing, I need to address the question of why Waisman was chosen by the Kennedy Foundation if his research had been largely unnoticed by clinicians working in the PKU arena. If his work did not contribute to the identification or treatment of the condition, if his research was worthless, as I believe the evidence at hand makes clear, why was the university singled out as the Foundation's very first recipient of funding?

There are two likely contributing factors. The first is straightforward: Waisman had been Rosemary's physician at St. Coletta up until his death. Both Rose Kennedy and her daughter Eunice Kennedy Shriver wrote letters of condolence to the school when Waisman died.

The second involves the Kennedy Foundation's push into the area of cognitive disabilities and the subsequent President's Panel on Mental Retardation, both the result of the efforts of Eunice and Sargent Shriver. The Foundation and the Panel were intimately interconnected; two of the Shrivers' three original advisors, Robert E. Cooke and George Tarjan, both medical doctors, were members of the President's Panel. Tarjan was the Panel's vice-chairman. The Panel's chief staff member, sometimes referred to as its Director of Research, was Rick F. Heber, sometimes referred to as F. Rick Heber, a University of Wisconsin professor in the School of Education.

Heber's inclusion in the panel is probably due to his authorship of A Manual on Terminology and Classification in Mental Retardation in 1959. Heber's definition of mental retardation was used and widely accepted at the time the Foundation was determining its possible grant recipients. Eunice Shriver and others mention Heber or conversations with him in the oral histories preserved in the John F. Kennedy Presidential Library and Museum. Heber knew Shriver, Cooke, and Tarjan. He probably knew Waisman; they were both speakers at the 1960 World Conference on Mental Deficiency in London. It seems probable and understandable that he would have used his influence to steer funds to Waisman and his institution regardless of whether or not there was merit in Waisman's experiments on monkeys and rats.

It is not likely that Heber cared one way or the other, but if asked, he probably would have said that Waisman was on the verge of a miraculous cure, whether he believed it or not. When Waisman died, Heber was chosen to succeed him and officiated at the ceremony renaming the facility in Waisman's honor. Rick Heber was the Waisman Center's director from October, 1973, until December, 1980, when he was summarily replaced.

Heber was a crook. I learned about Rick Heber's exploits while trying to find an answer to the question I posed above regarding the reason anyone would have noticed Waisman and given him any money. Those who have written about Heber mention that the scandal was not well-reported outside Madison, or in the science journals. In 1981, he was convicted on multiple counts of diverting institutional funds into his own pocket and was sentenced to three years in federal prison. Wisconsin then sentenced him to an additional four years.

Heber was a charlatan. Heber was the principal investigator on a NIH-funded project that is reported to have paid him $14 million over fifteen years for something called The Milwaukee Project. The prestige he had gained from his work on the Presidential Panel and his subsequent directorship of the Waisman Center must have contributed to the NIH and the university supporting him and overlooking many of the problems associated with his work. Heber said that he had recruited children of black mothers with low IQs for the project. Twenty children received the experimental treatment and twenty did not. The treatment consisted of various educational and enrichment activities. Reports in the popular press said that Heber's methods had resulted in miraculous improvements in IQ; in some cases over 30 points and raising the average IQ of children in impoverished neighborhoods to over 125. His results were incorporated into numerous textbooks and reported as fact. But Heber's results were never reported in a scientific journal, leading some to question whether the project had even taken place.

When the university finally dismissed Heber, they said it was because of his repeated and protracted absences. He is reported to have had a horse breeding farm that took up most of his time. Heber's apparent disregard for those he claimed to be trying to help and his disregard for the possible consequence of his behavior coupled with what appears to have been his very successful efforts to manipulate and influence those around him to benefit himself suggests to me that he was probably a psychopath. It seems reasonable to suppose that it was Rick Heber's manipulations that resulted in the university receiving the Kennedy Foundation grant and subsequent rich support from the NIH.

For his conviction in federal court, Heber served three years at the federal prison in Bastrop, Texas. Fifteen years later, I and thirty or so other people protested for three days at the University of Texas MD Anderson Cancer Center in Bastrop where about 175 chimpanzees were incarcerated; they were innocent and being treated much more poorly than Heber probably was. It is a small world.

Driving to work the other day, I heard a stealth PR spot on Wisconsin Public Radio about a report from the university's HealthEmotions Research Institute that the brains of some boys and girls 11 to 14 years old who played a video game that encouraged empathy were different from the brains of other children who played the game, and that the game might teach some people to have empathy. Sounds like more flim-flam to me. From the university's PR piece:


“If we can’t empathize with another’s difficulty or problem, the motivation for helping will not arise,” says [Richard] Davidson, who headed the research team.

Easy-to-come-by money seems to make some people soft in the head... most people? The core grant from NICHD has been funding the Waisman Center for about fifty years. Harry Weisman died in 1971, that's when Heber was named the director of the center named in his honor. Funding details are incomplete, but over the past 35 or so, it has paid out $39,474,602.

T32MH018931 is one of Davidson's grants. Since 1996, it has paid out about $9.5 million. He currently has 10 active projects with annual yearly combined payments of over $6 million. About a million of that is for his research on meditation. There have been numerous papers and articles generated by the money proving (or at least strongly implying) that meditation is a good thing and, of course, that more money is needed to study it further. One thing they say occasionally, much like the big news about the video game, is that meditation can make one more compassionate. But then, Davidson is a long-time collaborator on a long-running project led by his fiend, whoops, friend, Ned Kalin. They have been making even more money with the claim that what they learn from the brains of young monkeys who were frightened and killed will one day lead to a cure for anxiety and depression.

Hey, if someone tells you they're looking for ways to make people more compassionate, kind, and empathic but is also making money from frightening anxious young monkeys and mutilating their brains, you ought to notice the dichotomy; a red flag ought to go up. A frickin cannon ought to go off when they tell you that they have a personal compassion meditation practice. It's a dark concept indeed. By thinking compassionate things -- trying to feel love for all beings -- one gains something. Maybe you feel better some way. And then you go look at brain scans of young monkeys being frightened.

This is very similar to why some people give to the poor, not for the poor so much, but more to gain merit for themselves. And, seemingly, the dichotomy is so plain and blatant that the people at NICHD giving Davidson such obscene amounts of money, may also think along the same lines as he does.

Davidson's claimed quick fixes seem to be of an absurdity of the same sort as Heber's claims that a little extra tutoring could turn amazing numbers of impoverished inner city kids into near geniuses. But in both cases, the university was and is eager to promote whatever rings the cash register.

There is a distinct pattern of flim-flam from the Waisman Center. I'd be surprised if there isn't good work going on there too, but the leadership, the most senior people, beginning with Waisman and Heber and down to the present, have been less than stellar. The current director is a veterinarian. A veterinarian leading a facility, "Dedicated to the advancement of knowledge about human development, developmental disabilities, and neurodegenerative diseases." [My emphasis, as if you couldn't tell.] Messing's own research is on Alexander disease. Rarediseases.org calls it an "extremely rare" disease. NIH says, "The prevalence of Alexander disease is unknown. About 500 cases have been reported since the disorder was first described in 1949." In 2018, NIH gave Messing more than $1.5 million to study the disease. Wow. A million and a half bucks to study a disease that has only rarely been seen. His work will never be tested. What gig. What a scam.

Messing's predecessor at Waisman was Marsha Mailick, who now is the Vice Chancellor for Research and Graduate Education at the university. I don't know much about her work, but skimming the titles of her papers back to 1977, it looks to me like her work has been entirely clinical in nature, but then, so was Heber's. Replacing a clinician with a veterinarian is a decidedly backward step. The one thing I know she got completely wrong was Waisman's research on PKU or phenylketonuria. It was a sham, based on monkey and rat models that later reviewers dismissed as unimportant and misinterpreted (flim-flam in layman's terms.) That was the area of Waisman's work that got the most promotion from the university, so maybe Mailick was just duped by the universit's PR, like the local press was.