"What would happen if all Americans went vegan?" 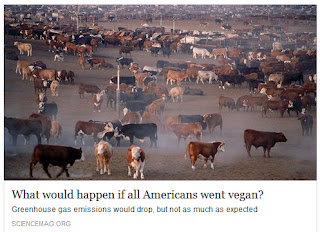 I am responding here only to the article in Science announcing the publication of "Nutritional and greenhouse gas impacts of removing animals from US agriculture" in the Proceedings of the National Academy of Sciences of the United States of America. I've not read the original because it is not yet available to me. Assuming that Science's reporting is accurate, it just goes to show that dominant paradigms and financial interests are overwhelming confounds in the world of normal science. "The authors declare no conflict of interest," says PNAS.

But given the author's affiliations, it seems matter-of-factly otherwise. Robin R. White is an assistant professor in the Department of Animal and Poultry Science, Virginia Tech, Blacksburg, and and Mary Beth Hall is a scientist employed by the US Dairy Forage Research Center, US Department of Agriculture–Agricultural Research Service. Her office is in the Animal Science Building at the University of Wisconsin, Madison.

In any case, from the Science article:

“Our logic was to start at the extreme scenario [and work backward from that],” says Robin White, the study’s lead author and an animal sciences researcher at Virginia Polytechnic Institute and State University in Blacksburg. She and fellow animal sciences researcher Mary Beth Hall, of the U.S. Department of Agriculture’s Dairy Forage Research Center in Madison, began by estimating the impact of converting all land now used by the livestock industry to cropland for human food.

What? They began by estimating the impact of converting all land now used by the livestock industry to cropland for human food. Why in the world would they have done that?

Consider this: "Some 40% of the world’s land surface is used for the purposes of keeping all 7 billion of us fed ... And the vast majority of that land — about 30% of the word’s total ice-free surface — is used not to raise grains, fruits and vegetables that are directly fed to human beings, but to support the chickens, pigs and cattle that we eventually eat." (The Triple Whopper Environmental Impact of Global Meat Production. Time. 2013.)

So, we use about 10% of the world's land surface to grow all the non-animal food we eat. So, following the authors' methods, presumably, if we don't eat meat, dairy, etc., we will need four times the amount of everything else we eat. What? They must imagine a vegan diet as something akin to a county fair all-you-can-eat-contest. Maybe they think we eat out of a big bucket. My evening meal? 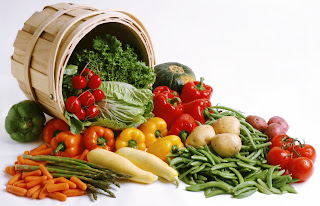 They also make the wild claim that even if we eat bucketfuls of nuts, grains, fruits, and vegetables, that we will all have serious vitamin and nutrient deficiencies. You just can't be healthy on a vegan diet say these unbiased animal agriculture professionals:

Looking at the nutritional content of crops now produced, the team also found that a plant-only system wouldn’t be able to meet the U.S. population’s requirements for calcium, vitamins A and B12, and a few key fatty acids. “With carefully balanced rations, you can meet all of your nutrient requirements with a vegetarian diet,” White says. “But the types of foods that seem to do that, we don’t currently produce in sufficient quantities to make it a sustainable diet for the entire population.”

One of the claims that sounds on its face like it might be a real problem is the questiomn of fertilizer. The authors seem to believe that everyone is fertilizing their fields with manure. As if. Here's what Wikipedia says about the production of modern fertilizers: "Nitrogen fertilizers are made from ammonia (NH3), which is sometimes injected into the ground directly. The ammonia is produced by the Haber-Bosch process. In this energy-intensive process, natural gas (CH4) usually supplies the hydrogen, and the nitrogen (N2) is derived from the air. This ammonia is used as a feedstock for all other nitrogen fertilizers, such as anhydrous ammonium nitrate (NH4NO3) and urea (CO(NH2)2)." No cows or manure involved. Discomfort with the various costs of these processes was an impetus for the organic farming movement.

But if we all embraced a vegan diet and also wanted it to be organic, that wouldn't be an issue either. By freeing up so much land, crop rotation and fallow fields over-planted with nitrogen fixing legumes would easily supply more than the space and fertile soil needed to grow a bounty of foods. And, greenhouse gas emissions would be dramatically reduced, ground water pollution and runoff from feedlots and dairies, etc. would end, people would be much healthier, we would end the farmed animal holocaust. That's win, win, win, win, win.

That's what would happen if all Americans went vegan.