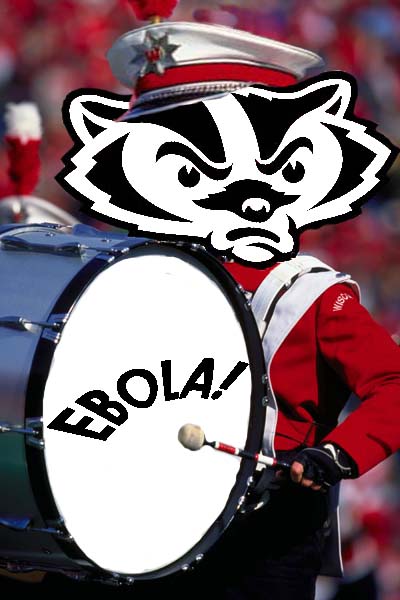 Rust never sleeps. Neither it seems does the University of Wisconsin-Madison animal experimentation propaganda machine. This essay is a response to the April 23, 2015 ersatz news article "In Sierra Leone, a chance to learn from Ebola," written by Kelly April Tyrrell.

Ms. Tyrrell's article will leave most readers misinformed. I've come to view such pieces as violations of authority. The university has a clear obligation to the public to be as accurate and complete in its reporting to the public as space reasonably allows. Sometimes the full story cannot be told in a page or two, but the university has a responsibility to avoid publishing information for the public that is likely to lead to false conclusions. Knowingly doing so is trickery. It is unethical for the university to trick the public into believing falsehoods, doubly so when the bamboozle benefits the university's financial or public relations interests.

His studies had always involved common laboratory models, like mice and special cell cultures, and took place in high security laboratories like the National Institutes of Health Rocky Mountain Laboratories in Montana, where researchers gown up in airtight, spacelike suits and look at how these models respond to infection.

Now [his December 2014 trip to Sierra Leone], he had a chance to study a disease in the very people who were living and dying with it.


“The Ebola virus is identified almost every year now, but it has been contained because it has happened in countries where Ebola virus appears consistently,” says Kawaoka. “This outbreak is different. This outbreak occurred in an area where we never had Ebola outbreak, so the local people did not know how to contain it."

Nonsense. No one knows what stops an Ebola outbreak. Consider the history of all known prior outbreaks against the backdrop of the most recent event which began in 2013 and so far has resulted in 26,109 cases and 10,835 deaths.

1976 Sudan. 284 cases, 151 deaths. That is considered the first known outbreak. Did Sudan have measures in place to contain this previously unknown disease? Or Zaire in 1976, when 318 cases led to 280 deaths? Why doesn't Kawaoka know the history of the disease; why didn't the university do a little fact checking? In fact, in the seventeen known outbreaks that preceded the 2013 event, only one involved more than 400 people and nine involved less than 100. [http://en.wikipedia.org/wiki/List_of_Ebola_outbreaks See too: http://www.cdc.gov/vhf/ebola/outbreaks/history/chronology.html] It is astounding that anyone seriously believes that the poor African nations where the previous outbreaks occurred, Sudan, Zaire, Gabon, Uganda, and the two Congos could have mechanisms in place to contain an outbreak, or that given the relatively small short-lived, apparently self-limiting nature of these outbreaks, that they would even try. People who imagine that they did and do must not have spent much time in Africa.


... in March 2015, he published a study in the journal Science describing a vaccine shown to be both safe and effective in mice, guinea pigs, and nonhuman primates. That vaccine could be produced for clinical trials in the next couple of years, Kawaoka said at a public hearing at the Wisconsin State Capitol on April 21.

This is the second time I've seen the university refer to Kawaoka's vaccine as something that could or might make it into clinical trials someday. (Here's the other.) But just in today's news I read that other Ebola vaccines are already in clinical trials. In spite of his many years studying the virus, he is apparently years behind those who apparently started their Ebola vaccine development just recently.

In a related story published on April 22, 2015 in the Badger Herald, "UW researcher outlines effectiveness of new Ebola vaccine Vaccine may enter human clinical trails in two years," by Shawn Bhatti, obviously stimulated by the university's recent ballyhoo about Kawaoka, the public, this time mostly students perhaps, are further hoodwinked:


To prove the vaccine’s efficacy, Kawaoka said he and his team tested it on various animals. After experiments showed the effectiveness of the vaccine in rats and guinea pigs, Kawaoka’s team advanced testing the vaccine on non-human primates.

“Primates are the golden standard for Ebola work, but for ethical reasons we have to show the efficacy of the vaccine in rodents first,” Kawaoka said.

The control group Kawaoka’s team immunized with a deactivated version of the Ebola virus was not protected and subsequently died, he said.

But rats and guinea pigs don't get Ebola. I shouldn't be so critical of student writers, but their reporting on the university's animal research sometimes appears to me to be an exercise in propaganda rather than basic reporting, and the university has degree program in propaganda. if their paid spin-doctors bend the truth, why wouldn't they feed misleading facts to a student writer?

Anyway, any claim that Kawaoka's work is ethical is suspicious. Here's a chart from one of his many papers that shows the possible suffering of monkeys used in his Ebola experiments. 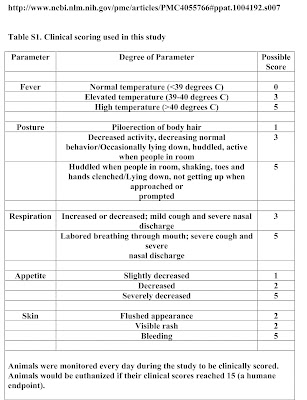 It looks like a monkey balled up on the floor of his cage, his hands and feet cliched in pain, and bleeding from his skin would need to develop additional symptoms before Kawaoka thought that the humane thing to do would be to kill him. That's not a band wagon most decent people would knowingly get on board -- which probably explains the side-stepping and omissions in the university's "news."