The Relative Hideousness of Our Interactions with Other Animals

I’ve been thinking about how one might go about comparing or weighing the different ways we heap harm upon other animals. Human laws already do this sort of thing. Laws commonly rate unintentional killing of another human as less serious than premeditated killing. The law generally counts armed robbery worse than shoplifting.

It seems like there could be some way to measure or at least rank the harms we do to other animals. The more I’ve thought about it though, the more difficult it has become to identify the metrics that might be used to determine where some harm might be placed in relation to other harms.

Potential factors are things like the length of time an animal suffers, the degree of pain they experience, the way we manipulate their lives, and our intentions and motivations.

Is a lifetime of social isolation, close confinement, and chronic hunger – like one of the monkeys used in a lifetime caloric restriction experiment more or less cruel than a Spanish bull’s one day of horrific torture? 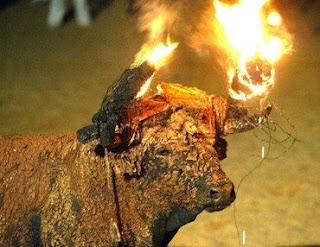 It isn’t clear to me that we have the ability, the concepts or vocabulary, to compare two instances of cruelty like these. 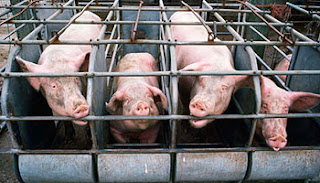 Is a pig’s short life in a crate less horrible than the experience of a dolphin corralled and slaughtered? 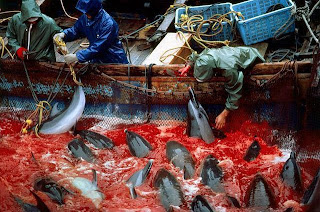 The U.S. and other governments have made a weak appeal to an animal’s particular species. This appeal is written into the U.S. Animal Welfare Act. In the UK, the rules governing animal use say:

The Secretary of State shall not grant a project licence authorising the use of cats, dogs, primates or equidæ unless he is satisfied that animals of no other species are suitable for the purposes of the programme to be specified in the licence or that it is not practicable to obtain animals of any other species that are suitable for those purposes.

But claims regarding relative suffering based on species membership are always speculative. One of the authors of The IACUC Handbook writes: “This author remains skeptical that mice are sufficiently less sentient than larger mammals for this concern alone [species] to drive the replacement effort....”.

All these problems aside, many of the things we do to animals can be roughly rank ordered on a suffering scale of sorts.

So, generally speaking, when presented with some cases, it can be a fairly straightforward and obvious choice when trying to decide which one is the worse.

Motivation and intention also come into play. The suffering of a squirrel who darts out in front of a car and is hit might be as horrible as the suffering of a rat whose spine has been crushed in a lab, but on a cruelty scale, a scale of hideousness, they do not seem to be very similar.

Likewise, the very few genuine cases of obligatory subsistence hunting that still exist should rank lower on the hideousness scale than trophy hunting.

It is difficult to select metrics that can accommodate the various factors that come into play when trying to place a single case in the universe of cruelty index.

Maybe, like our criminal justice system, each case has to be judged both separately and in relationship to other similar cases. But maybe some general rules of thumb could be applied.

In the case of captivity of non-domesticated animals, I think we could come up with some reliable and consistent measures. For instance:

Available Space. We could compare the space an animal would normally use in the wild and compare it to the space available to him or her in captivity.

Taking even the lower end of the natural range of a wild rhesus monkey, we could characterize the degree of their environmental restriction. If access to their normal amount of space is thought of as 0 on some cruelty scale, then the ratio of natural to captive, or in this case 1076 to 6 might represent a cruelty value as far as available space is concerned.

So, in this case we could say that the Available Space cruelty factor for a typical rhesus monkey in a lab in the U.S. is 179. Of course, in the wild, rhesus monkeys live in rich three-dimensional environments and to accurately sum up the Available Space cruelty factor we would have to find a way to characterize the mind-numbing environmental deprivation they endure.

In the wild, rhesus macaque group size ranges from 10 to over 240 individuals. In the average lab, the majority of rhesus monkeys are pair housed or individually housed. It’s probably fair to call it 1.5 animals per group on average. So, again taking the lower end of the naturally occurring group size, and calling 10 animals in a group 0 on some cruelty scale, the Social Opportunity cruelty factor for a rhesus monkey in a lab would be about 7.

Another quantifiable factor that could be quantified and would could help us judge the relative cruelty might be Suffering Prior to Death.

Hunters routinely appeal to the quick death associated with the ideal bullet or arrow wound. And it seems reasonable to assign a value that indicates less suffering when death is sudden and comes without forewarning and isn't preceded by fear, pain, or some other distressful experience. So, we could try to determine the actual time it takes to kill an animal and combine that with the time leading up to his or her death if that period is distressful and the distress is part of the process of killing them.


Because the technique is administered by trained sharpshooters using high-powered rifles to kill deer over bait, death is instantaneous. Because the technique uses sound suppression devices, deer and other animals in the area are not frightened or stressed. Some people may object to this method because it involves killing an animal.


If their death is indeed instantaneous, is unsuspected, and doesn't frighten other deer in the area, then as far as the killing itself is concerned -- aside from the ethical issues surrounding the killing, generally -- the Suffering Prior to Death cruelty factor might be 0.

The very common Canada goose round-ups that occur around the country every year are an example of a activity with a higher Suffering Prior to Death cruelty factor. Geese are unable to fly while the are molting; this is when federal agents round them up. Because they can't fly, they must be particularly wary of predators. Additionally, they have their goslings with them who they must feel need protecting.

Agents show up, herd them into corrals, separate the goslings from the adults. Put the adults into cages, load them on a truck, drive them sometimes long distances to a poultry butcher or plant, and then serially kill them. Meanwhile, the goslings are caged, loaded onto a truck, and driven to a USDA office, unloaded, taken into a building, put in a gas chamber, and then asphyxiated.

Assuming it takes 24 hours from the time the geese become alarmed to the time they die -- and it can take much longer -- then we could assign a number related to the time it all took. Perhaps a Suffering Prior to Death cruelty factor of 24 would make sense.

d-CON's ad for their "Quick Kill Glue Trap" says it will: "Kill mice quickly, so there’s no waiting and possible squealing for days." Killing mice in the traps they are competing with must have a Suffering Prior to Death cruelty factor much higher than 24.

Perhaps you have begun to imagine the many difficulties in devising a scale that would somehow capture all such variations and result in a meaningful rank ordering of specific cruelties. Maybe a universal scale isn’t possible, but I think we could come up with a set of measurements that could be applied to many cases.

If we were able to come up with a ranking method to order different cruelties, what would we do with the list?

I was thinking that the post would end with something like "if we had a good method of comparing acts of cruelty, we should tackle issues where the cruelty index is the highest". To figure out which animal cruelty issues are more important to fight, though, we should also consider: the number of animals that issue affects, and how effective our fight will be.

Perhaps a formula for ranking how important it is to tackle a certain issue would be:
[number of animals affected]*[cruelty index of the average animal]*[probability that we're able to lessen this cruelty].

I think you are right about a cruelty index being able to help guide people's efforts aimed at stopping or lessening suffering. I think too, that simply having such a scale and being able to point to some form of cruelty and being able to say something about its relative hideousness would in and of itself motivate action and change. In the case of vivisection, committees might be less likely to approve a project if it had a high cruelty rating on some generally accepted scale.