Keeping giraffes in Wisconsin is like forcing a polar bear to live in Amazonia; problems are inevitable.

In Wisconsin, famous for it's long bitter winters, animals adapted to the tropics are kept indoors during the long cold spells. Forcing animals who are obviously designed for walking to stand in place for days, weeks, and even months at a time is matter-of-factly cruel and inhumane.

A few years ago, giraffes at the Henry Vilas Zoo in Madison, Wisconin, were killed when it was determined that their chronic joint disease was untreatable. Killing them was the "humane" thing to do.

A second giraffe has died in less than a month at the Henry Villas Zoo in Madison, a victim of a degenerative bone and joint disease that officials say afflicted his entire family.

The 7-year-old giraffe named Raymond Junior, or RJ, was euthanized Tuesday after severely rupturing his hip joint, making him unable to stand.

His 12 year-old father Raymond had been euthanized under similar circumstances a month ago.

It was predictable and to be expected. Now there are more giraffes at the Vilas Zoo. Their joints are probably corroding away from inactivity even as I write this. They'll be "humanely" killed and new ones will be acquired at some point.

Kilbourn Fire Chief Scott Walsh said the fire was not suspicious but is under investigation by Wisconsin Dells Police.

Walsh said nothing was left of the barn that housed the two giraffes. The animals had been shut in the barn, he said, and no one was there when the fire started to open doors to get them out.

Giraffes don't belong in a barn anymore than an eagle belongs in a aquarium. 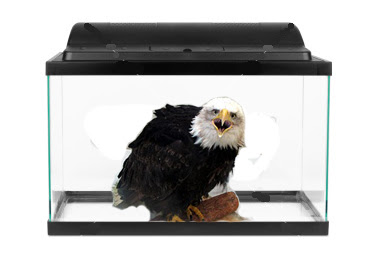