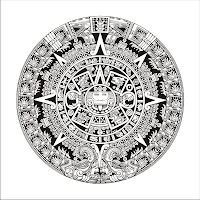 So I’m an optimist. More likely, things will just keep rolling along, like a big ball of crap picking up more shit as it continues going down hill.

Terrance McKenna, the late ethnobotanist and fearless explorer of plant-induced alternate realities, sometimes referred to as a psychonaut, visionized from his drugged perspective that the Mayan calendar’s so-called end date, December 21, 2012, is actually an asymptote, the point in time when, according to him, complexity becomes infinite and the world as we know it ends. 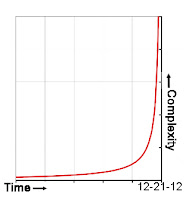 Things have become more complex over time and in some areas of some people’s daily life complexity does seem to be accelerating. Many of us now carry small hand-held devices that allow us almost instant access to a large and fast growing body of digitalized stuff; the devices take photos, videos, play music, keep the time and let you play Scrabble with people across the globe between phone calls. As one ad tells us, “when there's no limit to what Droid gets, there's no limit to what Droid does.” No limit... that’s an arithmetic increase as opposed to the exponential advancement envisioned by McKenna.

But many things seem to be stuck in time. Very little changes in some areas of everyday life.

Take public relations and the cruelty that occurs in the nation’s many animal labs. Not much acceleration in that arena. Suffering, lies, suffering, cover-ups,

suffering,.... it just seems to keep rolling steadily along. Absurdity, stupidity, and greed seem a pretty constant part of that area of life as well. Maybe rubber stamps have a magical power to stop time; they definitely have the power to create Hell on Earth.

One of the stuck-in-time, routinely dull and witless things I’ve seen from the lab crowd recently involves the willingness to swallow whole a completely ridiculous claim and then rely on that massive and matter-of-fact glob of nonsense to justify immense suffering. As always in this arena, money and station trump normal human emotions like mercy and compassion.

Here’s the big glob of nonsense: Ned Kalin, a vivisector at the University of Wisconsin, Madison says that his newest experiment on baby monkeys will lead to a new drug that will prevent or cure “anxiety, depression, and other forms of psychopathology” caused by “parental stress, physical, sexual, emotional abuse, neglect and inadequate parenting.” And two oversight committees swallowed it whole, belched a bit, and then gave it their stamp of approval. You can read his protocol here. The quotations above are from a letter he wrote to a reporter about his project.

If Kalin had a string of wildly unlikely successes from his past research maybe the committee members would have had a reason to swallow this wild claim and endorse this new round of cruelty, but he doesn’t. It’s hard to find anything beneficial that has resulted from his decades of hurting and killing animals.

Why would anyone believe such a wild claim from someone who has nothing to show for decades of similar claims? Why would they say OK, go ahead and hurt and kill some more monkeys?

Unlike the world of increasing complexity McKenna thought he saw, this situation isn’t even complicated. It’s not new or any different from what has been happening in the labs since about the mid to late 1940s when the U.S. government began pouring money into basic biomedical research. (That stream of money has grown rapidly, so maybe there’s hope yet for McKenna’s prophesy.)

There are three basic reasons the members of the committee swallowed that bolus of garbage and gave him the go-ahead. In decreasing order of significance, these are: the power of the System, money, and the PI’s prestige, standing, tenure, position, power, etc.

The System here is the phenomena discussed widely and supported by much experimental social and psychological research demonstrating that people operating within such systems are controlled by it. In this case, the System is designed and expected to approve research project. So it does. The cogs all do their jobs and the output is as it was intended it would be.

The System controlling the behavior of the committee members is designed to approve projects because they come with large dollar sums attached to them. This money, approximately $200 million in the case of the UW’s funded experiments using animals, is lifeblood to the institution. Turning down even a bit of it down would be like putting a tourniquet around your thigh and letting your leg die. Kalin has a proven track record of contributing to this stream of money for the institution; the System encourages him. 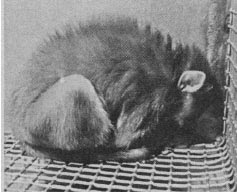 Prestige and the power it brings with it in the System probably came into play in this particular case. Kalin is the chair of the Department of Psychiatry. His colleague Paul Kaufman, also a primate vivisector, is the chair of the Department of Ophthalmology. University staff has refused to give their opinions of his glaucoma research because they feared his power. Kaufman’s lab has had problems with its animal care, but his experiments are always approved. I only speculate, but it’s likely that if some junior newly hired vivisector had asked for permission to resurrect Harry Harlow’s infamous methods of inducing depression and anxiety in baby monkeys, even if they had been promising a cure for cancer, they might not have had their project approved out of some concern about possible bad press. But then, if it came with enough money, maybe they would have; money trumps prestige, even the lack of it.

We know science is difficult for you to understand.

No, the world will not end despite your hopes to the contrary. Scientists are so sure about this that NASA already has already released a video for the day after:

Science is difficult for most to understand. Why? Because scientist feel they are more superior to people like me and therefore I have no right to question them. Not!