People react in various ways when the parallels are pointed out between the horrible things we have done to humans and the horrible things we continue to do to other animals. Some of us shake our heads and lament the sad results of our flat learning curve, others of us bristle at the audacity or insensitivity of comparing an animal’s pain and fear, particularly their death, to the pain, fear, or death of a human. 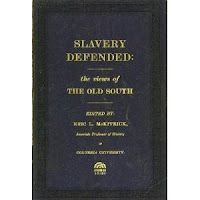 Similar arguments were undoubtedly made in the past when people voiced a concern about the way enslaved blacks were being treated in the South...

It follows, from what has been stated, that it is a great and dangerous error to suppose that all people are equally entitled to liberty. It is a reward to be earned, not a blessing to be gratuitously lavished on all alike; -- a reward reserved for the intelligent, the patriotic, the virtuous and deserving; -- not a boon to be bestowed on a people too ignorant, degraded and vicious, to be capable either of appreciating or of enjoying it. Nor is it any disparagement to liberty, that such is, and ought to be the case. John C. Calhoun. Disquisition on Government. 1854. In Slavery Defended: the Views of The Old South. McKitrick, Ed. 1963.

It seems to me that the language of equality has always been an assertion that the un-enfranchised person is morally equivalent to the people in power and deserving the same rights precisely because of their equality.

It is worth some notice too that members of exploited groups are frequently dehumanized and branded as mere animals. (Much space has been devoted to this device by Phillip Zimbardo in The Lucifer Effect: Understanding How Good People Turn Evil. (2007.) For instance, on dehumanization and seeing others as less than humans he writes:

... dehumanization automatically facilitates inhumane actions. When we dehumanize people we transform them into objects and can ignore their demands and pleas...

... The Nazi genocide of the Jews began first by creating ... a national perception of these fellow human beings as inferior forms of animal life...

It seems reasonable to think that humanizing an animal, by pointing out how much he suffers when he is hurt in the same way humans were when they were animalized, might help people to see them in a different, more positive light.

It’s impossible to think much about the matter of comparing the horrible things we have done to humans and the horrible things we continue to do to other animals without calling to mind Marjory Spiegel’s The Dreaded Comparison: Human and Animal Slavery. (1988.) In her preface to the book, Alice Walker makes it clear that she found the comparisons apt and disturbing. The small volume is filled with parallel images – precisely the sort of images critics of any comparison find particularly worrisome and inappropriate.

The criticisms of making such comparisons seem to have another flaw. As I understand one particular argument, one ought not use any particularly heinous situation as a means of calling attention to the hideousness of another because in doing so one inadvertently diminishes the evil that was visited upon the group that suffered the original harm.

But to me, the opposite is true. One calls attention to the horrors of the Middle Passage when trying to characterize the suffering in a battery cage facility because the now acknowledged and widely-decried impossibly cramped conditions and the stifling atmosphere and resultant suffering of the Africans ought to help us understand why it is wrong to keep chickens in tight, cramped, conditions and having to endure a stifling atmosphere.

It is salt into a wound for some to then hear the kicker – the Middle Passage took six weeks; chickens spend their entire too short lives in such circumstances and suffer crude mutilations as well.

The most common reaction to such comparisons comes from people who see nothing wrong with hurting and killing animals. How dare you compare a chimpanzee to a black, or a Jew to a rat!

But that’s just the point. I am like a rat, and so is every other human, when it comes to suffering and probably to the capacity for joy. I’m not entirely sure about joy in rats though; the rats I’ve known have definitely been excited about favorite foods and items. But I’m very sure about joy and excitement in chimpanzees and dogs. In fact, as I’ve written before, I think dogs have a higher capacity for joy than humans do, but I don’t think it would demean dogs or the experience of the dog tribe to say that some human seemed as happy as one.
at 6:45 PM