He says I support violence against vivsectors, and I guess I sort of do in a manner of speaking. I genuinely believe that what we are doing to animals dwarfs the evil humans have heaped on other humans. The ratio of harm we've done to animals compared to the harm we've done other humans looks something like this:

Too great to quantify/a lot.

A mathematical rationalizing of this ratio would probably yield a gigantic positive number if nothing other than the affected population of each of each group was substituted for the characterizations -- assuming there was a way to reasonably estimate those values.

If the subjective suffering of the individuals represented by those numbers could be reasonably estimated, the resulting value would dwarf even that gigantic number.

Given this impression, I'm not terribly saddened when a proponent of hurting animals dies. I say, good riddance. That's cold, but it's also the general consensus of Americans when it comes to killing suspected terrorists or certain suspected criminals. In this regard, my opinion of what happens to despicable people appears to be clearly in the mainstream. I feel some guilt that I'm not more progressive on this matter and more in line with the majority of animal rights activists who seem in toto to embrace the notion of ahimsa even when it comes to opinions about what is or isn't the appropriate response to supporters, advocates, or participants in mass torture and murder.

[Murder is a term reserved for killing humans, but this reservation is merely an artifact of this point in time. I use it here both narrowly and more broadly. I hope it will be used generally sometime in the future to include the willful killing of animals other than only humans.]

I've expressed my opinion on this matter more than once on the Internet. Ringach has collected a few of my occasional despondent and dark comments and uses them in what is formally referred to as the Ad Hominem fallacy to deflect or discredit my on-line comments. A recent example of such an attack was seen on Scientific American's webpage discussion about the magazine's editorial position that experiments on chimpanzees should be greatly curtailed. See Ban Chimp Testing: Why it is time to end invasive biomedical research on chimpanzees. The Editors. September 28, 2011.

If you read through the comments, you'll see Ringach accusing me of a series of nasty comments -- and I've certainly made any number of them. But he also accuses me of not having read an essay he wrote that he says explains his position on our use of animals and moreover, why he thinks chimpanzees but not monkeys should be reserved for studies of major diseases.

Those who actually know me and happened to read his accusation must have had a real belly laugh. Accusing me of not reading (let alone thinking about) a vivisector's published explanation and justification for hurting and killing animals is like saying Rick Bogle eats beef. On this point, Ringach is as wrong as wrong could be.

If you've read to this point, congratulations you masochist. The rest of this rambling rant is a rejoinder to Dario Ringach's essay "The Use of Nonhuman Animals in Biomedical Research" published in the American Journal of the Medical Sciences. 2011, and particularly his claim that "a graded moral status of living beings" ought to be employed to determine who can be used in harmful scientific experiments.

"I believe moral status to be graded according to the cognitive capabilities of each living being."

This is a dangerous and frightening idea. 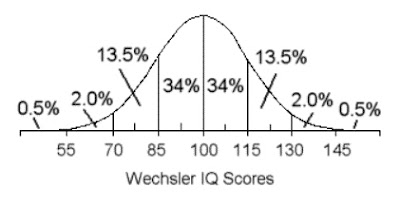 This is the normal distribution of intelligence quotient scores on the well-known Wechsler Adult Intelligence Scale (WAIS).

Where along this distribution would Ringach draw his line? How smart would one have to be to escape being selected for the vivisector's knife?

Ringach says: "Ethical boundaries may shift as we learn more about animal minds, but given our current knowledge, there is good reason to grant humans the highest moral status followed by great apes, dolphins, monkeys, higher mammals, rodents, insects, and so on."

This might sound reasonable at first blush, but it turns out to be fairly meaningless and hollow. First, what is it about all great apes that sets them cognitively above all other animals other than humans? Given the dire results of the determination, it ought to be something that is easy to discern.

Ringach puts "dolphins" between great apes and "monkeys." So, again, given the dire consequences of one's position on Ringach's graded scale, the cognitive abilities that serve as the dividing point ought to be spelled out pretty clearly and the reason that they are the deciding factors ought to be explained and be understandable.

I have to wonder too about his use of the words "dolphins, monkeys, [and] higher mammals." His list makes me suspect that he isn't much of a zoologist, let alone a knowledgeable judge of comparative intelligence.

There are at least 33 recognized species of marine dolphins, 4 river dolphins and 6 porpoises. It is unlikely that these species have uniform cognitive capabilities. Moreover, it is unlikely that individuals of the same species, say all the members of the species Stenella attenuata, have the same cognitive capabilities. In all likelihood, if we could measure their IQs the results would result in a graph like the one above.

The problem for "monkeys" is even greater. There are about 200 different species, all of which have genetically derived social, behavioral, physiological, and cognitively unique characteristics; how should we rank order them to determine the degree of suffering they can be subjected to as tools for us?

And what should we make of Ringach's term "higher mammals"? The notion of higher and lower life forms is an artifact of the pre-Darwinian idea called the Great Chain of Being or the scala naturae. It is a completely debunked Christian theology-driven notion that few biologists still endorse.

A big problem with Ringach's scale of being is that species he apparently puts near the top, like monkeys (even above "higher mammals"), do not appear to be off limits to any insult as a result of their relatively high position.

For instance, Ringach says, in the interview with him here, that he was inspired by his UCLA colleague David Jentsch to start speaking out in defense of vivisectors. It seems fair to surmise then, that Ringach finds Jentsch's use of monkeys fitting given their cognitive abilities and resulting moral grade.

Here's an example of Jensch's use of monkeys:

Let’s try to put Jentsch’s PCP injections into context and imagine the situation from the monkeys’ perspective.

Jentsch injected 15 to 30 times (0.3 mg/kg) the normal recreational dose of PCP into animals, ripped from their families, trapped in cages and being manhandled, who then start having unending nightmarish hallucinations for reasons they can’t imagine. And this went on for two solid weeks, prior to him killing them.

Its hard for me to see how being near the top of Ringach's graded scale of moral status means much of anything.

I think it's clear that his graded scale of moral status is either a rhetorical device or a delusion. There isn't a scale when everyone below the top position can be used as those at the top wish.

A couple other quick things.

The first part of Ringach's article is an attempt to refute the idea that the use of other animal species isn't a very productive research modality when it comes to progress in human health-care. He challenges what he says are "common criticisms" of using animals.

The funny thing about his article is that the "common criticisms" he takes issue with are essentially all from a single critic. It's hard to tell, since he cites only Ray Greek's work in this area, but Ringach doesn't seem to be very well read.

Ringach makes an odd claim that I haven't been able to understand. He says that if there were an obvious advantage to human-based research that we would know it by now, and that he is unaware of any data that support this idea. I don't know what to make of this. He ought to be able to stack up the resulting benefits of human-based research and the resulting benefits of animal-based research and come to some sort of reasonable conclusion as to which one is most productive. How can he be completely in the dark about the data that could be looked at? Maybe I'm missing his point.

I don't know much about the American Journal of the Medical Sciences, where his article was published, but they should have done a better job editing his paper. There are a number of factual, grammatical, and typographical errors as well as some contradictory and illogical passages. Perhaps he will revise and tighten it up at some point in the future. I look forward to reading it again if he does so.

[I don't know whether Ringach eats animals. If he does, then all his justifications for using animals in science are just hollow nonsense. If the flavor of their cooked flesh is sufficient reason to use them, then we hardly need highfalutin claims about the value of the science. The tax money given to the vivisectors would be more than adequate justification to an animal eater.]
at 1:36 PM

Be sure to read Ringach's rant linked in the comment above. See if you can find an understandable explanation of his claim: "I believe moral status to be graded according to the cognitive capabilities of each living being." He seems to be saying he doesn't believe it after all, (which I don't think he does, and was the point of my rejoinder.)

It seems that he and other proponents of using animals as we might wish, have only sound bites to offer. When they attempt to mount a rational self-consistent argument, they end up following their confused ideas down dead-end holes.

It is easy and convenient to claim that I encourage the murder of vivisectors; I don't, but that doesn't fit with their mass hallucinogenic image of who I am. I've written about this phenomenon before; my last name must be Bunyan.

What I have said, and what they can't seem to or won't grapple with, is that terrorism actually does work at times. Saying so doesn't make one a terrorist. What I've said is that the possibility that someone will resort to such methods, as I wrote about in my fictional Vegan Nation, should motivate us to circumvent that possibility, to release the pressure, by creating more open public dialog on the matter. Unless we can create a venue that invites public participation and increases public knowledge, someone may opt in for the fast and dirty route at some point.

And for the record, I'm personally responsible for more public debates with vivisectors and more public discussions on the controversial use of animals in science than almost anyone else I know.

And for the record, the only reason there has not been even more open public discussion is the simple and ubiquitous problem that vivisectors and their supporters are so, almost uniformly, unwilling to talk honestly before a public audience about the details of what they do or is done to animals.

It is easier for them to cast me and others as terrorists than to talk in public about the things they they work so hard to keep hidden from public view.