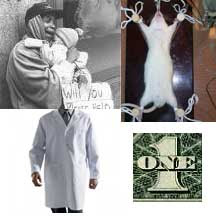 A brewski or a hoagie?

What this means, or should mean, is that we have to prioritize the things we do and things we spend our money on. If I buy a big screen TV and don’t have enough money left over to pay my mortgage or to buy food for my family, it seems pretty clear that the opportunity cost of the TV was too high. Food and shelter for one’s family are more important than a TV, and in most cases, food is more important than shelter.

The National Institutes of Health (NIH) and the recipients of the tax dollars funneled through the agency don’t seem to see the world in this way.

A child or a rat?

The statistics on hunger in the US are sobering.

And yet, NIH pours ever-increasing amounts of money into the gaping maws of vivisectors, paying them to perform cruel experiments designed to answer questions of dubious value.

Vivisectors regularly make the claim that most people would choose the life of a child over the life of an animal, like a rat they commonly say, and I suspect they are right. But, in fact, vivisectors choose experiments on rats over meals for kids.

The opportunity costs of animal experimentation can’t be overstated. In plain simple language, food and shelter for everyone should be government’s number one concern. Until everyone is guaranteed a healthful diet and snug shelter from the elements, every other government expenditure of tax dollars, particularly dollars spent in the name of health care, is immoral.

Moreover, the people lining up at the public trough and competing for those tax dollars by claiming that they are concerned about their fellow humans are particularly grotesque.

It’s one thing for, say, a plumber, to hire him- or herself out to fix a leaky faucet or to install a new toilet, and to put the money earned from providing that service into the bank or to spend it on a new TV, but someone eating taxpayer dollars in the name of public health and medical advancement, who argues that their work is justified by the potential benefits to sufferers of some malady, those people seem to bear a greater – a much greater – responsibility for the lost opportunities to feed hungry kids that result from their career choices and competition for limited tax dollars.

If someone really cared about people’s wellness and health, the last thing they would do, it seems to me, would be to use tax dollars to investigate the biology of mice, rats, dogs, or monkeys, while human children and human families are struggling to find food and shelter.

Let’s look at some specific examples and put a dollar amount on them and try to measure the opportunity costs in terms of hungry children in the United States.

The vivisection industry recently spent $1 million in an effort to convince people that spending public funds to hurt animals would be a good thing if the harm and torment they are forced to endure led to some medical advance; they didn’t put it in so many words, of course, but they may as well have. See: Animal researchers spend $1M to drum up support. Minneapolis Star Tribune. November 9, 2009. [See too: ProTest and Hansen's Disease]

According to NIH’s Research Portfolio Online Reporting Tool(RePORTER), nearly 1000 studies involving experiments on rats were funded by the recent American Recovery and Reinvestment Act of 2009. Here’s one example:

“We will conduct a preclinical trial in rat models of ROP [retinopathy of prematurity] by downregulating two energy-demanding processes in the rods: the dark current and the visual cycle. We anticipate that this approach will compare favorably with the best currently available medical management. To produce in rats vascular abnormalities similar to those that characterize human ROP, pups are exposed to high and low oxygen during the first days after birth; the induction ends at postnatal day 14.”

According to Feeding America, every fifty cents donated provides one bag of groceries. Assuming that an average child can be fed for three days with an average bag of groceries (and that seems wildly conservative to me), the $402,379 in tax dollars the NIH gave to Akula could have purchased 804,758 bags of groceries, or, in other terms, it could have fed 2,414,274 children for a day.

I’m not singling out Akula; the $402,379 he received is a tiny speck of the multi-billion dollar Recovery Act monies that were awarded to NIH. Akula is merely is one of the approximately 990 named researchers receiving Recovery Act funds who are using rats.

NIH’s RePORTER tool has a handy feature: you can export data to an Excel file. Unfortunately, it has a 500 record limit. Even so, exporting the first 500 rat vivisection records and totaling the tax dollars they are receiving yields $124,499,092.

Putting this in terms of children who may go hungry because the National Institutes of Health chose to fund experiments on rats rather than provide those most in need of the most fundamental thing in life – food – we can begin to see and draw conclusions about just who in society benefits from animal experimentation. 500 rat vivisectors shared $124,499,092 while 746,994,552 children went without food for a day, or 106,713,507 kids went hungry for a week, or 62,249,546 went hungry for a month, or 2,046,560 went hungry for a year. 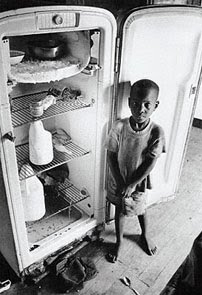 Apparently, we chose to pay 500 vivisectors to experiment on rats rather than feed over two million American kids for a year. Something seems out of whack here. We seem to have lost sight of our responsibility to the weakest most vulnerable members of society and to the opportunity costs associated with animal experimentation.

And that $1 million the Foundation for Biomedical Research just spent on misleading billboard ads?