I am sometimes asked, if animal experimentation is so heinous and dead-end, why does it keep getting funded?

Humans have the capacity to create complex systems that are too large and multifaceted for us to manage. UW-Madison vivisector and chair of the university’s Research Animal Resource Center, Eric Sangren, has used this plain fact as an excuse for the continuing problems associated with the university’s animal use. This inability to manage large complex organizations is akin to an economic diseconomy of scale. 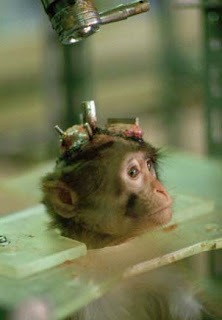 We continue to receive information from within the university concerning Michele Basso. Basso has a long history of inept surgical implantation of hardware on the skulls of rhesus macaques. Veterinarians have repeatedly called attention to her clumsy ways, the unplanned deaths of the monkeys she tortures, and her pre-germ theory theories about cleaning surgical tools.

I write about Basso here because of a recent article in TheScientist.com titled “NIH Continues to Support the Best Science through R01s: A response to accusations that the agency is biased against senior scientists.” The NIH office of Extramural Research says R01s are “an award made to support a discrete, specified, circumscribed project to be performed by the named investigator(s) in an area representing the investigator's specific interest and competencies, based on the mission of the NIH.”

The notion in the article that R01s represent the “best science” caught my eye. I looked at Michele Basso’s currently funded cruelty and saw that she has an R01:

Is this an example of the “best science”?

NIH grants are awarded when proposals receive high ratings from “Study Sections” made up of scientists working in the area that the research addresses. Turning decision-making over to small groups is like General Motors breaking its business into smaller units; giant complex enterprises do this in order to reduce the inefficiencies that come with diseconomies of scale.

I’ve listed the members of the Study Group below and have included a citation of a representative paper if they use animals.

The fact that vivisectors are chosen to determine which studies will get funded, especially vivisectors like Basso who has such fumbling methods and pre-germ theory ideas, suggests that this so-called “best science” is really something else entirely.

BASSO, MICHELE A.
UNIVERSITY OF WISCONSIN-MADISON