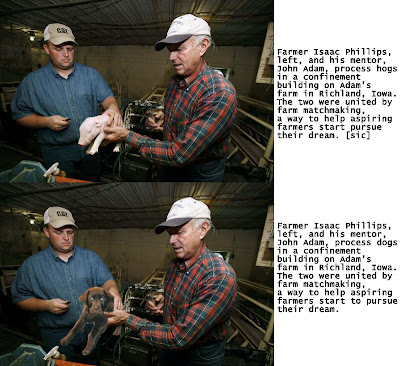 The top image is from "Farm matchmaking a way to preserve rural America," an article by SHARON COHEN, an Associated Press contributer. The article was on the front page of the Monday, August 31, Wisconsin State Journal.

There wasn't a word anywhere in the article about what was in store for the piglet in the picture. Newspapers seem to be run by zombies; the editors seem dead, to be unaware of the gross inconsistencies of the messages they send. On the one hand, they print stories about puppy mills and people running down deer and ducks on snowmobiles, presumably because they think the public should know about certain instances of animal abuse.

On the other hand, they ignore or even defend and champion the lifetime starvation of monkeys, remain mute on likely violations of state laws and federal regulations in local animal labs, and see nothing wrong with printing a photo of an infant pig getting ready to be tortured on the front page.

The problem with this is that this confused mushy-headedness is served up as high-level journalism. Far from it.

A friend wrote them a letter about the image and the very misleading glossing over of just what "confinement agriculture" actually is; I doubt that it will get printed, so I'm posting it here:

I wonder how many of your readers have any idea of the mutilation the innocent piglet “Wannabe farmer” Phillips and his “old time mentor” are holding, will be subjected to? In factory farms, piglets are taken from their mothers when they are less than a month old, their tails cut off and their testicles ripped out of their scrotums without any pain relief. Pliers are used to break off the ends of their teeth and for ID purposes, farmers cut out chunks of the ears. These social animals will spend the rest of their short lives in overcrowded pens on tiny slabs of concrete. To find out more about this unnecessary suffering, watch Mary Tyler Moore on www.wyou.org, on-line, live stream, or on Ch 95or 991 [in Madison, WI] at 11 pm this Thursday Sept 3rd.

The reporter misleads us. Animals in these “confinement” farms live a horrible existence. They are only seen as commodities. Gestation crates, battery cages and veal crates have been banned in Europe. Such cruel methods only continue in the US because the public is intentionally kept unaware of the cruel reality these sentient, intelligent beings are subjected to daily.