He called attention to text of the Animal Welfare Act and USDA regulations that are apparently intended to “prevent unintended and unnecessary duplication of research involving animals” [Sec. 2.31 Institutional Animal Care and Use Committee (IACUC) Office of Laboratory Animal Welfare. NIH. 2nd Edition. 2002.]

The pro-vivisectionist website, Speaking of Research pointed out the erroneous claim he made in his complaint. I agree with the essential criticism being leveled at Mr. Budkie's complaint. He misinterpreted the large and significant data set he amassed.

It is important to note that critics of his complaint have not claimed that his data set is inaccurate. I don’t know why he misinterpreted the data, but I know from my own work that delving into the details of what is happening in the labs can be excruciating. It can sometimes be genuinely mind-numbing. 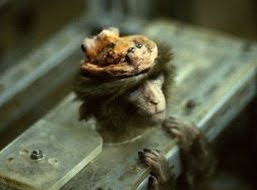 Detailed knowledge of what is happening in labs across the country is borne by relatively few activists. I doubt that there are a dozen people in the country who are as conversant with these details as Budkie; perhaps he was simply swept away by the absolute horror reflected in his data.

If you haven’t done so, look at his data. If you've seen it, look again.

These fifty vivisectors are responsible for a combined total of 526 years of restraining monkeys (commonly for long periods), keeping them thirsty and/or hungry, sewing coils to their eyes, drilling holes in their skulls, bolting hardware to their heads, and manipulating their brains. 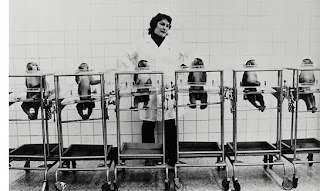 It strains credibility to suggest that there absolutely isn’t any unnecessary duplication of research involving animals in these five centuries of experiments.

No one who actually gets their head around the details Budkie points to in his data set can come away unscathed. (No human, that is; monsters might bask in this knowledge.) The suffering alluded to in the details surrounding these 526 years of experiments may be impossible to grasp. At some point, injustice and cruelty crosses a threshold that makes it impossible to describe, comprehend, or rate. Was the Holocaust worse than slavery in the Deep South? Were the Rawandan massacres worse than the Cambodian killing fields?

The real wonder is that knowledge of what is happening in the labs hasn’t led to more insistent methods of protest and resistance.
at 2:06 PM