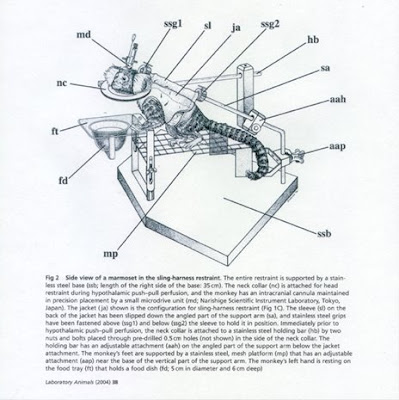 Summary [emphasis mine]
We describe a novel soft jacket and sling-harness restraint that permits species-typical postures for small-bodied primates, such as the common marmoset (Callithrix jacchus),during long-term (>6 h), continuous restraint. The restraint system is straightforward to use and manipulate, it is easily repaired, and the materials used are readily available. The soft jacket allows for increased versatility and longevity, and the sling-harness provides for greater movement and much longer duration of continuous restraint (up to 3 days) compared to a previously described, more conventional chair restraint for small-bodied primates. The new restraint system prevents the normal diurnal decrease in plasma cortisol levels across the daylight hours; however, it does not disrupt ovulatory cycles. Unlike the previously available techniques, therefore, this new restraint system is applicable to many neurobiological and neuroendocrine studies involving small-bodied, non-human primates and is especially suited to investigations requiring the maintenance of relationships within social groups.

.... This system permitted such complex techniques as hypothalamic push–pull perfusion with simultaneous sampling from an intravenous cannula. Our findings demonstrated that marmosets quickly adapted to 3 days of continuous restraint in this novel system,

This is an example of the reality of the primate labs.

Earlier this year, veterinarian Eric Sandgren, Director of UW-Madison's Research Animal Resource Center, and chair of two campus animal research oversight committees asserted that push-pull perfusions were no longer being conducted on monkeys at the UW. This came in response to a query regarding one of the committees' minutes concering ongoing highly invasive brain experiments being conducted by Ei Terasawa on conscious rhesus monkeys. Terasawa's animal use was previously suspended for two years following the embarrassing discovery by the USDA of monkeys dying during the procedures and indecipherable (even to Terasawa) research notes. The experiments had been going on for seventeen years at the time of the government's discovery. This is yet another clear example that the oversight system at the UW (and at the other animal labs around the country) is completely broken.

But the study below suggests otherwise. These monkeys were probably restrained in the device described above.

In vivo hypothalamic gonadotrophin-releasing hormone (GnRH) release was characterised for the first time in a New World primate. A nonterminal and repeatable push-pull perfusion (PPP) technique reliably measured GnRH in conscious common marmoset monkeys. Nineteen adult females (n = 8 ovary-intact in the mid-follicular phase; n = 11 ovariectomised) were fitted with long-term cranial pedestals, and a push-pull cannula was temporarily placed in unique locations within the pituitary stalk-median eminence (S-ME) 2 days prior to each PPP session. Marmosets underwent 1-3 PPPs (32 PPPs in total) lasting up to 12 h. Plasma cortisol levels were not elevated in these habituated marmosets during PPP, and PPP did not disrupt ovulatory cyclicity or subsequent fertility in ovary-intact females. GnRH displayed an organised pattern of release, with pulses occurring every 50.0 +/- 2.6 min and lasting 25.4 +/- 1.3 min. GnRH pulse frequency was consistent within individual marmosets across multiple PPPs. GnRH mean concentration, baseline concentration and pulse amplitude varied predictably with anatomical location of the cannula tip within the S-ME. GnRH release increased characteristically in response to a norepinephrine infusion and decreased abruptly during the evening transition to lights off. Ovary-intact (mid-follicular phase) and ovariectomised marmosets did not differ significantly on any parameter of GnRH release. Overall, these results indicate that PPP can be used to reliably assess in vivo GnRH release in marmosets and will be a useful tool for future studies of reproductive neuroendocrinology in this small primate.

How macabre and stressful it must be to be a member of one of the marmoset groups that include monkey(s?) beng restrained as in the image above. This is a good example of the reasons that people continue to fight to outlaw vivisection. This is a good example of just the sort of procedure that the universities won't discuss in public. It's experiments like these that fuel the fire in people's bellies.
at 12:41 PM

even looking at that drawn diagram of the restraint system gives me chills. how researchers can wake up each morning and be part of this is horrendous.

You should know, Rick, that a paper published in 2007 uses data collected sometimes years earlier. As I correctly stated, push-pull perfusion experiments are not being used now. Second, your blog demonstrates that we do discuss this sort of procedure in public--you have provided the citations, to which you had free access. Thank you for proving that point. Third, regarding oversight, you say its broken, I say its not broken. We both use evidence to back up our convictions. Where does that leave us? In the real world, where things are not packaged up so neatly, as you would have us believe. Forth, I'm responding to correct an error of fact in your blog (that I had made a misstatement). I'm not interested and won't take part in a typically pointless back-and-forth blogging match. Maybe you could invite me to one of your meetings and we can have another of our face-to-face conversations. Finally, why do activists have such a problem spelling my name consistently?

As you know Eric, and as you stipulated in correspondence with Terasawa, she was to stop using the term “push-pull perfusion” and begin using “micro-dialysis.” In any case, she has now, apparently, actually switched over, in spite of her essay explaining that micro-dialysis is a scientifically inferior method. The difference between the two procedures is the design of the tip of the tube. The restraint, surgical preparation, cannulization, and brain structure being probed are the same. It’s unlikely that the monkeys undergoing the ordeal could differentiate between the two.

You write: “Third, regarding oversight, you say its broken, I say its not broken. We both use evidence to back up our convictions.” You have no evidence. There isn’t evidence on your side of this particular point. Evidence looks like the USDA IG’s report and Plous and Herzog. If I’m wrong, please do cite a reference or two.

You must not understand just how unusual an illustration like this is in today’s journals. The university doesn’t discuss the details of its animal research in public. You know that as well as I do.

Thanks for pointing out the typo.

For the record, you stopped coming to our meetings on your own. You’ve never been turned away.

As you know, Eric, Rick is not interested at all in the oversight system.

As you know, Eric, Rick believes all scientists go to work in the morning thinking only about their paychecks... not really thinking about the diseases they are trying to cure.

This fact alone shows that he has never really understood why people go into Science.

By the way, who pays your paycheck Rick?

Plous and Herzog data are rather limited as nearly all applications are either approved as written, or approved subject to clarifications.

The correlation can simply break down because some IACUCs may be more or less familiar with some particular procedures.

You could ask why only 2% of the applications are not approved. I think one likely possibility is the fact that investigators already know ahead of time what is and what is not an acceptable protocol.

Of course, the IACUC is only one part of the approval process. Your research grant has also to be funded by NIH, and this is where the judging the scientific content of the grant is done. In addition, the animal protocol is also evaluated at this stage once again and needs to be approved.

So, there are several layers of protection and regulation in biomedical research in this country.

Finally, the Plous and Herzog data show that the critical determinants of having a protocol approved by the IACUC are the clarity of the research design and the description of the procedures. Protocols that do not explain exactly what is that they intend to do with the animals simply do not make the cut.

"...the IACUC is only one part of the approval process."

The IACUC is not "only one part." IACUCs are considered the key stone of the oversight system.

"... Protocols that do not explain exactly what is that they intend to do with the animals simply do not make the cut."

This is the opposite of what the authors found. They found that protocols approved by the home IACUC were unlikely to be approved by a second. The wrote:

"All told, 61% of protocols were judged as either "not very understandable" or "not understandable at all," as having "poor" research designs and procedures, or as justifying the type and number of animals in a way that was deemed "not very convincing" or "not convincing at all." [by the second committee]

More disturbing and telling than the dismal reliability of the protocol approval process as suggested strongly in Plous and Herzog is the simple fact that no one in the industry cares enough to do a follow up study. Vivisectors are unmotivated to examine their methods.

Given the fact that the oversight system is universally touted as a reliable safeguard whenever animal use is scrutinized or criticized, the fact that the data shows otherwise is yet additional and maybe among the best clear evidence that the industy is filled with liars.