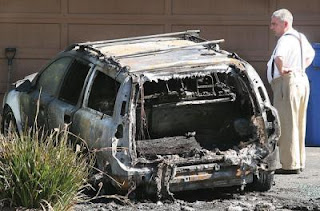 .... Assemblyman Gene Mullin, D-San Mateo, who has been championing legislation to increase civil and criminal penalties in cases where academic researchers are attacked because of their work, said Saturday that he was saddened and surprised by dual firebombings.

But, he added, violence against researchers has been on the rise; while condemning the acts, he predicted Saturday's firebombings probably would prompt legislators to move on the bill.

There is something smelly about all of this.

Researcher targeted in flyer speaks out

.... Pradip K. Mascharak, a 25-year UCSC researcher, said the crudely made flyers discovered Wednesday at a downtown coffee shop are misleading. As a chemist, he said he can't use animals in his research, which most recently has included creating a nitric oxide compound to treat skin cancer.

"They should have better things to do," Mascharak said Friday. “Are they stupid enough not to see that I am a chemist, not a biologist?"

No, I don’t think “they” are that stupid.

These events suggest to me that something other than animal rights activism is at work here.

First, information about who is doing what to animals is readily available on the Internet. It strains credibility to imagine that any animal rights activists wanting to target vivisectors are not familiar with the publicly funded and freely accessible online databases.

Second, the “crudely made flyers” are reminiscent of the “Islamic terrorists’” notes that accompanied the anthrax-ladened letters that we now know were sent by US Army employed vivisector, Bruce E. Ivins:

09-11-01
YOU CAN NOT STOP US.
WE HAVE THIS ANTHRAX.
YOU DIE NOW.
ARE YOU AFRAID?
DEATH TO AMERICA.
DEATH TO ISRAEL.
ALLAH IS GREAT.

Third, government has a long, rich, sordid history of just this sort of provocateurism.

July 31, 2008 Speaking at the Campus Progress journalism conference earlier this month, Seymour Hersh — a Pulitzer-Prize winning journalist for The New Yorker — revealed that Bush administration officials held a meeting recently in the Vice President’s office to discuss ways to provoke a war with Iran.

Iraq’s weapons of mass destruction are a case in point.

If you know much about the civil rights movement, the anti-war movement, or nearly any other progressive movement that has challenged big business or government, you will be able to add many examples of government’s and industry’s various underhanded often deadly manipulations of public opinion to the list.

The firebombings in Santa Cruz don’t seem like the work of animal rights activists; they seem more like the work of those who want to vilify them and who want to defend the very lucrative vivisection industry and by extension, all industries that exploit animals.
at 12:54 PM

Isn't it also convenient that a flyer was found only a few days earlier at a coffeeshop with names/addresses of researchers on it?

Do I see legislation being pushed through in response making it an illegal act to spread such information about researchers? hmmm... What a perfect impetus for such legislation.

You have planted the seeds of anger and hate, and now it is time to collect the fruit of your efforts.

Now, you can either call for the violence to stop or to accept the consequences of your behavior. Inventing a conspiracy theory will not help.

("Now, you can either call for the violence to stop or to accept the consequences of your behavior." Is this a threat? A sentence like this written to a vivisector by an activist will be seen as a threat and tallied as one regardless of what the real intent was.)

anonymous: You [Rick] have ... argued that violence is necessary if everything else fails.

LThis implies to me that you think violence is never justified (let alone a possible moral imperative.)

"You have planted the seeds of anger and hate, and now it is time to collect the fruit of your efforts."

It appears that the car that was firebombed may be owned by someone doing RNA research in yeast.

Sound like someone an animal activist would target to you?

I AGREE WITH RICK IF YOU WANT TO PASS A BILL OF SOME SORT YOU CREATE THE PROBLEM AS IN SEPTEMBER 11, 2001 OUR WARPED MINED GOVERNMENT ALLOWED THOSE TERRIOST TO BRING DOWN THE TOWERS OR THEY WOULD HAVE LISTEN TO CLEVELAND HOPKINS AIRPORT WHEN THEY SAID TO THE GOV. THAT THESE PLANES ARE FLYING WAY OFF COURSE BUT NO THE GOV SENT 2 UNARMED FIGHTER JET FROM THE COAST OF DETROIT, MI TO CHECK IT OUT WHY NOT SEND JETS OUT OF NEW YORK NO THEY HAD THERE PLANS A SUPPOSEDLY REASON TO GO TO WAR NOW WE HAVE ALL THESE NEW SO CALLED NEW LAWS TO PROTECT THE U.S.A YEAH..RIGHT. NOW OUR FOREFATHERS SOLVED MOST OF OUR PROBLEMS. EX. WE KNOW THAT IF THE PH IS OFF AN UNATURAL PRODUCT CAN BURN OUR SKIN. WE KNOW THAT WE NEED TO STAY OUT OF THE SUN OR GET SUNBURNED. WE KNOW THAT IF YOU TREAT CHILDREN BAD OR DEPRIVE THEM THEY GROW TO HAVE MENTAL ISSUES AND WE KNOW THAT IF YOU LOCK SOMEONE IN A DARK CLOSET THAT THE ONE WILL HAVE A MENTAL ISSUE AND TWO THEIR EYES WILL BE PERMANTELY DAMAGED. SO TELL ME WHEN HAS USING ANIMALS WHO HAVE NO VOICE AND BEING ABUSED AND RAPED, MAMED,AND MURDERED CONTRIBUTED TO OUR WELLBEING? AND YES I SAID ABUSED RAPED AND MURDERED because you will not take a human child and do that to and yes all animals are children that never grow up once you take them from their natural habitat they no longer have a home to mate and hunt so now they depend on humans to care and feed them like a NEWBORN BABY! These Primates and other animals follow OUR LORD AND SAVIOR JESUS CHRIST LAWS! WE HUMANS WITH OUR SO CALLED INTELLIGENT MINDS SCREW UP EVERYTHING IT'S ALL ABOUT ME ME SO TO YOU ANONYMOUS PERSON YOU TELL YOUR FRIENDS TO ENCOURAGE PEOPLE WITH COMMON SENSE TO RUN FOR GOVERMENTAL OFFICES FOR THE BETTERMENT OF LIFE NOT FOR THEIR POCKETBOOKS AND WALLETS BECAUSE THE CRAP THAT WAS GOING ON THEN IS GETTING WORST NOW AND ONLY GOING TO GET WORST SO LET US COMMON SENSE INTELLIGENT PEOPLE RISE UP AND SAY TO THE DRUG COMPANYS, CHEMICAL COMPANYS AND SCHOOLS LEAVE OUR ANIMAL FRIENDS ALONE AND PUT YOUR POSITIVE ENERGY INTO MAKING OUR SOCIETY A CLEAN A BETTER PLACE TO LIVE. PEACE CE.CE

No, I did not intend to threaten anyone.

I was simply pointing out that the violent revolution you always wanted is now here.

Yet, instead of celebrating you are quick to come up with a (nonexistent) conspiracy theory and assign the blame elsewhere.

You are repeating yourself. You leave my question unanswered.

Is violence ever justified?

Yes, I think violence is in extreme circumstances justified.

No, I think your cause is not one of those cases. I think you still have ample chances to legally challenge the experiments and to do your activism within the law.

Now you answer my question: have you ever asked yourself if your activism/rhetoric has led to the increase in violence? How would you feel once the first scientist dies from these attacks?

Btw, the likely perpetrators of the UCSC attack are some stupid students that listen to people like you and Vlasak.

I know of no more extreme a circumstance.

"I think you still have ample chances to legally challenge the experiments and to do your activism within the law." This has been completely ineffective for over 200 years.

"Now you answer my question: have you ever asked yourself if your activism/rhetoric has led to the increase in violence? How would you feel once the first scientist dies from these attacks?"

1. No. But thinking about it now, I doubt it but have no way of knowing.

2. Much less worse than I feel when I think of the millions of animals in the chronic restraints, the jackets, gnawing their arms, pucking their guts out, or going insane.

As I said, given the odd circumstances, this looks much more like COINTELPRO bs than wild activists to me.

"This has been completely ineffective for over 200 years."

The current violence will send you back 400 years back. Wait and see.

THIS IS FOR ANONYMOUS #1...OUR OWN GOV. LIED TO THE VERY SAME PEOPLE THAT VOTED THEM INTO OFFICE. NOW THEY TELL THE PEOPLE WHY WE REALLY WENT TO WAR.(I BET YOU DID NOT KNOW THAT THE FIRST SOLDIERS THAT WENT TO THE PERSIAN GULF WERE ORDERED BY THE COMMANDER IN CHIEF TO TAKE EXPERIMENTAL DRUGS TO SUPPOSEDLY PROTECT THEM FROM BIOLOGICAL WEAPONS..I BET YOU DIDN'T KNOW THAT NOW DID YOU? AND IT HAS MADE THEM SO SICK THEY CALL IT GULF WAR SYNDROME INSTEAD OF TELLING THE PEOPLE THE TRUTH. ALSO I WAS SITTING THERE LISTENING TO THE CLHA COMPLAINING ABOUT THE THOSE PLANS AND YES WE DID HAVE PLENTY OF TIME TO SHOOT THEM DOWN!! WE SHOT DOWN THE ONE HEADED FOR THE PENTAGON..I BET YOU DIDN'T KNOW THAT ONE EITHER. ANYWAY WHAT'S DONE IS DONE OUR GOV. LIE SO MUCH THAT ONLY 1/4 OF THE PEOPLE CAN HEAR THE REAL TRUTH.
Also I'm not putting the blame other than were it should go..you write and call and you write & call..etc. the people that you have voted into office about your concerns and you give them an idea of what you think the best solutions should be NOT SAYING WHAT THEY SHOULD BE DOING BUT JUST GIVING THEM AND IDEA ON HOW A PROBLEM CAN BE (POSSIBLY) SOLVED and what do these individuals do? Nothing. I look at this war in Irag and I listen to a case involving the Marines accidently bombing a village and killing an entire family of a young boy the boy was injured he needed care that Irag could not give him the Marines found out got the okay to fly him to England for life saving surgery and apologized to the young man (he now competes in bike races he has no arms now) but one of the questions that was asked how do you feel about Americans and he said like other Iragi children in similar situations..I HATE AMERICAN PEOPLE! So now what is happening is that you have more children growing to hate All Americans. Or check out the war in Africa our government has not gone to help those people, why? I think that violence is warranted in certain situations..as in the case of these inhumane jokers who in the name of science uses animals and if they were doing what is right then they would have nothing to worry about they would not be telling lies about someone is trying to hurt them and running up in their houses supposedly making threats...yeah right. FOR RICKS QUESTION..YES. SO YES I BELIEVE IN VIOLENCE TO ACCOMPLISH CERTAIN GOALS THAT WILL HELP ALL AND OUR FOUR LEGGED FRIENDS OR FREEDOM. ANONYMOUS #1BECAUSE YOU MENTION WE'RE IN A POSITION TO TALK YES WE MAY BE IN THAT POSITION BUT WATCH OUT HISTORY HAS SHOWN THAT WHEN WE TALK AND GIVE MONEY YOU GET STABBED IN THE BACK OR THEY SECRETLY BUILD BOMBS. Again I think that history has shown that talking up to a certain point gets you nowhere and violence gets the cause notice...maybe if we say to the gov. that we don't want our money involved in such act they'll say to bad YOU don't have a chose. We need to educate people with a very loud voice and since no one is hearing.. violence is the way to go unfortunately because only a few hear your voices. Oh yeah and Oprah's(hey she should get on board..she has a lot of clout and she loves animals). Again our society and the news only hear VIOLENCE...SAD ISN'T IT. ce.ce anonymous #2