These images were made during an August 2006 USDA inspection of the University of Wisconsin, Madison. They have just come to light. 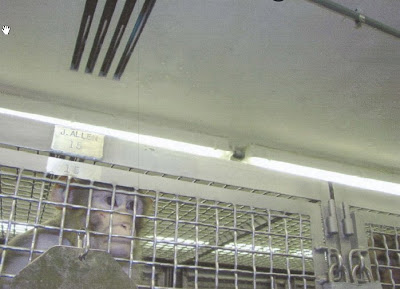 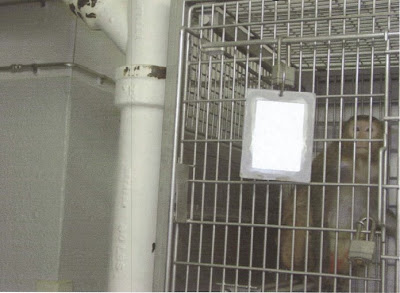 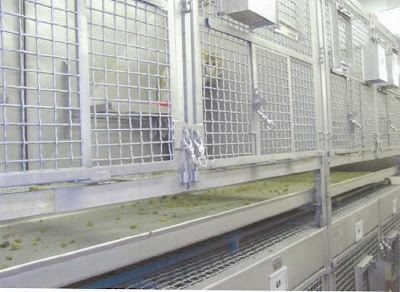 The image below shows a monkey who has gotten his or her arm stuck. 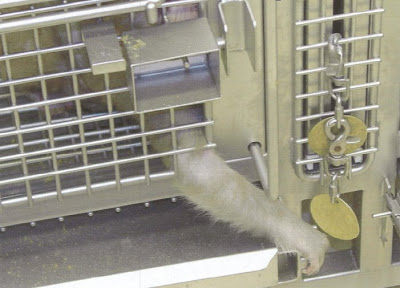 According to the inspector's notes:

In Building L, upon entering an animal room, this inspector noted that animal #r04046 appeared to have its arm stuck through the front of its enclosure. Upon further inspection it was determined that the animal was unable to free its arm. A later review of the animal's medical record revealed that the right arm had been trapped outside the enclosure on at least five occasions. The animal has been treated for swelling and/or trauma to the right hand and/or arm since 8/21/04. Although veterinary staff had been treating the animal the attending veterinarian was unaware of the persistence of the problem and no plans had been discussed to address the problem. Mechanism of direct and frequent communication is required to insure problems of animal health or behavior is [sic] conveyed to the attending veterinarian.

And, in another entry about the same situation:

In Building L, the USDA inspector observed animal care staff atempting to release an animal #r04046's arm through the front of its enclosure. After the lead technician was located and came to the site, he applied a tube and started to manipulate the arm in an attempt to free the animal. The arm was obvously swollen and in a few seconds of manipulation, the animal began to vocalize. The lead technician persited in manipulating the arm until the USDA inspector asked him to stop and to call the attending veterinarian. Handling of all animals must be done in a manner that does not cause trauma, physical harm, or unnecessary discomfort. The attending veterinarian anesthetized the animal and bolt cutters were used to release the arm.

This monkey had been getting his or her arm stuck and tramatized for two years and animal "care" staff couldn't figure out what to do about it except to let it keep happening. And this is the outfit that's going to find the cure for AIDS?
at 2:34 PM