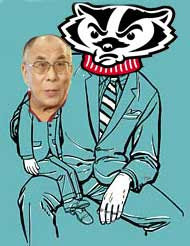 It isn’t a coincidence that the bogus living incarnation of Avalokitesvara, the Buddha of Compassion, chose to mention monkeys separated from their mothers when he addressed the crowd at the Coliseum in Madison. I haven’t seen a transcript, but have heard from those who shelled out the money to attend, that he is profoundly confused about the meaning of Harry Harlow’s cruel research on the maternal bond.

The Capital Times, a local paper, reports without comment:

Importance of mother: He cited studies where young monkeys separated from their mothers turned out angrier than siblings who stay with mom. “The most important person in your life is not teacher. It is your mother.” ("Words of wisdom from the Dalai Lama", 7/19/2008.

His Holiness is either a dolt or an ignoramus. In either case, he is the dupe of intellectually dishonest vivisectors and their supporters at the University of Wisconsin who diligently maintain the myth that Harlow’s work was in any manner or form beneficial to humans (except, of course, that it generated wages and income.)

I know they are dishonest because even when the historical facts are laid out for them, they continue to publicly defend Harlow’s work and claim that it was valuable to human well-being. It wasn’t. It did, however, demonstrate in spades that rhesus monkeys are as emotionally vulnerable as human children, a point the liars refuse to contemplate.

Let’s look at the facts.

Rene Spitz began his observational studies on large populations of human children in the 1930s. He described the contrasting effects of either being raised with a nurturing caregiver or being supplied with only adequate nutrition and medical care. He termed the results of maternal and emotional deprivation anaclitic depression or hospitalism. He reported that children raised without emotional warmth were retarded physically and emotionally.

Harlow’s defenders commonly assert that prior to his studies, parents were taught to maintain a hands-off approach lest they spoil their children. They were taught, the Harlow crowd asserts, to let the baby cry, not to pick her up, and not to coddle her.

There was a time when this line of thinking was promoted by doctors, but in 1946 pediatrician Benjamin Spock published The Common Sense Book of Baby and Child Care which became an instant best seller and is widely acknowledged to be the most influential source on child care ever written. Encarta notes that it “sharply redefined the course of child care during the baby boom after World War II.”

Here’s an excerpt from a March 16, 1998, The NewsHour with Jim Lehrer interview on the occasion of Dr. Spock's death. Dr. Stephen Parker is co-author of Dr. Spock's Baby & Child Care.

ELIZABETH FARNSWORTH: Were his ideas resisted, or were they pretty quickly adopted?

DR. STEVEN PARKER: Well, they were resisted by professionals, who, I think, had a vested interest in the advice [they] had been giving for the last twenty or thirty years. And this is quite different. But it was embraced by parents immediately in droves at a level that people had never anticipated. [My emphasis]

ELIZABETH FARNSWORTH: We just heard a little bit about the way he thought. Tell us more about his ideas and what was new and what was really important in them.

DR. STEVEN PARKER: Well, to really understand the success and impact of Dr. Spock you have to remember the context in which he burst upon the scene. Child-rearing advice at the time was an incredibly dismal affair. Parents were told don't touch your child, don't kiss them, don't hug them, feed them on a schedule, let them cry, prepare them for a tough world by not being emotionally involved. And he came to it saying, well, wait a second, trust yourself. No parent inherently feels that way. Do what feels right for you, and you probably won't go wrong. And he based it too on his ideas of the understanding of child development, which included the importance of attachment and the emotional relationship between parent and child, and most of all, children needed to feel loved. And if they felt loved, almost everything else would follow from there. That was revolutionary in 1946, believe it or not.

Then we come to John Bowlby. He was commissioned by the World Health Organization to study the mental health of children who were “homeless in their native country” in post-war Europe. He began his studies in January 1950. His report, Maternal Care and Mental Health was published by WHO in 1951. High demand necessitated a second edition, which was published in 1952. The first section of the report is titled “Adverse Effects of Maternal Deprivation.” The only mention of an animal study in his report is brief mention of an unpublished(?) study on goats by H. Liddell.

To understand the motivation for Harlow’s entry into this area of psychology, consider a passage from the 1962, WHO publication, Deprivation of Maternal Care: A Reassessment of its Effects:

The conclusion Bowlby reaches in his monograph is that the prolonged deprivation of the young child of maternal care may have grave and far-reaching effects on his character and so on the whole of his future life; and he draws the corollary that the proper care of children deprived of a normal home life is not merely an act of common humanity, but essential to the mental and social welfare of a community. His indictment on the score of the nurseries, institutions, and hospitals of even the so-called advanced countries has contributed to a remarkable change in outlook that has led to a widespread improvement in the institutional care of children.

While the practical effects of Bowlby’s monograph in the realm of child care have been universally acknowledged to be wholly beneficial, his theoretical conclusions have been subjected to a considerable amount of criticism….[My emphasis]

By the time Harlow began his two-decades long series of grotesque and monstrous deprivation, isolation, and separation studies, the known effects on human children were unequivocal, well and widely known, and their prevention a matter of common practice.

And yet, the Dalai Lama, the UW’s dummy, claims that something important was learned from Harlow’s work.

He’s right in a way. We learned that rhesus children are as fragile as human children. We learned that any cruelty, no matter how pointless, is defended by the vivisection community and their ilk, and we learned that there is no bottom limit to the depravity that vivisectors will engage in.

And, in the aftermath, we've learned just how intellectually dishonest they can be.
at 1:10 PM