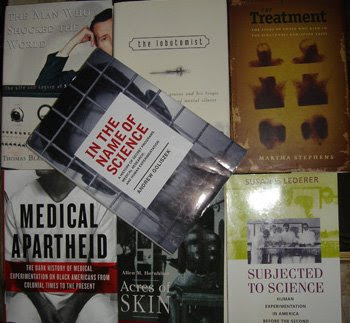 "[P]ractically every present day protocol for the prevention, treatment, and control of disease, pain, and suffering is based on knowledge attained through research with animals." California Biomedical Research Association

Claims like this are ubiquitous in the propaganda defending animal experimentation. They must be written and published by people who have very limited knowledge of medical history.

In fact, human experimentation has been widespread and extensive throughout history. Claims that modern medical knowledge, practice, and treatments are primarily the result of animal experimentation conveniently overlook and disregard the many human research subjects used by scientists and doctors.

In very many cases, as chronicled in the books pictured above, these research subjects, the “human material,” have been slaves, the poor, prisoners, blacks, orphans, retarded people, and the elderly. In some cases, they’ve just been duped. This research has been carried out by lauded scientists and doctors (like Marian J. Simms pictured here) 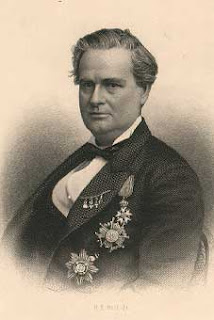 who have ridden to fame and fortune on the backs of the weak and defenseless. This body of work has contributed significantly to medical knowledge.

Claims that medical advancement has been dependent on animals is not only incorrect but also denies and thus discounts and demeans the suffering of the human victims of medical science whose health and lives have contributed to our body of medical knowledge.

There are parallels between the industry’s historical use of humans and current use animals.

the ambitions of the scientists had/have precedence over the well-being of the research subjects;

notoriety and/or financial benefit were/are common motivations for the research;

defenders warned/warn of an end to medical science if the status quo is disturbed;

only in hindsight do mainstream journals and medical science organizations criticize the treatment of research subjects;

criticism was/is dismissed out of hand;

Books pictured above include:

The Man Who Shocked the World: The Life and Legacy of Stanley Milgram
by Thomas Blass
From Publishers Weekly: "In the early 1960s, Stanley Milgram conducted a series of famous experiments proving that average citizens would readily inflict painful electric shocks on strangers if they were instructed orencouraged to do so by an authority figure." This explains the willingness of research assistants everywhere to hurt or kill when directed to do so.

The Lobotomist: A Maverick Medical Genius and His Tragic Quest to Rid the World of Mental Illness
by Jack El-Hai

The Treatment: The Story of Those Who Died in the Cincinnati Radiation Tests
by Martha Stephens
From Publishers Weekly: "From 1960 to 1972, a grisly and highly suspect research project was carried out in the bowels of Cincinnati General Hospital. Cancer patients, most of them in advanced stages of the disease, were exposed to massive quantities of radiation over long and continuous periods of time. Nearly all of them (over 100 altogether) died within weeks or months of the start of the irradiation 'therapy.'"

Subjected to Science: Human Experimentation in America before the Second World War (The Henry E. Sigerist Series in the History of Medicine)
by Susan E. Lederer
New England Journal of Medicine: "Lederer's writing is crisp and clear, her historical documentation is exhaustive, and her social commentary persuasive. This book is an important addition to the growing literature on the history of human experimentation and medical research."

Acres of Skin: Human Experiments at Holmesburg Prison
by Allen Hornblum
From Library Journal:
"Relying on prisoners' firsthand reports, Hornblum (urban studies, Temple Univ.) has written a thorough account of the questionable medical experimentation carried out in Philadelphia's Holmesburg Prison from the mid-1940s to 1974. Research on everything from cosmetics to chemical warfare agents was conducted there, often with minimal or no record keeping."

Medical Apartheid: The Dark History of Medical Experimentation on Black Americans from Colonial Times to the Present
by Harriet A. Washington
From Publishers Weekly: Starred Review. "This groundbreaking study documents that the infamous Tuskegee experiments, in which black syphilitic men were studied but not treated, was simply the most publicized in a long, and continuing, history of the American medical establishment using African-Americans as unwitting or unwilling human guinea pigs. Washington, a journalist and bioethicist who has worked at Harvard Medical School and Tuskegee University, has accumulated a wealth of documentation, beginning with Thomas Jefferson exposing hundreds of slaves to an untried smallpox vaccine before using it on whites, to the 1990s, when the New York State Psychiatric Institute and Columbia University ran drug experiments on African-American and black Dominican boys to determine a genetic predisposition for 'disruptive behavior.'"
at 10:28 AM