Arthur L. Rosenbaum, a pediatric ophthalmologist and researcher at UCLA's Jules Stein Eye Institute, has embarked on a series of experiments using rhesus monkeys that will cause severe and extensive suffering. He has come under increasing pressure to abandon these experiments. According the L.A. Weekly, some of Dr. Rosenbaum's experiments have been gruesome.

Most notably, Rosenbaum’s have involved shooting Botox into the eyes of fully conscious rhesus monkeys. In another case, when a vervet monkey was strapped in a metal cage, the terrified animal reacted by biting its tongue, banging its head, and chipping its teeth. The monkey wounded itself so badly that it had to be euthanized. On the less tragic end, mice were given shots of Accutane, a drug used to treat acne, which helped advance gene therapies for blind Stargardt’s patients.

The L.A. Weekly article, "Monkey Madness at UCLA" is subtitled "Violent radicals aim to kill Jules Stein Eye Institute researchers who test on animals." You should read the article for yourself. The quote above is the only hint that readers are given concerning Rosenbaum's experiments on animals.

Oddly, he seems to have returned to animal experimentation after a 20 year hiatus. His currently funded study, "Lateral Rectus Reanimation following Sixth Nerve Palsy," -- using macaques -- has funding for four years, 2004 through 2008. There seems to be no record of Rosenbaum using animals since 1987, in spite of the L.A. Weekly comments about the injections of Botox, Accutane, or the vervet that was killed. (A vervet is an African monkey species. Although, given the fact that UCLA has a large vervet colony, this makes some sense.) He seems never to have published anything related to rhesus monkeys, vervets, or mice. Between 1977 and 1987, he published at least five papers detailing his experiments on kittens:

The effects of two types of prolonged oxygen supplementation were tested in the kitten model of oxygen induced retinopathy. Thirty-one litters were placed in 80% oxygen for 65 h starting the 3rd day after birth to initiate a moderately severe retinopathy. One-half of each litter thereafter served as controls, remaining in room air during the development of the retinopathy. In the remaining half, the retinopathy was allowed to develop in either a variably hyperoxic/hypoxic environment (one-half of each of 16 litters) or in an oxygen environment that was gradually reduced to room air by 4 wk (one-half of each of 15 litters). The retinopathy scores in the controls were comparable in both studies and the same as in previous experience with this model. Kittens exposed to the variable oxygen recovery environment had significantly less severe retinopathy than their room air recovery littermates (p less than 0.05). The retinopathy scores in the group with gradually withdrawn oxygen did not differ from the littermate controls (power greater than 80%). These data support the hypothesis that conditions of oxygenation during the recovery process from an acute oxygen-induced vascular injury have a significant effect on the healing process.

The effect of tocopherol (vitamin E) on oxygen-induced retinopathy was studied in 75 kittens following the development of a 12-point scoring system to quantitate the degree of retinopathy seen at three weeks. The tocopherol was found to be beneficial when given daily from the day of birth (P less than .0001) with oxygen exposures of two to three days (79% FiO2) beginning on day 3. Caution is urged in applying these data to humans because (1) hepatosplenomegaly was noted in the treated animals, and (2) the kitten model for oxygen-induced retinopathy is not entirely satisfactory.

One of the claims in the L.A. Weekly article, is that "UCLA is credited with a breakthrough for curing visual loss in patients with the eye disease known as Stargardt’s," and that Rosenbaum injected mice with Accutane, a drug used to treat acne, "which helped advance gene therapies for blind Stargardt’s patients." If any of this is true, it ought to be publicized more widely because currently there are no clinical trials of gene therapy for Stargardt's taking place, and moreover, Rosenbaum is not named as an author in any published rsearch on Stargardt's.

One website has this to say about the condition:

Low Vision Care: Stargardt’s patients respond well to magnification. Simple bifocals may be used in the early stages. In later stages, CCTV systems are helpful. It is important to maintain good cosmetic appearance for young patients. Mobility is usually minimally affected. Some Stargardt’s patients can become bioptic drivers, but it may be for a limited time.

Hum, they don't seem to be talking about a cure. The 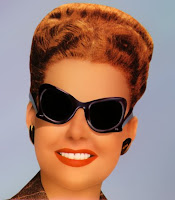 At present there is no cure for Stargardt’s disease and there is very little that can be done to slow its progression. Wearing sunglasses to protect the eyes from ultra-violet (UV) and bright light may be of some benefit.

Hum, people at UCLA are known for their cool sunglasses.
at 12:35 PM