To the best of my knowledge... 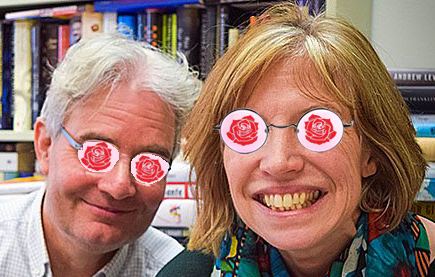 About a month ago I wrote about trying to get locally-based NPR host, Anne Strainchamps (that's her on the right in the picture above) to ask UW-Madison professor Richard Davidson about his continuing involvement in the use of young monkeys to study the neurobiology of anxiety and fear during her live public interview with him. He was promoting his new book promoting meditation. He and the university cultivate his public persona as a personal friend of the Dalai Lama's and a man of compassion. Unless pointedly asked, he never mentions the young monkeys frightened, hurt, and killed in that part of his work.

Ms. Strainchamps didn't ask him about it; she left her audience in the dark.

I used to think that thoughtful people who don't care about animals just hadn't taken the time to learn and think about the likelihood that they have inner lives and experience a range of emotions that are probably similar to ours. But that was before I took off my rose-colored glasses.

The unfiltered world is bleak. It is filled with people like Richard Davidson who not only believe that animals share emotions like fear and anxiety with us, but exploit those similarities and get rich from doing so. I think people who hunt likewise imagine the animals' fear and pain. Certainly this is true for other horrific activities like dog and bull fighting.

On the Saturdays I work, I sometimes catch Ms. Strainchamp's show on the radio. Its called "To the Best of Our Knowledge - Exploring the Deeper End of Ideas." This past Saturday, the show was titled “Loving Bees.” (A cause du jure rather than a concern for small animals?) In any case, the program featured a brief interview with a neuroscientist who had some interesting ideas about the mind of insects, something I've also written a little bit about.

Here's a transcript from part of that section of the show: “How Do We Wrap Our Minds Around Bee Consciousness?”

Anne Strainchamps: “Every couple of months, it seems like, there’s some startling new discovery about bees intelligence.... for Christof Koch, a neuroscientist in the field of consciousness, the moral is never underestimate the intelligence of another species...”

Christof Koch, : “...yes, I do believe, and I try not to kill bees or other wasps or other insects anymore, that it feels like something to be a honey bee, and it probably feels very good to be dancing in the sun light, it feels very good to have access to some nectar and be able to drink that and carry that back to the hive.” ...

I’m talking about the potential for sentience in individual bees, that’s correct, because a priori, there is no reason to exclude them. Why, because they can’t talk? Well, lots of people can’t talk. Babies can’t talk, patients can’t talk. That’s rather arbitrary, because they don’t have a human brain? Well, that’s completely arbitrary. So it’s very difficult on any fundamental grounds to presuppose that they are totally different from us. And of course they share a lot of the basic metabolism, a lot of the basic machinery of the brain they share with us. They have action potential, they have neurons, they have ionic channels, they have neurotransmitters, they have dopamine, just like we have, they have some of the same reward circuitry that we have...”

Interviewer and the program's Executive Producer, Steve Paulson, also in the photo in the image above: “So brain size is not the be-all and end-all here of consciousness.

Koch: “That’s entirely correct. There’s no principal reason to assume that brain size should be the be-all and end-all.”


I don't know, but I'll wager that no one associated with the show will alter their behavior toward animals as a result of this expert opinion that it feels like something to be a bee. No one had much doubt that it felt like something to be an Indian or a slave, and yet the most highly educated people in colonial America bought and sold slaves and killed Indians and took their land.

There is something odious about educational and news programing that does not seem to affect even the people producing it. It has to have something to do with the altitude of their lofty towers; the rarefied atmosphere somehow interferes with putting two and two together. To the best of my knowledge, in most cases no amount of data is sufficient to sway the opinion, let alone behavior, of someone with a vested interest in the status quo.