A fairly frequent observation made by anti-cruelty activists is that universities are secretive about the experiments they perform on animals.

There are two boilerplate responses from the vivisectors: 1. We have to keep the details secret because people who care about animals are generally terrorists, and 2. There is nothing secretive about our work; we publish the details in scientific journals.

Admittedly, these positions seem contradictory, but then, they also claim to care about the animals they keep caged, poison, maim, and kill. The mental gymnastics needed to keep such diametric realities somewhat balanced accounts for the wild look you can sometimes see in these people’s eyes.

I am intrigued by their claim that the details of what they do to the animals aren’t really a secret because they publish reports of their work in journals accessible to anyone who will take the time to seek them out – implying, it sometimes seems, that the crazed loonies pointing to this alleged secrecy won’t even take the time to do a little research on their own.

And after all, the university vivisectors sometimes claim, they work for an educational institution – disseminating knowledge is what they are all about. Funny.

Speaking from the perspective of one of the loonies who actually takes the time to read these reports and who also reviews the in-house descriptions of the experiments contained in the required protocol submissions to the oversight committees, I can say unequivocally that the methods described in the published papers are mere shadows of what is explained in the protocols. A comparison of those documents would be an interesting topic for analysis. But here, I want to point out a humorous fact about the vivisectors’ claim of transparency by way of published papers.

Obviously, if one wanted to learn the details of what, say, the scientists who were breaking the law killing sheep by rapidly decompressing them, were doing to the sheep, one might want to read the papers those scientists had published.

And, if the university where those experiments were occurring was proud of that work, or at least forthcoming, even if not necessarily truly interested in educating the pubic, one might imagine that they would readily provide the titles of the papers those scientists had published. After all, the universities say that those published papers are a clear demonstration that they aren’t hiding what they are doing.

Here are some examples of their pride and transparency (click on the image to see a larger view): 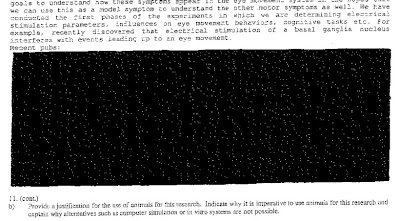 This one is particulary interesting:

As far as I can tell, this censoring was done to the document that was sent to the Dane County District Attorney by the university during the DA's investigation of the sheep decompression killings.

These redactions are just silly. Silly and stupid in fact. In the censored passage above, the university apparently believes that blacking out this reference will keep it secret. Why would they want to keep it a secret? The vivisectors involved in this research, the authors of this secret paper in fact, are well-known, and we sent the DA copies of these authors' papers.

Why would the university black this out if they A) are proud of the work they do, or B) they are transparent and forthcoming about the experiments on animals they perform? The answer to A and B seems likely to be C) they worry about the embarrassment they would have to endure if the vivisectors' neighbors learned the truth, and C) they want to keep the things they do a secret.
at 6:08 PM