Is Brian Blanchard a Racist or Just Under Bucky's Spell?

Is Dane County District Attorney Brian Blanchard a bigot or is he just overawed by Badgers in white coats?

There is some evidence that he may be racially bigoted. This was suggested in a recent letter published in the Wisconsin State Journal:

I am struck by District Attorney Brian Blanchard's apparent unequal treatment of unnamed researchers at the UW-Madison - even though he acknowledges their illegal killing of animals by "decompression" for decades - and Jorge Iglesias, whom Blanchard has charged with 13 felonies for staging cockfights.

Blanchard says Dane County can't be bothered to prosecute the UW researchers. Is the university above the law? Could Iglesias' ethnicity have played a role in the unequal application of the law? Cruelty is cruelty.

Another letter noted a similar and possibly racial disparity in Blanchard’s decision to give UW researchers a pass:

When Michael Vick violated the law by mistreating and killing dogs, he was fined and served prison time. When UW-Madison was exposed for violating Wisconsin law by killing 26 sheep by means of decompression, the judicial system refused to fine or prosecute.

In his letter to the university, in which he explains his non-reasons for why he doesn’t care whether they break the law or not, he makes some pretty goofy and uninformed statements. Rather than go through each of them, no matter how entertaining that might be, I wanted to point to one particular bit of university nonsense he regurgitates in his conclusions:

"Peer reviewed articles demonstrate that [this research] has not been hidden from public scrutiny."

Compare that statement with a passage from a copy of the most recent version available to the public of the university-approved protocol for these experiments:

That big black redaction appears to be a citation of one of the articles not hidden from public scrutiny. They must be proud.

Maybe Mr. Blanchard isn’t a racist or in awe of white coats. Maybe, like many Madisonians, there isn’t anything that the university does or could do that he would criticize. Maybe he just worships Bucky. 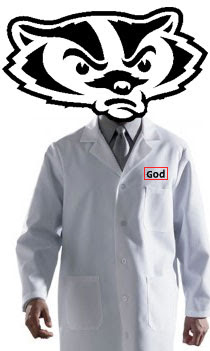