Memories of Dorothy and Intent 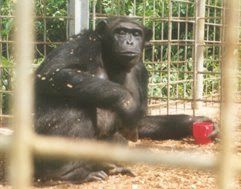 In Loving Memory of Dorothy

Between 3:00 and 4:00 pm on September 22, 2008 our sweet, sweet Dorothy died. She died from what appeared to be heart failure in a forested enclosure, surrounded by the chimpanzee family who loved her.

Dorothy spent at least 25 lonely years, and probably closer to 40 years, chained by her neck before a daily parade of people at an amusement park - people who thought it hilarious that she would beg for cigarettes and savor the butts they threw at her. After the first ever armed confiscation of primates in Cameroon in May 2000, Dorothy enjoyed eight years and four months at Sanaga-Yong Center surrounded by people and chimpanzees who cherished her.

I met Dorothy when she was still chained to the tree. 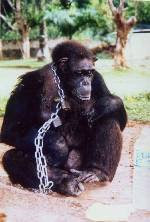 A hundred feet away Nama was chained by the neck to a steel bar driven into the ground at the center of a barren circle of well-worn earth. 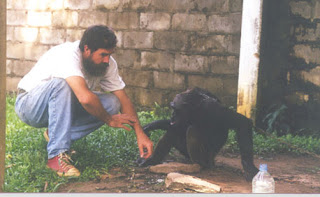 I got to be with them again about a year later after they had been rescued. They were very lucky to have discovered by Dr. Speede.

Thinking about Dorothy and Nama's years in chains made me think again about intent.

Intent is commonly used as a blanket excuse for much of the harm we do to others. Richard Davidson, for instance, appeals to the Dalai Lama's position that good intentions excuse the experimental brain surgeries and fearful experiences Davidson and his colleagues subject young monkeys to. This position seems to be essentially universal in the vivisection community.

The hotel owner probably wanted to entertain his guests. His intent was not to hurt the chimpanzees and monkeys he had chained, but to make his quests smile and laugh; and by all accounts he was successful. But I don't think his good intentions were sufficient to justify the suffering he was causing.

In the best case scenario, a vivisector genuinely believes that the work they are doing is the best chance for developing a treatment, cure, or prevention of some malady, but why is the very slim chance of success considered an adequate excuse to hurt an animal, while entertaining people isn't? Why should knowledge be given higher status than fun and excitement? 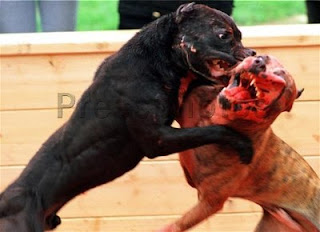 Why should dog fighters be imprisoned but vivisectors be lauded? 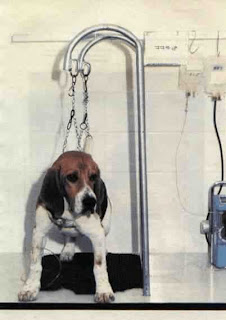 Maybe the answer lies in the numbers. It might be argued that some advancement in healthcare could benefit many people while a sporting event entertains only a relatively few. We should keep in mind too, the therapeutic effects of being happy, 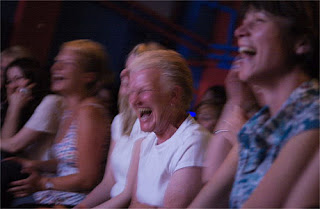 so if watching a dog or rooster get mangled makes someone happy and improves their health, why is it that even vivisectors sometimes decry staged fights or slaughters?

Intention can serve as a universal get out of jail card in some circumstances. Good Samaritan laws protects us somewhat from unintended or inadvertent harm we might do if we are trying to help someone in an emergency.

Few people are likely to support the idea of kidnapping the neighbor's child to provide one's own child with a new liver. But what about paying for a piece of liver or a kidney? It is generally considered unethical to pay for an organ, yet the black market organ dealers could be acting with the best of intent. Why should their motives be viewed as less moral or ethical than the motives of someone who hurts and kills animals in the pursuit of arcane biological minutia?

Intent does matter but it is not a universal excuse. When we accidentally hurt someone or even kill them, the legal consequences are justifiably less severe than if we are caught intentionally harming or killing someone.

So back to Dorothy and Nama. Why is the intention to entertain considered an inadequate excuse but the intention to cure is considered adequate? This seems ethically out of balance; it suggests that either animal fighting is good or that the rest of the harm we visit on animals is bad. I don't see a logical and consistent way to reconcile these contrary positions.

Consistency seems to require that we embrace vivisection, factory farming, and bull fighting, or else, that we call all of it atrocity.
at 12:59 PM

You ask this question under the assumption that lab animals are treated the same way that those fighting dogs.

This is obviously not true.

The comment above is from almost exactly ten years ago. I don't know why I didn't respond.

Anonymous says it is obvious that "lab animals" are not treated as poorly as dogs used in dog fighting.

Hum. Researchers have been staging fights between animals for many years. They have intentionally starved animals to death. They have denied them sleep for long periods of time for fear of receiving electrical shocks. How should we weigh these burdens to the animals?

It isn't at all obvious to me that it is accurate to say that "lab animals" are not treated as poorly as dogs used in dog fighting.